A co-worker isn’t so dim after all. 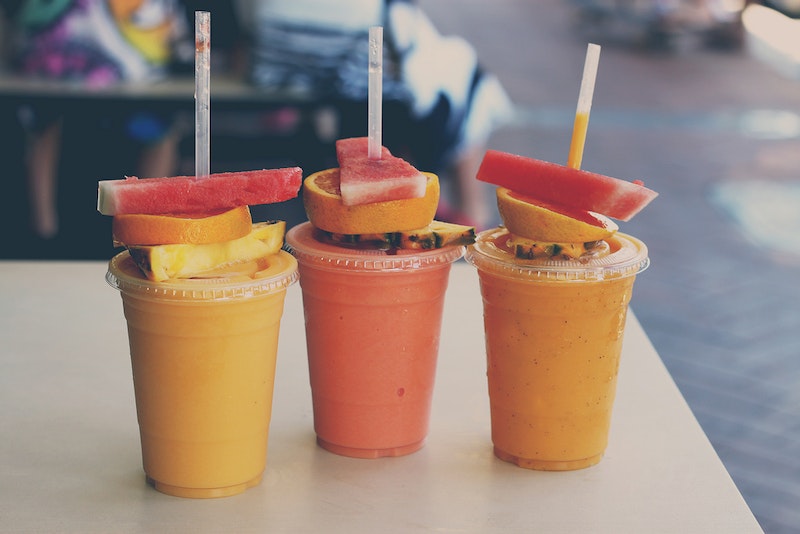 It’s my second week on the job and Steve asks me to come to the juice bar this afternoon. He knows it’s a school night, he says, but it’s really an emergency. It’s the end of my senior year, so I’m not too concerned with my grades. “Thanks for coming in on such short notice,” Steve says. “That’s the sign of a good employee.”

I throw my backpack behind the counter and take off my tie. School had just let out 20 minutes ago. “Happy to help, Mr. Marlowe.”

A skinny girl with peroxide blonde hair walks into the juice bar. My khakis and blue button down contrast against her torn jean shorts and bleach stained flannel shirt. She looks at Steve with derision. “This is Alison,” Steve says. “She’s your new co-worker. You guys are in the same grade, I think.” He looks around at the empty store. “I’ve got to run some errands. Be back in 30.” Thirty minutes means at least two hours in Steve-time. We don’t have many customers, so it’s not difficult to run the place without him. I pretend I’m the owner when people do walk in. “But you’re so young,” they always say. I shrug. “I suppose I’m just entrepreneurial.” I’m very modest about my fake accomplishments.

“So you’re the new victim?” Alison asks when Steve leaves.

“I just started, yeah. I really only work the Saturday afternoon shift, though. I’m just filling in today.”

“That’s what you think.” She takes off her backpack and tosses it with mine. I hadn’t even noticed she was wearing one. It’s the smallest backpack I’ve ever seen. I doubt it could hold more than two textbooks. “You’re stuck with this shift now.”

“But doesn’t it already belong to someone? Joan, right?”

“She got fired last week. Didn’t Steve tell you?”

At noon, he texted me saying that Joan called in sick. I nod at Alison. “Yeah, but he didn’t give me the details.”

“Steve caught her giving away a bunch of free smoothies to our friends.” Alison shuffles behind the counter and slides open the fridge. “Strawberries,” she mumbles. “If you ask me, Joan’s lucky. I wish I didn’t have to work here.”

I walk over to the sink and wash a pile of blenders, mainly so I can have something to do with my hands. “Why don’t you quit?”

“I have expenses,” she says. It’s clear she spends all her money on weed. “And I’m saving up my tips. I want a tattoo.”

“Hey Steve.” I throw my backpack behind the counter. A month has passed and I’m still working Joan’s shift. Alison walks in 10 minutes late.

“Not much,” I say. “Some dude ordered a smoothie with just berries, and then he returned it because it had too many seeds.”

Her denim shirt is torn at the left shoulder, and I can see splotches of black through the hole. “Did you get your tattoo?” I ask. She smiles. “Oh yeah, I did.” It’s like she had forgotten, and my question was a pleasant reminder. She sticks her left arm out of her shirt. “Check it out,” she says.

A tiger stares at me. It stretches from the top of her shoulder down to her elbow. I had expected something small—a Chinese character meaning “earth” or “unity” or something like that—placed discreetly on her ankle or hip. There’s nothing discreet about this tiger.

“Why a tiger?” She pauses, then shrugs. “I don’t know. I wanted a tattoo, and tigers are sweet…” I can’t figure out Alison. I assumed she was an artist until she said, “Paintings suck. Please tell me, what is the point?” Then I assumed she was a hipster, consumed with the local music scene. When I asked who her favorite band was, she said, “Um, I like Snoop Dogg, I guess. Well, I don’t know any of his songs, but he smokes a lot of weed.” Environmentalist? Animal rights activist? Both ideas were shot down when she walked into work with a Styrofoam container filled with fried chicken. She didn’t even recycle the box.

“Alison,” I say. “I’m so curious: what do you want to do with your life?” She looks like she’s never been asked this question before, let alone taken the time to consider an answer. “I don’t know,” she says. “I’ll probably be a social worker. Or a teacher. I don’t really care which one.”

And then I realize it: Alison’s most notable attribute, above everything else, is her utter lack of ambition. At first I look down on her, this girl content to pass quietly through life, never inclined to step out of the machine, never interested in declaring herself special. But then it’s clear I’m the fool. Alison doesn’t need riches and power and fame. She’s already happy, content with her place in the world. Isn’t that the goal?