The Age of the Comedown 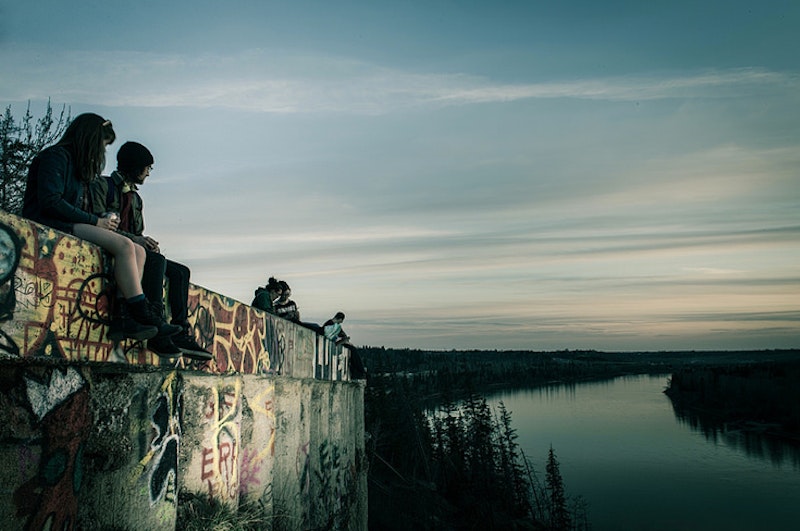 Bret Easton Ellis’ elaboration on “Generation Wuss” in Vanity Fair—his name for the generation born from the late 1980s to the early 2000s—is pretty much spot-on, although at this point hardly unique. Millennials are over-sensitive, narcissistic, unrealistic and anxious. No mystery why: we grew up in the midst of an unprecedented end-of-the-century party in the Western World, when the money rolled right in and as he says, there were more jobs, and, “[Generation X] had the luxury to be depressed and ironic and cool.” The Internet hadn’t yet castrated the music, entertainment, and print industries, and there was a run of relative peace. The economy was booming and our Boomer parents over-compensated for their lack of love or means in their own childhoods by spoiling many of us rotten. Christmases and birthdays were mammon—the grossness and pointlessness of our materialism wasn’t even visible to me until our family friend Michael Gentile walked into the room my brother and I shared in New York in 2002 and remarked dryly, “Wow… you have a lot of… stuff.” I’ll never forget the shame I felt immediately, because he was right: I spent more hours with commercial objects and gadgets than I have with any person in my life. I’ve spent the majority of my waking life on a computer.

Gold stars for everyone, promises that you could be whatever you wanted when you grew up, and that you could have anything you wanted if you worked hard enough: it was incessant until 2008, when the grown-ups clammed up and couldn’t tell up from down, shirking responsibility for the economic catastrophe caused by Wall Street and a culture of consumption and commercialism that believed it was immortal and invincible. There are still no answers and no new models as the old ones die before our eyes.

Ellis’ critique and sympathy of the Millennial mindset is nuanced, considering that his boyfriend is 27. He says the biggest fight they ever had was over Tyler Clementi’s suicide, the Rutgers student who jumped off the George Washington Bridge four years ago this month after his roommate recorded him hooking up with another boy. The roommate tweeted about it and posted the video online. Ellis thinks this was a “pretty harmless freshman dorm-room prank,” which is insane, given how often he implores people within and outside of this article to keep things in context. Okay, first semester of freshman year, this kid—whose sexual orientation undoubtedly caused him an enormous amount of stress, anxiety, loneliness, and pain growing up in the aughts—is finally able to be sexually active and true to his biological imperative, but before he can catch his breath, he’s exposed and mocked by his own roommate for the whole school, and by proxy the world, to see. I’m amazed that Ellis maintains his position on this issue, because it’s clear to me that this is a severely damaging blow to the psyche and self-esteem, coupled with a new environment which, one month in, knows what you look like naked—it’s not an exaggeration to say that this would drive a person in Clementi’s position insane, and his suicide wasn’t really surprising.

What Ellis cannot comprehend is the unspoken certainty amongst people my age that the world will not make it to 2100. There is just absolutely no way—climate change, earthquakes, massive expulsions of methane, radioactive fallout, dramatic terrorist attacks—and the human experiment is nearing its end. It’s not pessimism, but it’s easy to forget that the Cuban Missile Crisis was only 52 years ago next month. That’s a blip of human history, and it only takes one loon, or a group of organized and legitimate loons and psychopaths in positions of power to orchestrate mass death or total annihilation. Let’s assume we all behave ourselves and refrain from blowing or mutating everything away: there’s a consensus in the scientific community that climate change is at too advanced a stage to stall, and its effects will be irreversible and make coastal cities uninhabitable very, very soon. Ellis is 50; he’s in the September of his years. He’ll most likely be fine, and he doesn’t have to worry about what the air in Los Angeles will be like in 2067. When pressed, Boomers blow it off as sophomoric fatalism and go on about the sanctity and durability of life. They can’t help it—that was their world, their narrative. We’re living in the Age of the Comedown, and very soon everyone will be feeling it worse than they could’ve ever imagined.