Praise Be to Listerine Jesus 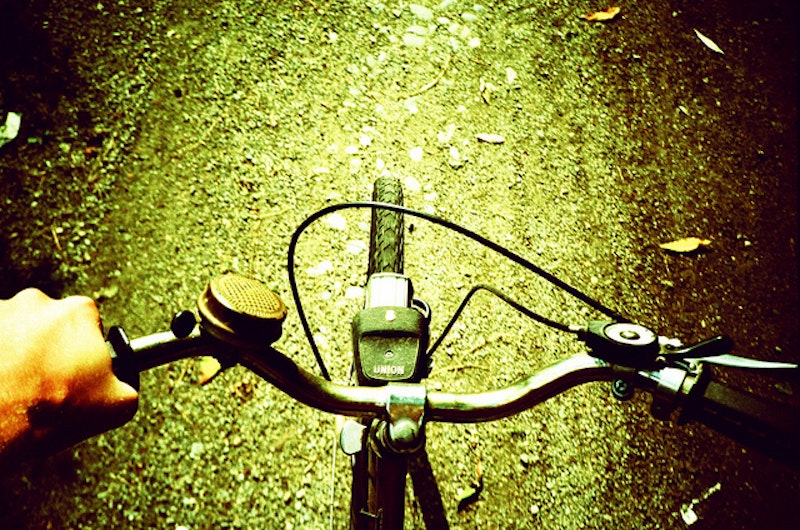 “Why are you stopping?”

Jared, racing on his bike behind Michelle down Falls Road, saw that she had stopped up ahead by the entrance to the bike path where a bearded guy stood between the posts. Cars steadily passed him on the left. His brakes had been worn out and squeaking since their Texas bike trip. He tried to stop but the brakes refused to stick. Skidding, his bike glided toward Michelle’s. In a last effort, he tried to swerve by her on the right at the exact moment when she pivoted onto the path. The man had moved aside.

Jared flew head first into one of the posts. His bike disappeared from under him. In the air, he felt the ghost of when he crashed south of Mackinaw the previous summer. His helmet smacked the pole and then hit the ground with a cracking sound. His shoulder, wrists and knee suffered the fall. Jared was on his back looking up at a frightened holy man—the impression given by his coarse bushy crown of hair, Biblical robe fashioned of modified white tees, heavy chain belt and yellow hospital socks in flip flops.

On a park bench altar he’d arranged an offering of children’s books, Bibles, malt liquor, two cans of a six-pack of Natty Boh, and various dollar store items. The man with wide eyes stood shivering like he had been condemned. “Not you,” Jared explained. “I wasn’t talking about you. I was talking to Michelle—I wasn’t even really talking to Michelle. It’s just that I crashed before and I have post-traumatic stress disorder.”

Michelle drowsily got up onto her knees. The man helped her to stand. “I saw her,” he testified. “She stopped completely and then you came crashing into her. When you screamed, ‘Asshole,’ I was like, oh no, what has happened? He thinks it was me.”

“Yeah. I totally should not have said that. I was freaking out. Michelle and I sometimes get in fights on the road. But that’s no excuse. I’m sorry.”

They looked the bikes over. Michelle hobbled over to Jared’s bike: the chain was off, a wheel bent, and the handlebars completely turned around. The saddle had snapped off and tossed into the grass. The man strong-armed the handlebars while Michelle re-attached Jared’s chain. Michelle’s bike was a survivor. The collision had merely misshapen a fender and knocked a wheel out.

“Here, let me give you $20 to get your bikes fixed,” the man offered. Michelle and Jared’s eyes met for a second. “Aw. Thanks. No, that’s okay,” said Michelle. “We wouldn’t want to take your money.”

“No, trust me. I want you guys to get them fixed, or at least use it to get home.”

“It’s really all right. We’re just going to get picked up.”

“You could get a drink at the bar.”

The three had lifted the bikes and rested them against the poles. It was obvious that Michelle was in pain. “Are you okay, Michelle?”

“My hip and elbow hurt, and I have cuts and scrapes on my arms and knees.” She looked disoriented, saddened. She had bike grease all over her hands. “Here, have these two beers. It’ll take the pain away.”

“We really shouldn’t. Besides you’ll want them later,” Michelle said.

“Nah. I got mine.” The man pointed to the malt liquor bottle. Then he stowed the cans of Boh in her pannier. Michelle looked again at her hands. She had been trying not to get grease all over her dress. “I got this Listerine here that’ll clean your cuts and start to take that grease off.” It was an unopened bottle.

“Yeah. Give it a try, Michelle. It could prevent infection.” Michelle consented hesitantly, yielding her arms forward. The two lowered with the bottle while Jared stood by and took in the surreal sight along with the awkward eye contact and muted hellos of passing bikers and joggers. The holy man performed a crude baptism. He poured the Listerine on Michelle's arms and knees.

“And I got this bar of Irish Spring.” It came fresh from the box. He placed the bar into the cup of her palms and doused more Listerine on top of it. He instructed her to rub her hands together around the bar and let the Listerine and soap perform their magic. It looked a little like she had bent her head to pray. “Here. Get a good lather going. Yeah, let the lather do the lathering. You got to lather the lather. No harder!” He assisted her in the lathering. “Now you need something to dry with. Here I have this.” He came back from the altar with a dubiously stained Ninja Turtles t-shirt for a towel.

Jared could see the stains but was too awed to say anything. Blind faith. Michelle and Jared were ready to walk their bikes down to the shop at the bottom of Falls. But then Listerine Jesus had Jared’s saddle in his hand. “We got to get this back on. I can do it.” He began by placing it on the wrong way. Michelle could tell it was wrong and tried to show him, but he was adamant. Jared said he could just carry the saddle and walk the bike. “Nah. We can get it. I just need something to hammer it on.” He dashed away and came back with a boulder of poured concrete and proceeded to bash the saddle. Sparks flew but it wasn’t going on.

“Thanks! We’re going to hit the bike shop now before it closes and then get picked up,” Jared interrupted, stepping in to grab the saddle and his bike. “But you have been so helpful. What’s your name?”

“Fucking Asshole! No, I’m kidding, but a name is just a name. Blood is thicker. I’m glad you two are okay. Get on down to the shop now.” Michelle and Jared took off. Right as Baltimore Bicycle Works was closing and employees were moving some bikes inside, Michelle caught the attention of her friend who worked there. They dropped the bikes off and then limped down Maryland Ave. toward their favorite Indian restaurant, the one thing they had been looking forward to after a day of biking. Michelle reeked of a mint patch on an Irish cliff.