That Final Hour of Sun

I decided to walk 14th St. as far as it would take me. 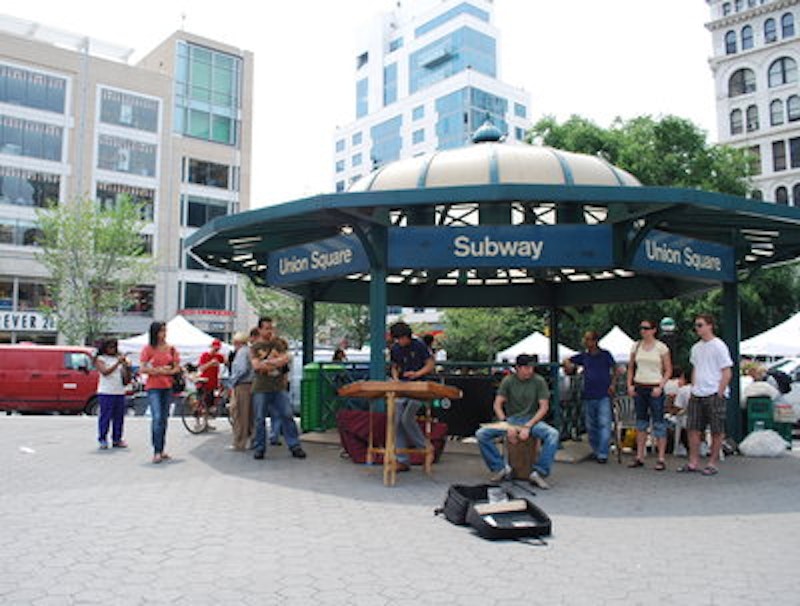 Yesterday, going up Broadway, I took a long walk from my apartment in Bushwick to the Williamsburg Bridge. I stopped at Dotory for my favorite pork dumplings and kimchi. I crossed the bridge to the Lower East Side where I turned right from Delancey to Clinton St. I stopped in the 6 & B Community Garden lush with meditational flowers, bushes, vine-covered trees, vegetable plots, pavilions and private nooks. Volunteer workers, mostly elderly women, hosed everything in sight or weeded, calling out to each other and cracking jokes. I read some Edith Sitwell in a chair with the vegetables at my back. I grew paranoid that someone might spray me with the hose. I shot up and kept moving.

I next passed diagonally through Tompkins Square Park attracted by the day-job rocking of a community band called the Meetles who finished a familiar 1960s jam. The lead singer resembled Al Roker. During their break, I put two bucks into the bucket and then wandered to sit on a bench to read. A curly-headed, pudgy teen distracted me with his unbridled enthusiasm for classic rock. The boy reported to his patient mom tidbits of band trivia pertaining to the Who, the Rolling Stones and the Beatles. Al Roker waddled over to the bench after the boy asked him to perform a certain cover in the next set. “We’ll get to it. Might not be right away, but we’ll get to it,” Al assured the boy. The warmth of this exchange provided me a convenient stopping point in my reading. Edith Sitwell in A Poet’s Notebook had been bombarding me with inspirational quotes and passages (truth bombs) exploding with modern poetry’s significance to the world.

I decided to walk 14th St. as far as it would take me. Then I hit the majestic Union Square and was attracted to its congregation of misfits. I went in. The police guarded every few feet of the perimeter of the park. Yet unnecessary barricades were set up in case protests might take place. But not much of anything was brewing except for a few mostly white and Hispanic women with placards in the lexicon of #blacklivesmatter. These caring souls met with hugs and high fives.

At the park’s edge facing the Duane Reade, an old sage in sunglasses with a cane paraded agitatedly, spouting off lead-paint politics and religion through a racial/tribal/national lens. Spitting at a backdrop of cops, the dreaded preacher delivered a sermon, finding rhythm with his stick. Like Trump, he couldn’t keep China out of his mouth. “They’re already surpassing the military powers of the U.S. and Europe, and economically China is crushing them. It’s because their people come from a long line of formidable warriors. And they’re not the only ones. Count the nations—India, South Africa, numerous islands—that have shaken off the white imperialists.” Turning toward the cops, he shouted, “I have faith. Faith! As it says in the holy books,” revealing razor teeth and prattling off a litany of prophets whose ancient teachings supported his analysis. Serial anti-abortion activists with black and white “Love Jesus” signs watched the man in awe of the attention he demanded. I admired his white suit and hat. The cops maintained composure. I felt like they drew strength and resolve from putting on an unfazed, cheerful aspect. I thought of Danny Glover’s catchphrase: “I’m too old for this shit.” That’s how I read the cops, but most of them were on the younger side.

Then I walked a bend to the right and was impressed by a shaded box of the Hare Krishna people, all sitting cross-legged, with painted faces and silk robes. They found communion in lackluster singing, a drone of accordions and weak drumming. The tallest, most personable and least glazed guy of their band was tasked with outreach—that is, sucking people in with literature, smiles and small talk. But he was not a Siren. Much like the plague of charity muggers, this embarrassing, bald gentleman complimented my beard as if that would be enough for me to consider a religious upgrade. No thanks. It triggered my memory of when a hype man in Times Square tried to hand me a strip club’s card and said, “They’d love that beard in there, man.”

I turned my back on the Krishna and jogged off to a long stretch of the park’s exterior. Two gentlemen entertained me by operating pencil-legged puppets to Jamaican twerk music. The pop prince marionettes looked like tiny Michael Jacksons in vests. No amount of eerie jiggling could sustain my interest, and so I determined to go deeper into the Square’s center. I had to pass a seated group of people eyeing me as I hopped up steps under a tree canopy. This one fortyish guy smoked a cigar, flanked by mellow, matronly women with purses and crimped hair. He acted as a Sphinx. “I have just one question. Do you think black lives matter?” I gave him thumbs up. “Is that a yes?” I nodded my head. “My man, that’s what I like to hear.”

I relocated to a far edge to sit on the lawn next to a partying group of young post-college types on picnic blankets. Some were lining up to bat a piñata. The grass gave off a shit smell. A few day-drunks and exhausted laborers sprawled in invisible coffins. Cops down on the street guarded this elevated area too. One in front of me looked like he could spend years not bothering a fly. His eyes did all the work. How did he not get bored or cramped? In my reading I got to another good stopping point. The lawn dampened the seat of my pants and the tree irritated my back. I got up.

I followed a populous cobbled walk to an area of benches in the shape of a lung. People were kissing, reading, relaxing and entertaining their children with popsicles and ice cream. I started to read again, standing up because a philosopher arrived on the scene. He was about 30. He held a black bag down at his thigh. Like the earlier preacher, he spouted off his own brand of racial diatribes mixing history with language (Greek and Latin), philosophy, and science. He professed to be smarter than everyone around. “I read everything in Barnes & Noble and then some. White professors don’t have shit on me. They all want to argue and then when a thinking black man shows up, they’re all quiet.” He could pick through history, myth and ideas with a speed and fluidity akin to rap.

Then he yelled at a black woman for dating and publically kissing a white guy on a bench. “Don’t you know how the white guys used to treat women of color? You weren’t treated like no queen. White colonialists showed up in ships and would use binoculars to find the most beautiful women of color to subjugate.” The couple laughed and pretended not to see him. They sat through five minutes of his shit to demonstrate unflappable love.

He next picked on me. “I see you reading those old 19th-century novels. Guess what? We already read them, too.” I kept my eyes glued to Edith Sitwell’s pages and muttered her musings on poetry to myself.

He’d already moved on to lambasting other “white pseudo-intellectuals who fear his genius.” It got weirder when he denounced the push for LGBT rights as a government conspiracy against “his people” and invoked the virtues of the Zulus, savoring how they dispensed with the arrogant Boers. In the absence of engaged listeners, his barking flagged and the clarity of his words diminished. Everything came out clipped, a broken record. He ended on some men’s rights activist nonsense, idolizing hunter and gatherer societies, and repudiating French feminism. I left.

I walked more on 14th St., past Avenue of the Americas. I finally wound up in sight of the Chelsea Market in the vicinity of the Meatpacking District. I saw where Google has an office. I avoided an old-as-dirt steakhouse riddled with bad Yelp reviews. I also observed that urban legend was indeed fact: homeless-looking dudes used the state-of-the-art “Links” to surf porn. In Chelsea Market, I wanted a hot dog but didn’t get one. Then I went outside to a calm and clean park with a view down to the Hudson River. I was satisfied with church-whisper company for a change, resting dogs and groups on blankets with wine and books, basking in that final hour of sun. I kept reading at the pinnacle of my travels until I closed the book and decided to turn back home.