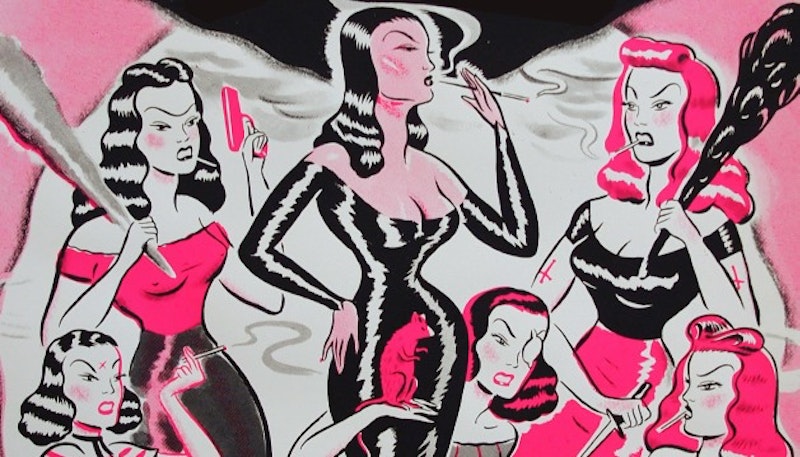 Recently, I had a group conversation online about The Massachusetts Independent Comics Expo's decision to rename their Crumb room. Some old-guard comics types were concerned that Crumb was being erased from history. Others, many of them women, felt that MICE was taking a progressive step by acknowledging that many creators don't find a "Crumb room" welcoming. Eventually, one Crumb proponent, as a "joke," shared a link to a Crumb panel, in which a tall, aggressive woman tells a standard issue sweaty nerdy Crumb dude to take out his penis so she can cut it off. All you women who don't appreciate Crumb are castrating bitches.

Crumb is sometimes praised for including strong women in his comics. But "strong women" aren't necessarily a sign of feminist commitments or sympathies. The image of strong, castrating women can simply be a way for masochistic men to top from the bottom by eroticizing, mocking, and delegitimizing women who criticize them, or who just don’t pay enough attention to them. If powerful women exist only to make men feel a certain kind of way, are they really powerful? Or are they caricatures that can and are meant to be used against real women who get out of line?

Ryan Heshka's Mean Girl's Club: Pink Dawn (Nobrow Press) is, if not directly Crumb-influenced in its gender politics, then at least Crumb-adjacent. The retro-pulp story, a sequel to the 2016 Mean Girls Club, involves a group of violent, curvy women in tight clothes who smoke, drink, and defy the porcine Mayor Schlomo and his Moral Majority allies, Prophet Grandly and Eldress Krunt. The Mayor blackmails a good girl handywoman, Roxy, into infiltrating the Mean Girls Club. It’s rendered in energetic black, white and pink, with thick, visceral lines squirming across deliberately off-kilter layouts. No one can keep these mean girls caged in the tedious patriarchy of the grid.

That patriarchy is both ill-defined and vaguely nostalgic. Kelly Sue Deconnick's Bitch Planet sci-fi series engages consciously with systems of mass incarceration and policing, surveillance, and sexual abuse of women of color. Mean Girls Club is more vague and less pointed; it takes place in a generalized retro-1950s setting, and what exactly is at stake in the Mean Girls' rebellion is neither precisely clear nor exactly relevant. Sexy, mostly white girls drinking and smoking is presented as a threat to a patriarchy that’s simultaneously inept, trapped in amber, and oddly benign. There's no hint of racism in this small pre-civil rights town, nor much expressed homophobia. Straight, cis, conventionally attractive (mostly) white women act tough and defy taboos. That's the revolution.

Or at least, it's the revolution as a particular strand of American comics culture has seen it. Set in a sort-of past, Heshka recapitulates the primal scene of American alternative comics, in which the repressive forces of church and state attempt to destroy the sexy, violent pulps. The Mean Girls, in this case, aren't so much fighting for feminist revolution as they are battling for the freedom of comics creators to draw sexy women doing violent things. The sequence at the end of the comic in which the club's leader, Pinky, is transformed by drugs and electric chair into a gigantic Frankenstein Hulk monster is the tell. Liberation is embracing over-the-top horror tropes and Marvel-esque superhero memes. The victory over the forces of repression isn't so much a victory for women as a victory for comics.

Heshka does step away form Crumb and towards Bitch Planet in a few important respects. Mean Girls Club's female characters don't have a lot of distinguishing characteristics, but the fact that they're all together in a group is nonetheless significant. The book easily passes the Bechdel Test; women talk to each other about drugs, booze, killing guys, and beating each other up. Roxy—the one character who has real development—first betrays the other women, but eventually embraces the power and virtue of sisterhood. "I sold out my sisters for blood money I'll never see!" she declares at her moment of awakening, before exclaiming, "can't turn my back on the club!" The final sequence, in which the giant Franken-Pinky offers Roxy the mayor's severed head as a substitute bowling ball while the rest of the club members raise their beers, is a gross-out heart-warmer.

"More concerned with women's oppression than Crumb" is not a high bar, but Heshka does clear it. It's possible that someone could excerpt a panel from Mean Girls Club as a way to harass or silence women critics, but the comic doesn't lend itself to that kind of open misogyny in the way that Crumb does. At the same time, Heshka's vision of feminist revolution, like Crumb's, is couched, subtly, in a celebration of male imagination and male freedom of expression. Are we feeding the patriarch to his pigs in order to usher in a world where women are free, or are we feeding the patriarch to his pigs because drawing a fat guy getting eaten by pigs while sexy women watch is funny and sexy?

The two motives don't have to be exclusive. But comics history suggests that they don't always dovetail either. Guys drawing women castrating patriarchs doesn't mean the end of patriarchy. It can just be a way for some other asshole to grab the phallus for himself by proxy. Mean Girls Club isn't terrible. But as revolutions go, it doesn't break out of that same familiar room.