I understand the old country ways. 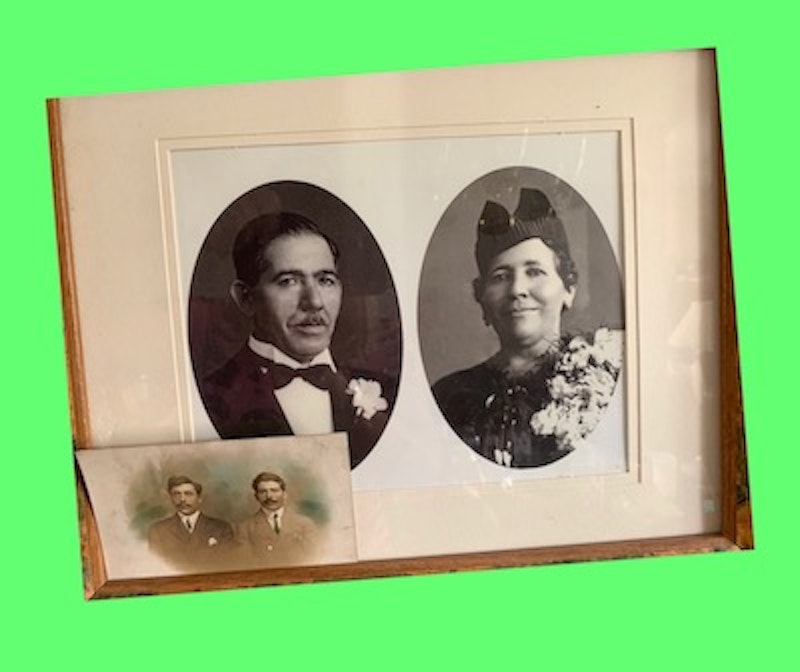 As written in the old family Bible. The combined chronicles of generations compiled by birthdates down to the final hour. A documented record of family history. It’s like a holy scrapbook photo album of permanence through the decades, even centuries of genealogy. I never met my grandparents on my father’s side of the family. There are no memories of them, only the stories handed down. On my mother’s side, I lived with the Monicos, the only grandparents I ever knew. I was a baby when my father’s parents died but there are a lot of photos like the one above and stories that tell a rich history.

My father’s father came to America in 1909 and his wife travelled here a year or so later, and had a miscarriage on the ship coming to meet him. In those immigration years they had 15 children on Proctor St. in Baltimore. His name was Joseph and he ran a shoe repair shop a block from the tiny row house. They came from a small village in Enna called Calascibetta, part of the island of Sicily.

Because of close proximity to Northern Africa and nearby Arab regions it was a strategic trade route for military and commerce. The island was conquered many times over the centuries since the reign of the Roman Empire. I have the mixed blood of many cultures and ethnicities. I've never had a proper DNA ancestry test but I’m sometimes curious to discover my origins. Sicilians don’t choose sides when it comes to conquerors or allegiance to any group or party. This is probably why the fascists and their leader during WWII, Benito Mussolini, went down in flames. He was executed along with his family in the town square. I don’t condone or condemn mob rule. There are a lot of parallels today with regard to the world stage and similarities with its leaders.

Another claim to fame or infamy is the Sicilian Costa Nostra. The mob, the organization, syndicate, outfit, whatever name you give it. It’s always organized crime. Like today’s global socio-political monsters of world domination, its origins blend right in with international gangsters like the Russian mob, the cartels of Mexico and South American or the crew right here in Washington, DC. There’s little difference now compared to the early days of the extortion rackets, jackbooted thugs sporting swastikas, the gangs of New York, the bootleggers of the roaring 20s, the wild west or the lawless corrupt politicians in positions of power today. It leaves no doubt about dirty money and the men with blood on their hands who take it. There are worse things than the Sicilian mafia, like the war machine, prisons for profit, or the monopolies of new online enterprises.

I recently had the pleasure of visiting with my Aunt Mary, my dad’s younger sister and the last surviving second generation of the original DiVenti family, her daughter Santa Maria and Cameron her nephew and son of her brother Franny. Aunt Mary had a feast ready upon our arrival and it reminded me of the old days when all the family gathered to eat Sunday dinners or crab feasts. Aunt Mary married Frances Wallace, a proud handsome Scotsman. He passed on a few years back. Their son Frances  (Franny) Wallace is an accomplished pro bagpiper and plays many weddings, funerals, birthday parties and other festive events. I gladly give my cousin an endorsement.

Aunt Mary told many stories about our family and the grandparents I never knew. She told us of my grandfather’s arrival in Baltimore in 1909. His teenaged brother accompanied him. When they arrived at the Baltimore Harbor, the younger brother refused to get off the ship, preferring the company of friends he met onboard who were continuing to North Carolina. A big fistfight between the brothers ensued and my grandfather told his sibling that their mother entrusted him to take care of him. If he didn’t get off the ship he’d never speak to him again. Years later, in the 1940s after WW2 a military envoy arrived at my grandfather’s door to tell him his brother was dying and requested his presence so he could see him one last time and make peace.

My grandfather told the navy messenger he didn’t have a brother and that he didn’t want to see him. He wished him peace, gave the messenger a drink, and politely told him no. That’s how Sicilians are. They never forget and hold grudges, real or imagined, for a lifetime. I understand the old country ways. But I’ve also learned to let go of all the negativity that can slowly devour your life. I hope to go to Sicily someday and look up my people. As the years grow short and America slowly eats itself with greed, senseless violence and hatred, it sounds like a good idea to go back where you came from.