Still Decking the Halls in Manhattan 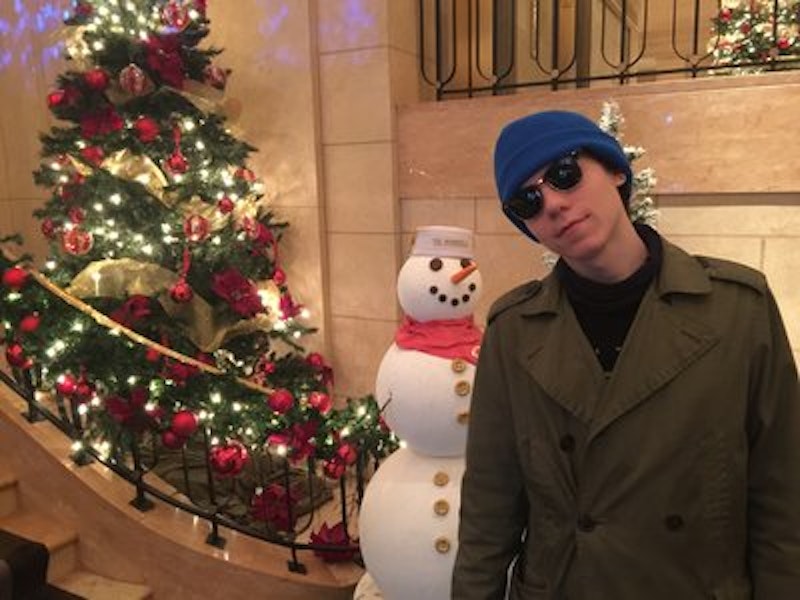 The first thing I noticed upon arriving in Manhattan earlier this week on a short road trip with my sons was that all the fancy stores on 5th Ave. had yet to take down Christmas decorations. Coming from Baltimore, where it’s not uncommon to see houses lit up and Rudolph/Santa/Nativity set pieces on front lawns as late as George Washington’s birthday, you’d think I’d be immune to a prolonged holiday season. And though we still haven’t chucked our own Christmas tree to the curb—trimming is a lot of fun, putting away the ornaments for another year is a pain in the ass—the gaudy, some uncharitable grumps might say garish, display inside and outside of the exquisite Peninsula Hotel at 55th and 5th struck me as very, very odd. Could be that’s always been the case, but when living in Manhattan for many years I certainly don’t remember this reluctance to turn the calendar page.

Maybe it’s a trend! After all, when riding up the elevator on Tuesday morning with a young woman wearing exotic fur ear muffs who frowned and gave me a two-sentence synopsis of global warming terror, I refrained from reminding her that it was January, and instead grimly nodded an assent. (Nor did I inquire as to whether the animal whose pelt she was wearing had been ethically slaughtered.) The city was quiet, snowy and windy, and I couldn’t summon the will to assure her that while the climate swings are indeed quirky, and perhaps eventually catastrophic, it wasn’t likely we’d all perish in 10 years. My son Nicky the Worrywart would disagree, so I didn’t disturb him as he hunkered down with a 1950s-style room service breakfast of eggs, bacon, toast and potatoes, with an anecdote that might’ve had him reaching for the Pepto.

Visiting NYC in January is a mixed proposition: the upside is that the streets are fairly uncluttered with slow-walking tourists, and the obnoxious tramps hustling for fivers are less evident (though I’m still flabbergasted when a well-scrubbed adolescent asks me for “any spare change, man” and gets pissed when I decline, reminding me of those nasty, and less healthy, Haight-Ashbury hangers-on in the early 1970s), but on the other hand chances are high that way-below freezing temperatures will put a damper on your agenda. That’s not to say the city’s at a standstill: the Matisse “Cut-Out” exhibition at MOMA was wall-to-wall on Tuesday, and so chaotic that we were first shuffled to the Robert Gober retrospective which, risking philistinism, left me as cold as his bathroom/kitchen sink installations (not to mention the dick-themed ceiling-to-floor murals that’d make for very unsettling wallpaper) and we killed too much time at that wing, which left Nicky restless, understandable since he had an unannounced appointment at downtown’s still-extant Other Music on 4th St.

Booker and I also wandered into The Strand—he’d never been and I figured that as a prolific consumer of fiction it was an important visit, since who knows if the institution won’t be priced out for another GAP in two years—and though I haven’t been myself recently, it was jarring to see the legendary churlish staff all smiles and racks of geegaws right as you walk in. I purchased two Sam Lipsyte books, The Ask and the hilarious collection of stories The Fun Parts, new and below Amazon-prices, which I’d never gotten around to, and highly praised by my college-student son. Accustomed to the ever-shrinking catalog at Barnes & Noble, Booker was transfixed, and could’ve spent hours at this other sort of museum had we not promised to meet Nick a few blocks down the road.

I make no apologies for charting (a common theme for observers over the age of 40) the rapid Malling of New York as it hurtles toward the generic commerce of every other major city, but I still get a charge when riding in a cab in midtown on the West Side and marveling at the Hong Kong-like proliferation of billboards and exploding advertisements, even if I’ve no idea what’s getting hawked. It’s so alive, at least up in the air. And, again coming from Baltimore, where there’s not even a passable Chinese restaurant I can think of—in fact, with a few exceptions, there’s not much in the city’s culinary quiver, save for crab-related dishes—it’s delightful to have a meal at an only slightly tired joint like Shun Lee Palace, where the three of us made a gut-stuffing meal of mushrooms, dumplings, Hunan beef, Chinese broccoli and spicy shrimp. And on Tuesday night, we met my nephew Quinn—a Greenpoint resident who returned on Sunday night from the holidays at his folks’ house to a 40-degree apartment, due to a Con-Ed fuck-up—at the swanky Korean restaurant Jung Sik in Tribeca. Quinn made the right call, and as he’d been there a few times previously ordered for the table: delicious, if tiny portions, of cod, crispy pork belly, octopus, tuna carpaccio, steak and duck, all accented by drops of soy-pepper marinade, anchovy aioli, truffle sauce and the like. It was a relaxing evening as my boys talked about music with their cousin (I was the odd man out on the electronica front), and we all caught up on the doings of our far-flung extended family.

On Wednesday morning, just after six, I walked down 55th to get coffee and ran into Nicky on my way out of a glorified bodega. Almost instantaneously, both looking at Twitter on our phones, we stared at each other in disbelief at the Charlie Hebdo terrorist murders in Paris. Back at the hotel, Nicky switched TV channels for five minutes—any longer and it gets ridiculously repetitive—to get the drift of the horrific attack. We had an Amtrak to catch, so like a drill sergeant I instructed both boys to comb the room for incidentals—books, chargers, errant receipts that an unscrupulous Peninsula employee might get his or her hands on—and were back in Baltimore in a jiffy, where it was no warmer than New York.