This Was My Girlfriend, Kind Of

A moment when I felt dumb by a water fountain. 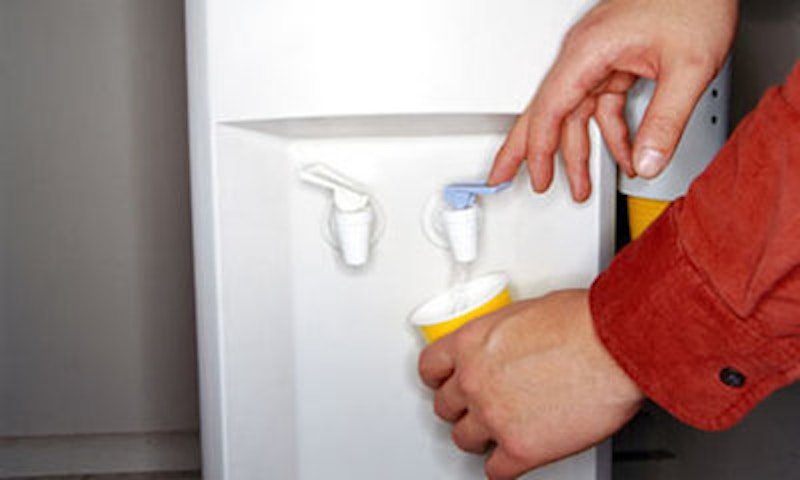 I knew this dumb woman who made me angry. I was stuck in this dumb office and couldn't function. It's like I was shell-shocked, permanently that way. But I had to grope along and find a path, make a living, say things to people in elevators. For me it was rough.

The office was a trade paper and we had heavy deadlines. The managing editor had big plans but let things slide, so at the last minute somebody had to process the ton of copy that was just then handed in. I was a last-minute processor, and the work hit me hard. Coping with it was an achievement, so I prized that; I could tell myself it was like surfing in rough water. But living it took something out of you, and we had the rough deadlines over and over.

One day it was late and we'd put a big issue to bed. I looked forward to two days of nothing much, a weekend. I stood off by myself, turning the knob of a water fountain and recognizing that no water would come out. Thus, by myself, I enacted the day or week I had just spent. The newspaper was not a place where things went right.

Then I was disrupted. Somebody broke my concentration. I had to face a winsome, slight, pear-shaped woman with a neck like a tuning fork; her cheekbones were painfully carved points of ivory, and she had a quiff of brown-gray hair hanging rakishly over her forehead.

“I don't think you can expect any water that way,” she said, head lightly tilted. She was being winsome and patient.

I weighed the moment. There was no way I could explain the situation: that I liked being by myself and making fun of the day while my head rang. How do you sum that up? How do you explain the aloneness? Nobody is supposed to be alone.

So I smiled and shrugged. I accepted the situation as she drew it: that I knew no better and was a child in a daze. I didn't know how to explain otherwise. And if I couldn't explain, I couldn't proceed; that was my inner reasoning. I was always waiting for permission, especially in social things.

I knew her for eight or 10 years after that. We worked at the same place and then we stayed in touch. She was supposed to be my girlfriend, more or less. She thought so, my ex-lover at the office thought so, the guy I'd worked next to thought so. She was seven years older than me.

I never managed to like her, not for long. But she's what I had, more than anyone else. That was my late 30s. I've always regretted knowing her.

“What they want,” says the first, looking for words. “What they.”

“That's the aim. 'I am here, looking like a woman.' They go to a lot of trouble. The effect doesn't come naturally, all right? They contrive it.”

Pause. “No,” the first person says. “Distinction, no.”

“I mean, this is something they put forward.”

“They are being them. I'm going to draw that, that's the line.”

“The person putting on the dress, he or she is. She is them. That's the person.”

“And you start there.”

“Naw, no. Look, you know.” The second person considers. “I start with me. It works better that way."