The nun was terrifying and a slut-shamer. 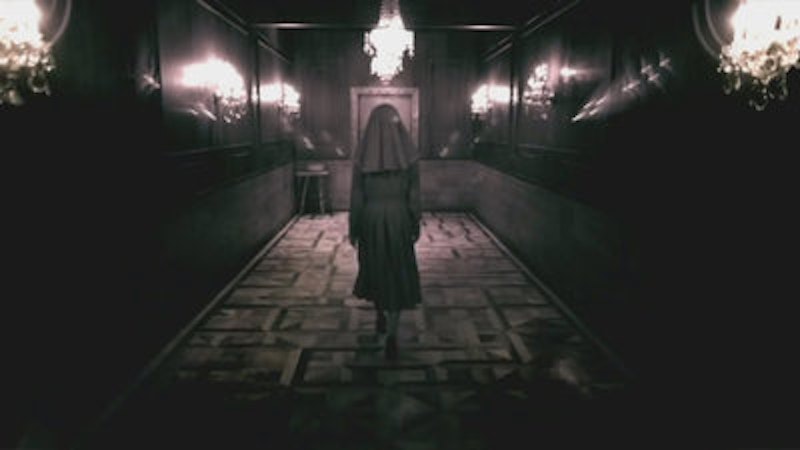 I’m a survivor of nine years of Catholic School. In the first eight, I experienced mostly benign nuns, The Grey Nuns of the Scared Heart, who lived in a convent beside our school. They all had short, cropped hair, support hose and comfortable shoes. Sister Nancy was my favorite because she was funny, a rare quality for these women who wore wedding rings because they were “married to Jesus.” By the 1970s, most nuns wore street clothes, though several wore a nun-uniform dress oddly referred to as a “habit,” but most were hip enough not to wear the matching habit veil head cover.  Many of our nuns had double names like “Sister Rose Francis” (a terrible math teacher) and Sister Somethingoranother of the Little Flower. Only the principal, Sister Saint Katherine, was a scary, humorless woman whose office it was best avoided.

After graduating from Mother of Divine Providence, I began high school at Archbishop John Carroll, in the suburbs of Philadelphia. The place was all-girls on one side and all-boys on the other; they were joined by the library and the cafeteria. The only time we were allowed any interaction with the boys was at recess, a place I remember scoring my first real boyfriend, a red-headed football player named Billy who tried to feel me up after we went to see Eddie and the Cruisers, barely sliding into second base and not even coming close to rounding toward third.

My first recollection of entering the long, dark hallways at Carroll was the opening welcome session in the auditorium. The principal made general announcements about class schedules and activity sign-ups, then introduced teachers and staff.

“And this is Sister Loretta,” she said, “our disciplinarian.”

She motioned to her left on the stage, and out from the shadows, a woman stepped into the light. Clearly unaccustomed to a spotlight, Sister Loretta squinted her narrow, beady brown eyes to issue a semi-wave to the room full of 13-year-old girls; it was really more of a toss in our direction, without benefit of an accompanying smile. She was over six feet tall, with large man-hands, comfortable black shoes and a perpetual scowl. My good friend Laura reminded me recently that she and I immediately began calling her “Lurch,” an obvious nickname for the unfriendly giant. What is a disciplinarian? I remember thinking at the time of her introduction.

It turns out that a disciplinarian is what happens with the meanest, nastiest nun with the requisite butch haircut is too old to teach but not quite ready to go out to rosary-praying, Jesus-sister pasture. They take this nun, buffered by many decades of making young Catholic students hate things like science and English, and put her in charge of socks. That’s right, socks. The knee-high socks of any good Catholic high school girl are expected to be exactly that: knee high. You are not allowed to “slouch” them so they slump around your ankles like a whore and if you do, Sister Loretta will come up to you in the hallway, look far down on you from her sisterly mountain of terror, and issue a “demerit,” which is a written notification of your trampy fashion violation.

You will also get a demerit if your skirt is too short (slut!), or if you’re somehow caught speaking with a boy in the hallway (nearly impossible since they aren’t even supposed to be on your side of the building, but still doable, I can assure you). “PDA” demerits stood for “Public Display of Affection,” and if you were busted, as I was, during recess for letting a boy try to hold your hand, you got written up. The Catholics aren’t just good at slut-shaming, they invented it and quite enjoy enforcing it.

I lived in fear of Sister Loretta during that entire school year before I ran screaming to the local public high school, having convinced my parents that the private school tuition they couldn’t afford anyway wasn’t worth it because I wasn’t being academically challenged. To this day, I’ve never pulled another pair of knee socks all the way up.