My wife is terrified of mice and simply despises squirrels. I don’t get it. 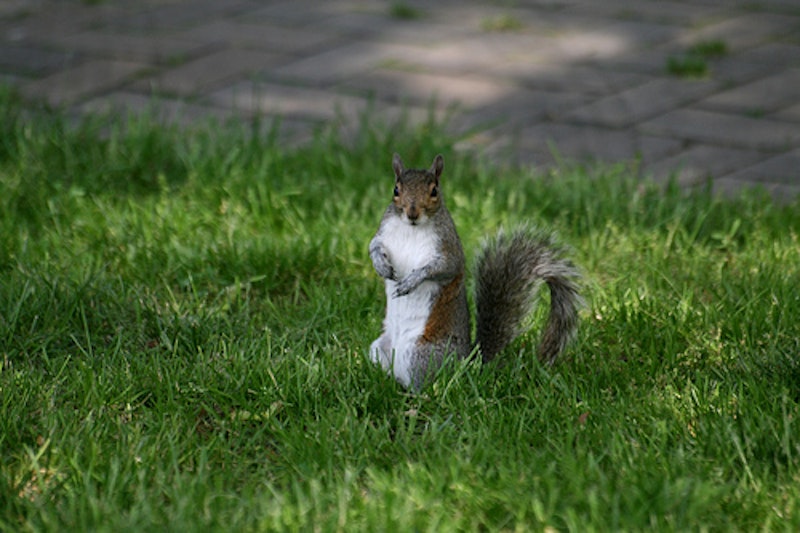 This story will, I swear, wend its way around to the case of Clarence the Squirrel, the lovable varmint who feasts upon the scraps of food enclosed in plastic bags in our garbage cans outside, but first a word about mice.

In the course of a long relationship, you collect numerous knee-slappers, sometimes apocryphal, but mostly not, usually at the expense of one another. My wife, like many women I know, has a bugaboo about mice: as a native of Los Angeles, the East Coast earthquake last August that caused grown men to soil their shorts, barely registered in her consciousness; when we lived in Manhattan, she’d drive the station wagon around the city, getting into dogfights with obstreperous cabbies on the road, often, to my chagrin, giving particularly skeezy ones the finger as a final exclamation point; and when a heavy snow blankets our driveway and sidewalk, she’s the first outside with a shovel. But a rogue mouse in the house? She gets so frightened it’s as if there’s a rabid schnauzer on the loose.

One lazy Saturday morning, in the summer of 1992, I was lounging in bed, reading The Economist (or perhaps the trashy Entertainment Weekly; sometimes my memory fails upward), when I heard an ear-splitting scream from the kitchen. As my wife was eight months pregnant with our oldest son, I was terrified, thinking something ominous had occurred and I leapt out of bed, clad just in boxers, and raced across our Tribeca loft to investigate. As it happened, she was on top of a table with a knife in her hand, frozen in fear—even ignoring the sound of Etta James coming from the radio, courtesy of the Hall of Fame deejay Felix Hernandez—and sputtered that she’d seen a mouse scampering about. Which one, I inquired, my heart no longer in my throat, Mickey or Mighty, a quip that was frowned upon for a situation of this magnitude. It took about five minutes, but I finally collared the intruder by the tail, and tossed it out the window. “Well, that was kind of mean,” she said, now relaxed, “that little devil couldn’t have possibly survived a fall of six stories.” You can’t win.

A couple of weeks ago, I was at home, consumed by the loathsome task of paying bills, when I received an email from my son at our office, saying he’d just seen a mouse near his desk. He was perturbed if not really frightened, and expected me to do something. I wrote back, “Yeah, I saw that mouse a couple of days ago. He’s called Charlie.” Nicky, the child in the womb at the time of the incident mentioned above, responded, “Charlie. It figures.” And then he explained that rodents are quite unsanitary, as if I were a toddler, and that his landlord told him that the worst thing you can do upon encountering a mouse is to become friends with the creature. I chuckled and ignored his apparent distress.

My mother, contrary to the caricature, was actually quite neutral on the subject of mice; perhaps because we lived near the woods it wasn’t a state occasion when a mouse presented itself. But she had a breaking point, which came on a spring day in 1965, when one of my brothers was responsible for two or three hours of mayhem. Doug, a high school senior at the time, filled his small bedroom with all sorts of animal life: he had several finches, a bunch of hamsters taking turns on a round-and-round wheel, a tank of fish, and, most notably, two cages of white mice, which numbered more than 100. The room smelled like a cesspool. One afternoon, both cages were somehow overturned—it’s still a mystery as to how exactly that happened, but I’ve always suspected that the still-exotic (at least in the suburbs) cannabis played a factor—and the mice scattered throughout the house.

In short order, Doug, one of my buddies and I had collared the majority of the critters, and even though a number were still at large, we decided to suspend the search party, which wasn’t the most prudent course of action. Later that night, as my mom and dad settled in their bedroom to eat Bohacks’ Neapolitan ice cream and watch re-runs of I Love Lucy, my mother went to fetch her fuzzy blue slippers and yelped when two of the mice were dozing inside of them. She snapped, and by the close of business the next day, Doug’s animal farm was dismantled, save the birds, for which my mother had an uncharacteristic affection. I thought the entire hubbub was fairly hilarious, and the real bonus was that in a week’s time the stink from Doug’s room had disappeared, although his salty mood was nearly as nettlesome.

Anyhow, starting about a month ago, we’ve encountered a garbage can problem in the back yard of our house in a leafy neighborhood of Baltimore. (One of the perks at our condo in Manhattan was not even thinking about trash: we’d take bags out the front door and simply chuck them down the garbage chute.) When we first moved here, it was raccoons that knocked over the cans and made a hash of the contents; for whatever reason, they vamoosed after about six months. But now, it’s a squirrel, grown rather chubby from his escapades, which raises the ire of my wife at least six times a day, when she peers out the window and sees Clarence (as I dubbed him), having a nosh and sometimes inviting a few friends for the feed. No nuts for these squirrels: they gorge on banana peels, half-eaten artichokes, the remains of a pot of Minestrone, cheese rinds, pickles plucked from sandwiches by my mustard & pickle averse son, Chinese noodles and pizza crusts.

Clarence is not a meek squirrel: the last straw was when he gnawed a hole through one of the plastic lids of a garbage can. The next day, my wife, with a malicious smile, spread half a bottle of hot sauce over the tops of the cans, figuring she’d make Clarence do a fire-foot jig for his supper, and then move on to a neighbor’s house. It didn’t work, and thankfully, at least from my perspective, the squirrel has become a de facto pet, although of the outside variety that you don’t pet.

Five days before Christmas my sons and I went on a road trip to Manhattan to do some shopping and catch up with one of their cousins. On the Amtrak excursion from Baltimore to New York, the three of us came up with a game plan for procuring a few gifts for my wife, and though the centerpiece was clear-cut, we did a round-robin trying to think of something that might crack her up. Just north of Wilmington, it hit me: there are plenty of taxidermy shops in Manhattan and wouldn’t it be swell if we got Mom a mounted squirrel?

My son Booker hemmed and hawed, looked up stores on his iPad and said, “Love the concept, Dad, but these prices are really high for a joke gift.” I persisted, saying I didn’t care what it cost, give or take 50 bucks, and that’s when his poker face collapsed, and he all but admitted that yours truly would find a dead but gussied up squirrel under the tree come Dec. 25. And that I did, and a splendid specimen he is! Simon now resides on my desk upstairs, just underneath the yellowed front page of The Boston Globe the day after the Red Sox broke the 86-year-old Curse of the Bambino and took the World Series from the Cards in a four-game sweep.