Merrill Markoe shows that she'd be a better talk show guest than she is an essayist. 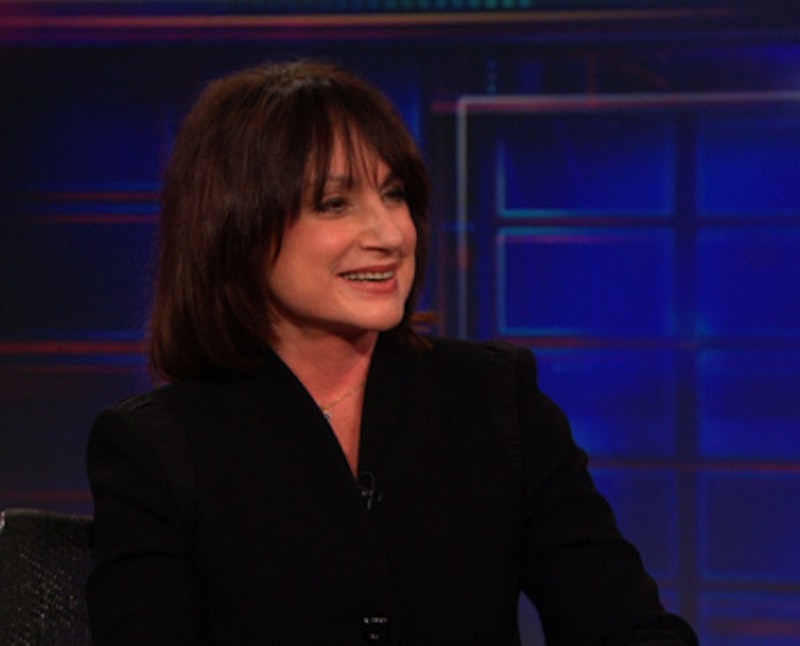 Let’s say you’re a writer, an actual writer and not an exercise specialist or diet doctor, and yet prose is not really your form—you just aren’t that good at it. Well, you might be a poet or a playwright, in which case your book would be made up of poems or plays or a mix of commencement addresses and half-hearted book reviews. But let’s say it isn’t, that it’s made up of brief essays about heartbreak and crazy families and growing up. Let’s stipulate further that you can go on television and talk about your book, and in doing so you will entertain people rather than bore them. Then, most likely, you’re a comedy writer. In this case you’re Merrill Markoe, your book is titled Cool, Calm & Contentious, and I really shouldn’t have bought it for my mother.

She didn’t mind the content, which is the usual sort of thing: foolish adolescence, dating foibles, problem parents. My mother’s parents were immense problems, so watching Markoe on Colbert reading from her mother’s diary made me think the book would be a good Christmas present. It wasn’t. My mother paged through Cool, Calm in a couple of days, but without enthusiasm. She would put it down in mid-essay and go turn on MSNBC to see what Rachel or “the stupe” (Chris Matthews) had to say. She did take an interest in “Bobby,” which she suspected correctly was about Markoe’s long-ago boyfriend David Letterman. But in general she found the book to be a fizzle. “A lot of the ideas are all right,” she told me at last, sounding a bit apologetic. “It’s just the phraseology.”

Writing good prose means hitting a series of very small targets; Markoe’s shots are always off to the side. To start with there’s the title, which would be fine for a curmudgeon’s book, the sort where a formidable customer lays down the law. But Markoe doesn’t strike that pose; she’s simply a fellow journeyer through life, offering us her observations. Or consider this: “Meanwhile, she continued to carry herself with a kind of calculated imperiousness… a Hillary Clinton–like bearing of a woman destined for literary greatness.” Hillary fits into this sentence only as a woman you don’t mess with. Otherwise, there’s no connection. She has nothing to do with literary greatness, and her bearing shows a calculated hominess and affability, not imperiousness.

Or: “Obviously, a lot of the older males had decided they preferred younger women. Their motivation needed no explanation not covered by the word ‘duh.’ There was also a less obvious second reason that these geezers sought out the youngsters.” All right, but doesn’t this second motive count as further explanation? And, if so, didn’t Markoe just tell us we didn’t need it? I spent a few seconds thinking about this, meaning I delayed moving on to the next sentence by a few seconds. Regular writing suffers when it provokes this sort of debate, but possibly the writer has a point that causes you to struggle past the inter-sentence fuzz. Funny writing is different. Generate fuzz and it chokes to death.

I have to take issue with my mother about one thing: The book’s ideas are more standard than good. For instance, there’s nothing new about saying old chaps like young stuff or that the young stuff can fall for old lines. This was the “less obvious second reason” that Markoe delivered after her windup, but John Mahoney already told Cher as much in Moonstruck, and that was 24 years ago. Or there’s Markoe on her first time: “Where, I wondered, was the emotional center in this for me? I didn’t feel anything. I didn’t have a sense of accomplishment. But mostly, I was unable to decipher what all the fuss was about.” So many women have had this same experience, and at least 2000 of them have written it up in pretty much these terms. Well, “decipher” is new. I think usually it’s “I couldn’t see what all the fuss was about.”

My Favorite Year and 30 Rock make it seem like being a comedy writer means sitting around a table and talking out your ideas. Reading Merrill Markoe confirms the suspicion. I bet she’s good at the work, because her Colbert appearance was a lot of fun. But when a book’s best feature is its talk show tour, it probably shouldn’t have been written.