Inspired by true events: young men find themselves in trouble. 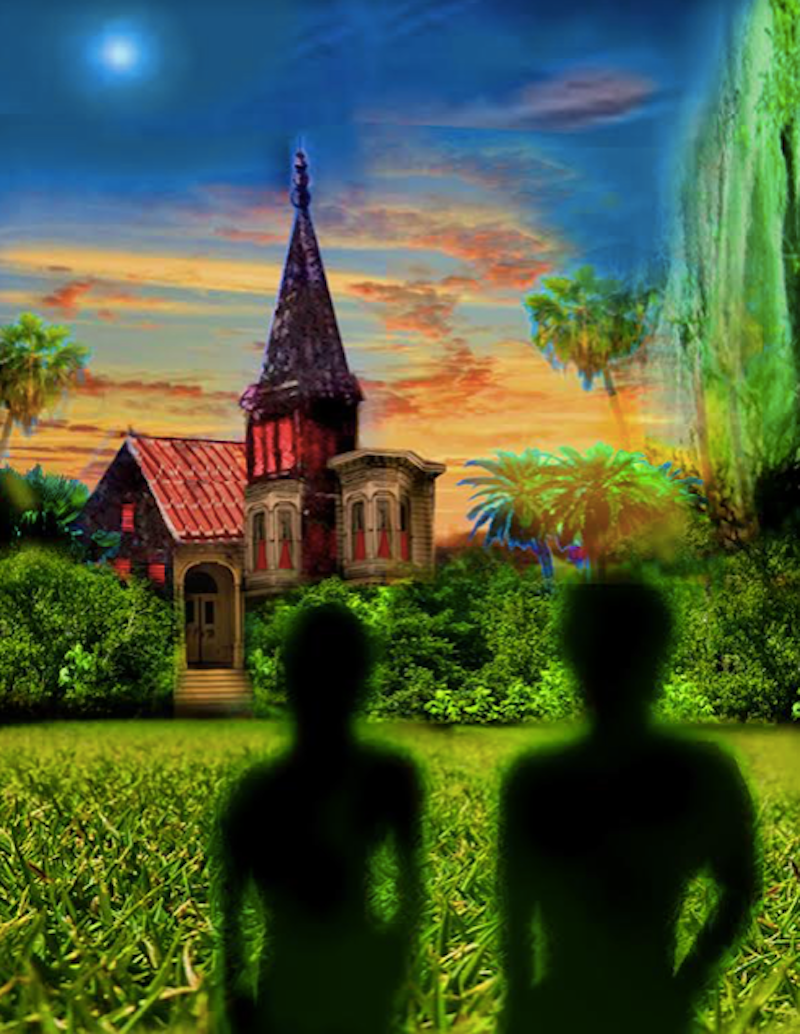 Sally Banks was having a nightmare about cooking a roast for her future spouse one early, steamy Florida morning. Outside, the trees covered in Spanish moss swayed in a gentle breeze. Lovebugs were preparing for a flurry of mating and coupling. The trailer park air conditioners were all set on high. An iguana scurried up a palm tree in the seemingly innocent setting.

In 1539, La Florida was a feral region. The full-time farmer Native-American Apalachee culture believed the sun, moon, rain and thunder were divine. Also at the time, one of the richest men in the world, the ruthless Hernando de Soto was working on his New World colonization efforts. Imagine that: conquistadors conquering, then renaming everything in their path including the tree moss (and introducing a few deadly diseases along the way.)

The pain of history hurts. Many current residents are unaware of the region’s historical background as they sit poolside with a cocktail. When President Andrew Jackson signed the Indian Removal Act in 1830, with the backing of greedy land investors, he wasn’t offering firewater. US soldiers were sent to the Anhaica territory of the indigenous people. The Trail of Tears’ violent, butchering expedition destroyed their villages and everything else they could find.

One curious artifact depicts a dancing falcon-like bird man. The carved winged figure holds a decapitated head. This stands as a symbol. Now, centuries later, if something awful happens, the thunder gods make sure it’s taken care of.

There’s not much to do here. Old-timers watch a lot of television. The retirees came because of the climate, because everyone relocates to Florida—it’s the Sunshine State. The homes have respectable carpeted grass lawns flanked by oaks, beeches, and magnolias. A dark house silhouette graces the horizon. In an ominous Victorian mansion, four teenagers, two of whom were degenerate black sheep offspring, live a nightmarish existence. The kids are part of the state’s foster care system. The Addams Family-style main house was built before electricity. It’s a state residence for mixed-up teens; the place is divided into various living arrangements.

Songbirds welcome the dawn as a front door opens. Two young men sneak outside to perform a task. Inside the house, Sally was still sleeping. The trim and attractive 16-year-old continues to suffer from distress after a terrible car accident. A few other juvenile residents: Shane, Billy, and Timmy also went to Sally’s high school. Shane was a force of nature; a reclusive, bipolar teen who had failing grades this semester. He poses a serious threat when not taking his prescribed medications; plus, he stalks and obsesses over Sally. Maybe he had one thing on his mind. When her parents died in the car wreck, the state placed her unwillingly in the home, she wanted to live with a distant relative.

At the high school, Timmy was a learner—the class’s smartest student—and committed to college. Sally the Beautiful daydreamed while perched next to a window. Every time she spotted Timmy, the classroom swam about; her manner softened, the coolness fled her face, and her blue eyes started to flutter. She suppressed her passions but frequently broke down in tears. After going through such a difficult time, she yearned for a kiss.

Shane’s older step-brother Billy came from a different marriage. The backwoods mongrel struggled with his own melancholy demons; he’s the guy who could never figure out why he landed in so much trouble. Shane recalled his late abusive parents’ parenting was the “best” parenting-at-its-worst. If by accident, the boys forgot to wash their hands before dinner, they were punished. It was depressing; locked away for extended periods in a small room with no light. The parents hated the kids. Agreeing, the Department of Children & Families services intervened. The minors have resided in the home since they were young teens.

Something else was happening in senior class; Sally frequently smiled and noted Timmy’s stare. The jealousy that lived inside Shane’s insecure sunbaked brain took note too, drawn to the attraction. Shane snapped, spit on the floor and became an instant sociopath. He recruited Billy and devised a plan to put Timmy at their mercy. The young men were oblivious as their mind-boggling reckless behavior reigned.

Timmy was a paper boy. Early weekdays, still half asleep, he parked an e-scooter curbside in the trailer park. Wrapping a rubber band around a daily newspaper was much-appreciated by the seven people around here who could still read. Unsettling news would later rock the community. Shane and Billy were ready to embark on a ritual; would it be a rock, a tree branch or a pair of two strong teen’s hands?

The boys hid behind some bushes.

At this point, a hunting knife appeared, and they grabbed Timmy. Billy’s brawny arms held him tight. A nearby falcon observed the rumpus. Several Ring doorbell videos captured the abduction. The media was given access to surveillance video which quickly went viral, available worldwide by mid-morning. Two menacing figures were captured on camera pulling a victim in the shadows. The juvenile home’s staff noticed that some of its residents had disappeared.

A week earlier, Shane scouted a location around Lake Jackson. He found a desolate, small clearing. There was a short cut. The stealthy trio traveled through an overgrown, abandoned pecan farm. Wading ankle-deep through a marsh covered in cow lily, sawgrass scratched Timmy’s legs. There were lots of wild creatures, writhing leeches and pythons hissing. A lump of fear grew in Timmy’s throat.

Facing the unknown, they stopped at an opening surrounded by palmettos and piney woods. Shane’s fists were clenched. “Going to teach you a lesson, hear me?”  Shane said. Was the birdman keeping watch as the boys tied Timmy to a cabbage palm? As they whipped him with branches, Timmy blinked. A twisty, pinwheel of dizzy memories surged through his mind—a dash of dreams, followed by the harsh reality of the present situation. Out of the corner of his eye, Timmy made eye contact with the falcon.

This wasn’t going well. Perhaps the bloodshot eyes and the swollen, clotted appearance on the predator faces were signs of yesterday’s all-day inhalant binge. Carbona cleaning fluid residue still circled their mouths. They were addicted to huffing; inhaling solvents for the numbing rush—the love of a nasty high, getting smacked in the head by a knock-out buzz after each exhale was heaven. The danger made it even more enjoyable, a pleasure to mask a painful lives’ existence.

Shane’s mouth was so dry he couldn’t talk. He fumbled around looking for matches in his cargo pants. There was a blank look in his eyes, that of someone who wants to set you on fire. The boys doused a pile of dry palm fronds with lighter fluid. Timmy’s head involuntarily jerked forward, and he fainted. A hovering sound circled above. “Cut him loose,” Shane said. Billy sliced the clothesline. Timmy ran to the nearby highway. The falcon flew away. The incident could’ve been much worse. Law enforcement retrieved Shane’s cellphone GPS and pinpointed a location using a drone. By early afternoon, both boys were in custody.

Trying to make Timmy vanish under mysterious circumstances was a criminal act of pure madness: there was no instant karma, no mystery, no nothing. After being locked up for nearly a year, Shane and Billy’s youthful wrath subsided. They regret the past. A chance of release with a parole hearing is scheduled; they wondered if Sally was content. Now Timmy and Sally’s marriage stands as a humble example of how love conquers all. However, if you ask Sally about it, she’ll tell you, “It’s personal.”