The dentist told me to press on it as hard as I could. That is what constituted an anesthetic in Yugoslavia. 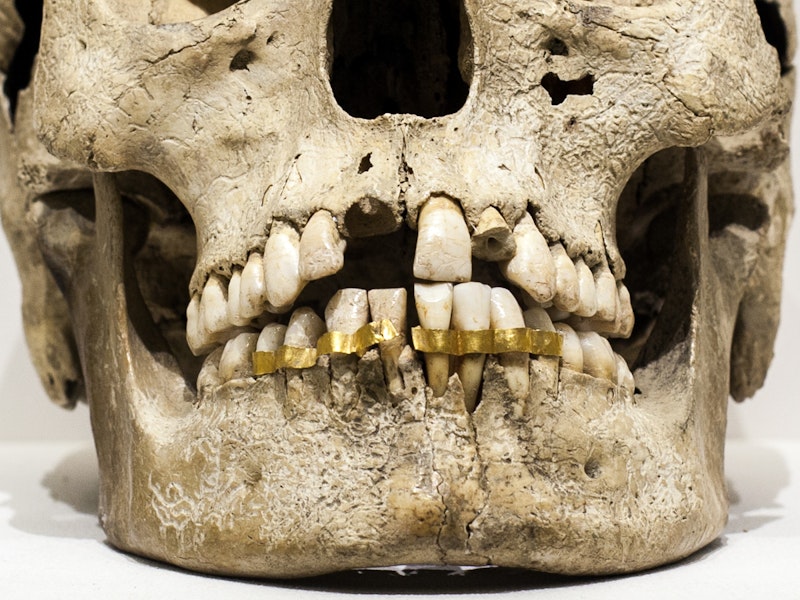 It was bound to happen. The pain in my tooth was so unbearable that I had to go see a dentist. I must’ve been 10 or 11 years old. When I was growing up in Socialist Yugoslavia, you couldn’t just go to any dentist. Rather, it was the district or part of the city you lived that determined which doctor and dentist you saw. The healthcare wasn’t the best. Socialist equality made it equal for everyone—equally mediocre or awful, depending on what services you needed.

There I was, feeling exceptionally anxious, walking with my mother toward the dental abyss. I generally had a wild imagination and that Slavic disposition that life is perpetually a tragedy full of darkness, so naturally, I was coming up with strange scenarios that involved brutal torture. My worried imagination wasn’t that far from reality.

The dentist’s office was in the basement of the building that housed orphans and blind children. Orphans were running around outside and inside the building, and blind kids held on to their canes. As I was waiting in front of the dentist’s office, a blind child walked past me, and made me dreadfully uncomfortable. I didn’t know what to do. The passing moment was slow moving (at least in my mind) and the appearance of this different child created an even more anxious feeling in the pit of my stomach. Somehow, I’d forgotten that he couldn’t see me because his mere presence was an imposition.

I held my mother’s hand tightly and the bizarre burden of seeing the blind child was interrupted by a call from the nurse. The room seemed so large to me that the echo had its own echo. Maybe it didn’t. Maybe it was small and cramped but the revisiting of the fear coupled with the irritating unreliability of memory renders a clear image of a room that was extending for miles. And in the very middle was the dentist chair.

What followed was very real. Upon the initial inspection of my tooth, the dentist tried to fix it. To ease the pain, he put some dried clove on the tooth and the surrounding area. He told me to press on it as hard as I could. That was it. That is what constituted an anesthetic. He picked at the tooth with a sharp tool but when that proved useless, his hand moved toward the drill. The smell of the clove and the generalized sterilization was blending in with the screeching sound of the drill and the gray speckles on the cold, terrazzo floor which began to move and form a variety of shapes.

Every time the drill touched my tooth, I flinched. I was suppressing the tears. Instead of focusing on the pain I was feeling in the tooth, I concentrated on a geometric symmetry of pain—my head and my toes. The sound of the drill stopped. We must be done, I thought. I’ll be okay. But I was wrong. The tooth, according to the dentist, could not be saved. It had to come out.

I didn’t have much of a choice. The dentist said those words very matter-of-factly with no sugarcoating that you might extend to a child. Who knows whether the tooth could’ve been saved; in those times and in those political spaces, getting rid of it was the most efficient way of dealing with pain.

If I thought that the drill was frightening, nothing could’ve prepared me for the pliers that casually passed by my eyes. In his infinite kindness, the dentist gave me another piece of dried clove to chew on, which had no effect whatsoever. In my mind, the back and forth movement of the pliers had no connection to the dentist’s hands at all. The pliers themselves had a being of their own and as they moved up and down, left and right, zig and zag, and tears began to stream down my face. Strangely enough, I didn’t make one sound. Instead, I turned my body into a wooden plank and hoped that I wouldn’t die.

My tears began to mix with the blood and despite the fact that the separate yet jumbled movements of the pliers were turning into an infinite reality, the ordeal finally came to an end. The pliers disappeared into the fog, rising into the high ceiling of the room, only to fall on the ground, their color melting into the gray and black speckles of the sterilized floor.

The nurse told me to spit, and I dutifully did. The saltiness of my tears was mixing in with the traces of dried clove. I desperately wanted to sleep and wouldn’t have minded staying in the dentist chair for another hour or two. Summoning power outside of myself, I got up and dragged my feet across the floor. The woodenness and immobility of my hands (almost) prevented me from opening the door and exiting the clove room. As I was leaving, I held onto my mother’s arm. I passed the orphans, and I didn’t care that the same blind boy was slowly grinning in my direction. My feet and legs were becoming stronger as I opened the heavy door of the orphanage. I made my exit as the sounds of the boy’s cane echoed throughout the barren and melancholic space.