Returning to America after the rush of life in India. 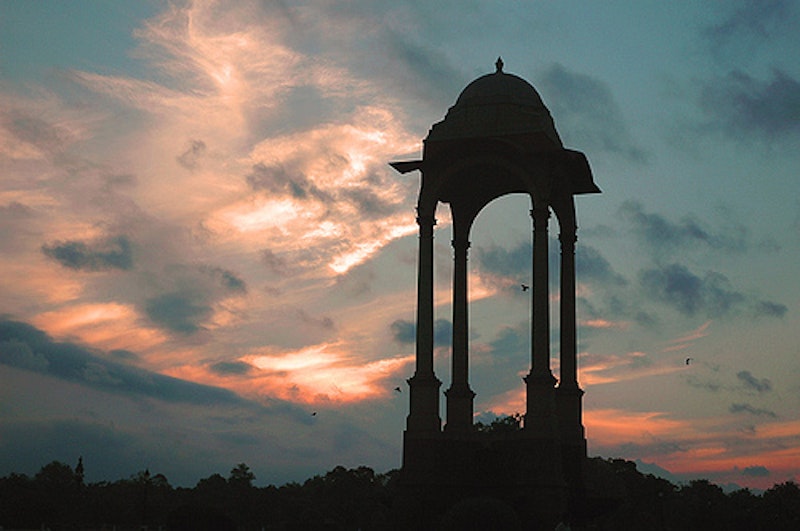 The white noise of 20 million-odd heartbeats is loud enough to disturb my sleep. I spent four restless nights in Mumbai—or Bombay, whichever name you prefer—and despite running myself into the ground during the day, I found sleeping more than three or four consecutive hours an impossible task. Now I am home. After five months of living in Delhi and three weeks of traveling throughout India, I am from my childhood home outside Baltimore. And yet my sleep is just as fitful here as it was in those A/C-frosted Mumbai nights.

Until sitting down to write this, I hadn’t allowed myself to go back to India. It’s been two weeks since my plane touched down in Newark, NJ, early on a crisp mid-March morning, after a 16-hour haul from the mania of Mumbai. Since then, I have turned off the part of me that lived in India, choosing instead to focus on my enthrallment with America and its people. It hasn’t been all that difficult.

The visual stimulation, the Technicolor dream world of India, has been replaced more easily than I expected by the rainbow-colored spectrum that is the American population. Going from India, a place rightly renowned for its diversity, to the Baltimore-Washington megalopolis is a startling example of how diverse the United States really is. Here, I do hear the Hindi and Urdu that I worried I’d miss. And it’s right alongside English, Pashto, Russian, Spanish, Arabic, Farsi and Korean. We are a colorful people—even if our clothes lack the exuberant pop of their Indian counterparts.

Life feels so much simpler here. I marvel at the freshness of the air and the absence of black soot from the inside of my nostrils. Traffic—both foot and car—is so orderly. I now have relief from the constant anxiety induced by motorbikes and auto-rickshaws buzzing past me on the street (because, of course, sidewalks are rarely usable or existent in most places). My wallet is finally in my back pocket where it belongs, and I no longer clutch to it when I enter a moderately crowded place. Everything is big, clean, and transparent. Costs are plainly labeled. Taxis are metered. I can use my credit card almost everywhere. There are no stray dogs. Even the wretched D.C. traffic seems less imposing than it used to.

But I realize that I am not yet ready to leave India fully behind. There is too much left to say and to muse upon. I find myself drifting back to the pale yellow sands of Chowpatty Beach in the center of South Mumbai. I am standing with a ball in my hand. In front of me is a boy, a few years younger than me, protecting the wicket with his cricket bat. To my right is the majestic Malabar Hill neighborhood, with skyscrapers protruding from temple-strewn green hills. To the left, more skyscrapers herald a financial district. And behind said batsman is the Arabian Sea. I can hear the calls of the chaiwallahs meandering through the beachgoers with big tin jugs full of presumably milky, over-sweetened tea.

The boy—who invited me to join a makeshift cricket game—pounds his bat in the sand, interrupting my reverie. The sun beats down overhead, but it is beginning its swift retreat into the Indian Ocean. The bright lights of Mumbai haven’t yet been switched on, but their glow is impending and the boys know it. I am about to toss the ball awkwardly—baseball and cricket skills aren’t nearly as interchangeable as I hoped they’d be. In a few short minutes, I’ll be whiffing on every soft toss coming at me. Sachin Tendulkar I ain’t. But I’m not ready to throw. I need another minute to drink it in. I close my eyes and feel the emptiness around me, the small circle of sand separating me from the batsmen and from the fielder behind me. It is maybe 10 feet in diameter, and I am alone in India.

You cannot imagine how empty and quiet my suburb feels. Just now, I looked out the windows of my house and saw not a single human being, a virtual impossibility on any given late afternoon in India. There are no vegetable salesmen pushing carts and calling out their wares, no security guards or waiting drivers, no cows, no holy men, no strangers, no women with buckets on their heads, and no schoolchildren. In the days I’ve been back, I’ve taken to long walks along the paths in the woods around my house. Usually I take my dogs, but the other day I went alone. It was the clean serenity I thought I missed so much while in India.

In the building next to my apartment in Delhi, one of the tenants would blast the same repetitive music every day from morning to night, a hypnotic mix of chanting and vibrato sitar. As such, every time I walked outside, I was instantly confronted with the rush of being in India. Much as I was always excited to see cows, I never tired of hearing that music. In India, there is just so much to process. There are so many people and animals in such a small place doing so many, often inscrutable, things, and your life becomes extraordinarily interesting even when you’re humming along in a routine.

This is the bargain you make with India. Everything happens there. Strangers invited me for tea out of the blue. I saw floating palaces, golden temples, and the world’s most famous monument to love. I once saw a monkey try to steal a plastic bag from a small child at a 1500-year old temple carved out of island caves. The exhausting frustration that riddled my existence there could always be instantly washed away by seeing something spectacular—like a painted elephant towing a cart alongside a three-lane highway in Delhi. Life roars there. The constant chatter, in dozens of different languages and dialects, mixes with the incessant car horns, cattle loaming, stray dogs barking and ubiquitous exploding firecrackers. The sound buzzes in your ears even when you can’t hear anything at all.

Then you find yourself alone, in the middle of a quiet beach. The families are a few hundred yards away, the chattering teenagers maybe 100, and the batsman maybe 10. The gridlock rages behind you, but you can’t hear it, the gentle ocean waves are much closer and clearer. You are alone in India, even if you are never really alone.