What can we do to make posterity happy? 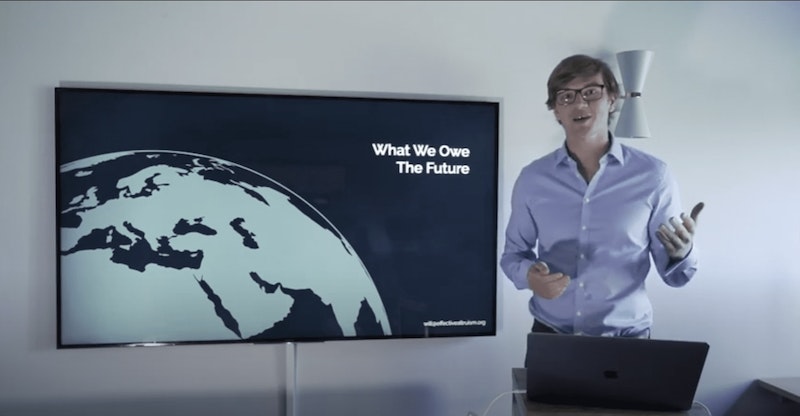 What We Owe the Future, by philosopher William MacAskill, is a new book that’s made an impression on me. I recently wrote a capsule review of it at NetGalley, a website that provides electronic advance copies of books; a hectic schedule in the run-up to a trip had convinced me I didn’t have time for any other writing just then. But thinking beyond the pressures of everyday life is precisely what this book’s about.

MacAskill promotes “longtermism,” which argues for considering—and trying to affect—the prospects and problems of humans (and other sentient beings) who may live centuries, millennia, even eons from now. In a clever thought-experiment, he discusses dropping a bottle on a remote hiking trail and allowing the glass shards to remain; if these subsequently cut a child, does that injury matter less if it happens after a century has passed rather than a week?

Moreover, he notes, posterity may include enormous numbers, vastly greater than the current population of Earth or the cumulative numbers of people who’ve yet lived. Humanity might be around for a million years (the average for a mammalian species) or far longer, and our progeny might spread off the Earth and into the rest of the solar system, galaxy and beyond. The difference between whether humanity goes extinct anytime soon or not is measured in countless lives. The quality of those lives might be wonderful, horrible or anywhere in-between.

The range of possible outcomes is astounding. Moreover, MacAskill convincingly argues, people’s actions today, individual and collective, will shape the future in substantial ways, for better or worse. He points out that prehistoric people likely hunted various species of large animals to extinction and plausibly played a key role in the disappearance of other branches of the human tree, effects that have shaped our world. People of today, with far-greater technology and information, could have far-reaching effects through many paths—by what we do or don’t do in matters including climate change, pandemics, and artificial intelligence.

What We Owe the Future gets into some esoteric philosophical territory, including a strain of thought that the world would be better off if humans (or conscious beings generally) didn’t exist; MacAskill’s discussion here includes polling data as to how happy people are and whether they’d prefer never to have been born. MacAskill takes an upbeat view on the question of whether to have kids, seeing the creation of prospectively happy people as a positive contribution to the world. His outlook puts a premium on technological innovation, while also emphasizing the importance of building safeguards into AI and other technology. Animal welfare is given priority as well, including in a harrowing discussion of factory-farming.

MacAskill tries to give some rigor to assessing different possible future states of affairs. He poses a framework that considers significance (how good or bad a situation is), persistence (how long it lasts) and contingency (whether the situation would’ve occurred anyway). He discusses, for instance, whether the end of formal slavery would’ve happened before long regardless of abolitionist efforts; he contends there’s little reason to believe so. He argues against objections to longtermism, such as that people will be wealthier in the future and can handle their own problems, a complacent stance based on dubious extrapolation.

A key worry posed by MacAskill is that there’ll be a “value lock-in,” where the flux of ideas solidifies and a particular ideology holds sway for a long period of time. He sees this as having happened at several points in China’s history, with contending schools of legalism and Confucianism taking hold during different dynasties. Among the dark possibilities for such lock-in would be a fascist movement prevailing in previously democratic societies, or an AI arising that enforces a particular social system perpetually, since the entity is effectively immortal.

What We Owe the Future is a thought-provoking book that’s likely to change some minds.