On the Federal Writers’ Project and its New York guide, the most famous, reprinted a number of times since it was first issued. 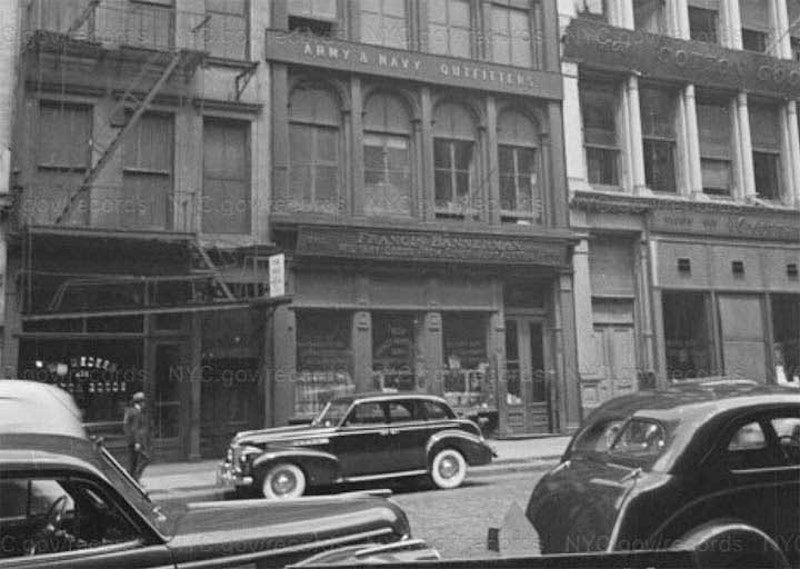 The Works Progress Administration Guide to NYC is a dense, 700-page volume with tightly-spaced type in a small but readable Garamond font, with a generous use of maps, art and photographs, describing New York City in the 1930s. The Federal Writers’ Project, during the Depression years, put a lot of unemployed writers and photographers to work producing series of books describing American locales; the New York guide is the most famous, reprinted a number of times since it was first issued.

I first encountered the book in grade school during my visits to the local library in Bay Ridge, where the first edition was on the shelves. In 1982, I obtained the Random House reissue, which featured new cover art but otherwise retained the original publication of 1939, with a new introduction by urban chronicler William “Holly” Whyte. The New Press issued it for a third time in 1995.

In late-2019, the online NYC Municipal Archives flooded thousands of tax photos from 1940 from all five boroughs onto the World Wide Web. Most were hurriedly done and not artistic in scope; just for tax identification purposes. The photographers didn’t turn in Ansel Adams-level quality—they just got the job done as quickly as they could.

Since both the Archives 1940 tax photos and the WPA Guide are in the same era, I decided to take some of the more esoteric references in the Guide and match them up with what I could find from the Municipal Archives. Above, there’s the RKO 23rd Street Theatre, already old in 1939 and on its second life. The theater, on the northwest corner of W. 23rd St. and 8th Ave., went back to 1868, when Cincinnati entrepreneur Samuel Pike built an opera house and named it for himself. After financier Jay Gould obtained it, it was renamed the Grand Opera House. In 1938, RKO took over the building and hired Thomas Lamb Associates to convert it to a movie theater, renovating it completely to what’s seen above. The theater soldiered on until 1960, when it burned down. The space is now occupied by a low-rise building home to the Dallas barbecue restaurant. 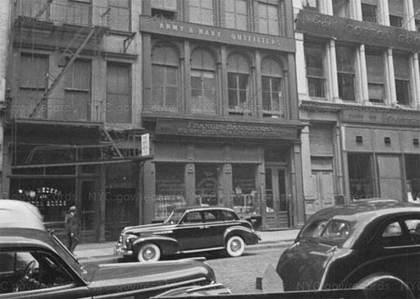 Bannerman’s Museum is mentioned in the book at 501 Broadway. It’s part of Francis Bannerman and Sons’ firearms firm, founded in 1865 by a former Civil War naval officer. The museum featured exhibits tracing the history of modern weaponry and at the time (1939) included a flag belonging to General “Lighthorse” Harry Lee; a flintlock that belonged to Napoleon I; and a guidon, or forked pennant, of the 7th US Cavalry in the Battle of Little Big Horn, which didn’t turn out well for General George Armstrong Custer. 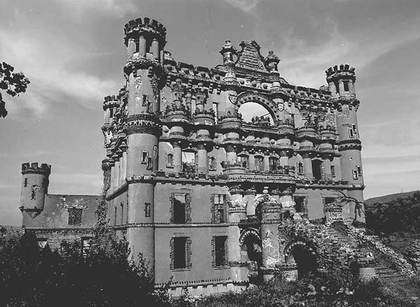 Though the Bannerman Museum is long-gone, a rococo armory Francis Bannerman built on Pollopel Island upstate on the Hudson River still exists in ruined form, and has been a destination for generations of urban explorers. 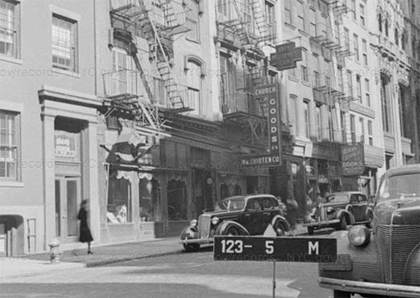 NYC formerly had a large number of “fiefdoms” or concentrations of businesses all offering the same services or selling the same things. Some, like the large Garment wholesaling district, are still around, while others, like the Meatpacking District, have shrunk. In the 1930s on Barclay St. between Church and Washington Sts. there was a concentration of “ecclesiastical supply stores,” selling vestments, chalices, missals, and the like. It likely sprung up in association with St. Peter’s Church, one of the oldest Catholic parishes in NYC, established in 1786 with the present church building dedicated in 1838. Nearby were the downtown Washington Retail Produce Market and the “butter and egg district” along Duane St., dealing in dairy products but also nuts; the recently shuttered Bazzini importing business was a part of that scene. Only St. Peter’s now bears witness to the old “Ecclesiastic District.” 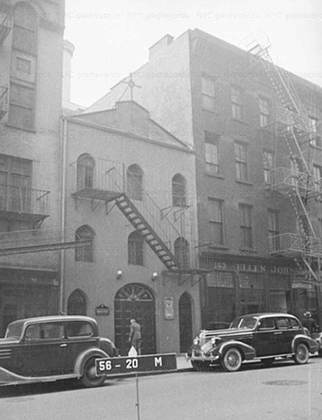 Constructed around 1820 as a private dwelling, this Greek Orthodox church stood in the shadows of the World Trade Twin Towers at #155 Cedar St. until  2001 when the building collapsed during the terrorist attack on 9/11. Greek immigrants established St. Nicholas in the building in 1916. For many years, the church sponsored the “Rescue of the Cross” ceremony on January 6, when a small wooden cross was thrown into the freezing Hudson River to be rescued by some youthful parishioners. The ceremony was later amended so the cross could be pulled to safety using a white ribbon.

Cost overruns and fiscal chicanery have the project to build a new St. Nicholas on the new WTC plaza in abeyance; an incomplete building stands as the project got started, but never completed. 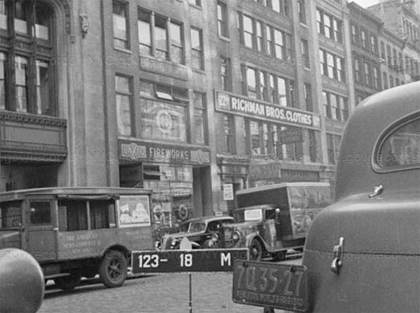 In the 1930s, there was a concentration of retail and wholesale fireworks businesses along Park Pl. east of Church and along Church between Barclay and Murray. Then as now, legal fireworks were big business at carnivals, circuses and celebrations, especially around July 4. These shops first arrived in the 1880s, as “works” were shipped across the Hudson from New Jersey factories. In this photo, note the newspaper delivery truck, and on the right, the World’s Fair license plate; the Fair was held in Flushing Meadows in 1939-40 and again 25 years later, in 1964-65. 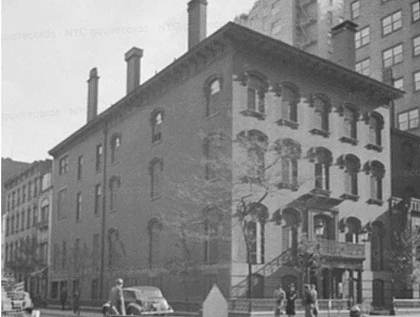 Peter Cooper (1791-1883) was the industrialist-inventor whose conceptions resulted in the transatlantic cable, the steam railroad engine, and Jell-O. Cooper established Cooper Union, the architecture, art, and engineering school still going strong in Cooper Square, Manhattan. He’s buried in Green-Wood Cemetery; the site of one of his glue factories used to make gelatin on Maspeth Ave. in Williamsburg is now a park.

#9 Lexington Avenue, at the southeast corner of E. 22nd, was Cooper’s home for a time in the late-1800s. The entrance had two lamps at the doorway, a distinction usually reserved for NYC mayors: Cooper’s son-in-law, Abram S. Hewitt, was NYC mayor from 1887-1888. Cooper’s descendants lived in the building until 1938. The space is now occupied by the Park Gramercy, a high rise apartment building. 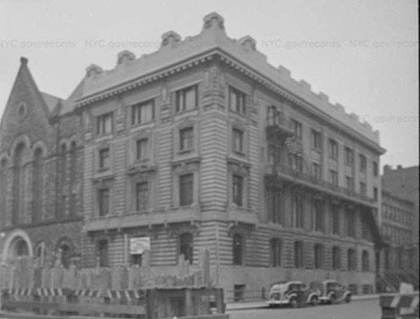 Both of NYC’s strongholds for Finnish immigrants have just about disappeared. Finns joined other Scandinavian immigrants in Brooklyn in the early-20th century, because of then-plentiful jobs on the docks on Brooklyn’s East River front, as so many imported goods were shipped in and out from there; the work has largely moved to area container ports, and Brooklyn (and Manhattan’s) shipping has largely gone away. While Danes and Norwegians gathered in Bay Ridge and Sunset Park, Finns lived in northern Sunset Park, north of the park itself on the side streets between 7th and 8th Aves. A couple of traces of that era remain. The cooperative apartment building was conceived there, and some of the buildings are still in place; above one doorway is inscribed the Finnish phrase alku toinen (Beginning II); alku I was in stenciled goldleaf on an adjoining building, but it has since disappeared. A second Finnish neighborhood existed in Harlem in the early-20th century, concentrated on streets between 5th and Lenox (now Malcolm X Blvd.) in the upper W. 120s.

Seen here, Fifth Avenue Hall, 2056 5th Avenue at W. 127th, is now cooperative apartments, but with no trace remaining of its Finnish legacy.