Scenes of the Grymes

Vistas are precious and few, though; much of these hills are occupied by private estates. 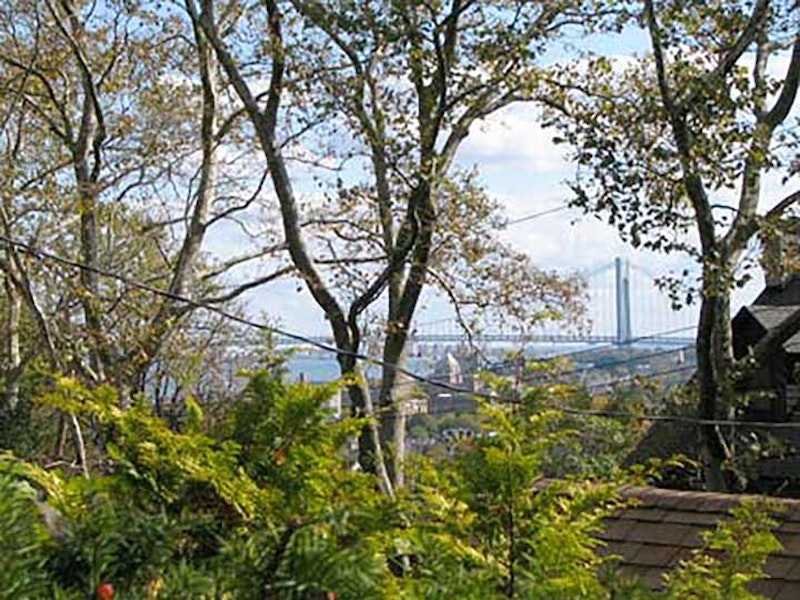 Grymes Hill is easily glimpsed from the Stapleton Staten Island Railway station, looming over Staten Island’s north shore communities. Grymes, along with Wards, Emerson, Todt, and other mid-island hills, are the legacy of a glacier that reached its southernmost limit and provide New York City with its only mountainous areas: the hills are the highest on the east coast south of Maine, and from their summits the towers of Manhattan and the Watchung Mountains in Northwest New Jersey can be glimpsed. Vistas are precious and few, though; much of these hills are occupied by private estates. Grymes Hill itself is named for the widow of the first governor of Louisiana, Suzette Grymes, whose mansion, Capo di Monte, was one of the first in the area: it was built by Major George Howard between 1830 and 1836. The region was home to prominent families: shipping scion Edward Cunard’s mansion is now a part of the Wagner College campus and has a magnificent view of Manhattan visible from Howard Ave., as well as of the Verrazzano Bridge. St. John’s University is also represented here with a campus on Howard (formerly called Serpentine Rd., not for its snaking route but for the native rock). 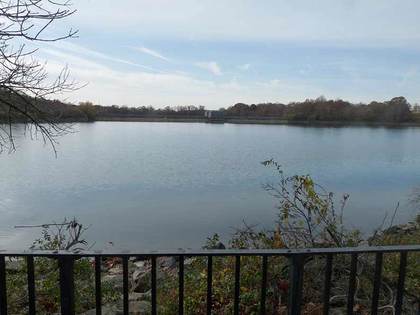 Glaciers also formed the original Silver Lake, converted into the southern end of New York’s Catskill water supply system as a reservoir in 1913, filling this function until 1971. The reservoir today is part of the drainage system for underground storage tanks. 209-acre Silver Lake Park, stretching between Victory Blvd., Forest Ave. and Lakewood Rd., exists due to the efforts of Staten Island writer John DeMorgan, who pressed the State Assembly Committee on Cities to appropriate funds to establish Silver Lake Park in February 1900. The park started acquiring its current appearance in the four years following, making it Staten Island’s oldest large park. When land from the old Marine Cemetery was added in 1924 and converted to a golf course in 1929, it was later discovered that many Irish immigrants may have been buried here with the 18th hole built over their remains. 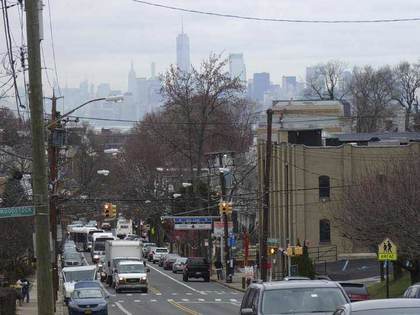 From Victory Blvd. at about Louis St., midtown Manhattan seems to float on air directly in front of you. Walk up Louis St. and, from its intersection at Sunrise Terrace there’s another priceless view as Manhattan looms before your eyes. Homeowners here have this view all the time, and it’s even better on clearer days than this. 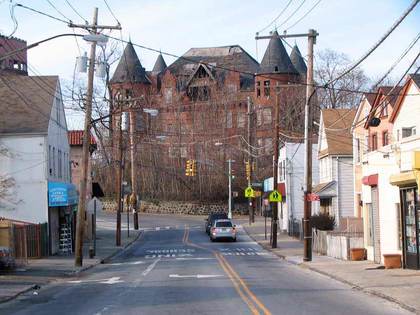 There it stood on 101 Castleton Ave. at Cebra Ave., a forbidding brick building with its four conical towers, the most castle-like building in the former Staten Island town of Castleton.

The Samuel R. Smith Infirmary (a.k.a. The Frost Building), was built on Castleton Ave. in 1889 by architect Alfred Barlow; it has housed Staten Island Hospital and a training school for nurses during its long history. Herman Melville's sister-in-law (her husband was director of Snug Harbor in the 1890s) was a secretary here. The hospital moved out in 1979; for a time the building was marketed as condominiums, but the building was left to the ravages of the elements for over three decades.

This view looking north on Cebra Ave. in Stapleton, Staten Island was no longer available as of late 2011 as the Samuel R. Smith Infirmary, formerly Staten Island Hospital, was razed after over 30 years of abandonment. 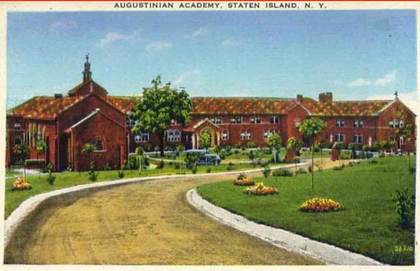 Little did I know when attending a religious getaway with my senior high school class in November 1974 at the Augustinian Retreat House, 144 Campus Rd. just east of Howard Ave. near Wagner College, that a couple of decades later the building, now in ruins, would become a mecca for urban explorers and the subject of dozens of ghost stories. The ravaged building, now hidden under a thick canopy of weeds, ailanthus and ivy, was the home of the Augustinian Academy, a Roman Catholic institution incorporated in 1870. The Society purchased this property from Erickson N. Nichols in 1922 and built a prep school here; classes were held until 1969, when it was converted to a retreat house. The Augustinians sold the property in 1985, and it has passed through many hands since, with Wagner College now owning the property. Nothing has been done to it by human hands for over 20 years.

I wandered onto Campus Rd. in the mid-1990s, out of curiosity, and was shocked to witness what a state into which it had fallen. Online urban explorers tell tall tales of murders happening here, ghosts haunting the halls, and levels and sublevels too deep to venture into; I see a building where I witnessed prayer, laughter and tears, left for the elements to tear it apart. The Academy’s Celtic cross-shaped fountain and bell tower were still discernible.

Today? Just trees. But listen hard and you may hear church bells. 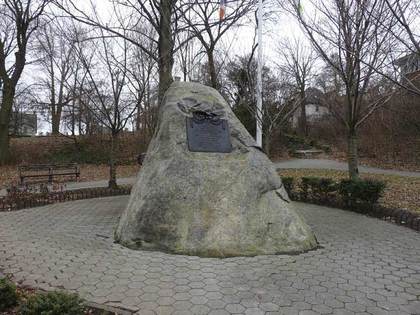 On steep Louis St. where it meets Howard Ave. is Hero Park, opened in 1920 and dedicated to 144 Staten Island soldiers who perished in World War I. The small, picturesque park is on land donated by Dr. Louis Dreyfus, a wealthy chewing gum manufacturer. His wife, Berta, donated hundreds of thousands of dollars to Staten Island hospitals as well as the Boy and Girl Scouts.

In the middle of the park is a large, irregularly-shaped granite boulder. The rock, according to a sign removed decades ago, had been known as Sugarloaf Rock; tablets placed on the rock once identified the 144 heroes, but was lost to vandalism for several decades. The NYC Parks Department removed them rather than continue to combat the miscreants. The plaques were finally restored in the 2010s.