Merlin and the Giant Inflatable Ball

You can’t stay in the saddle if it’s not underneath you. 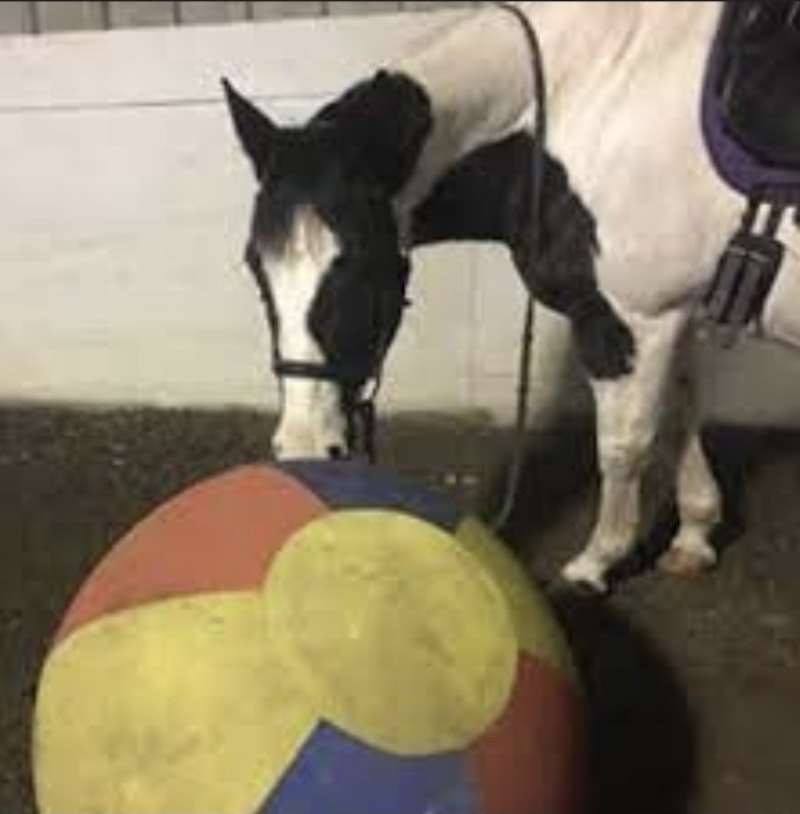 “And so I returned,” wrote the author of Ecclesiastes 9:11. My return came after recovering from a sprained left wrist and right shoulder, which stemmed from a fall from my lesson horse, Merlin. We were working well together at the trot when the saddle slipped. You can’t stay in the saddle if it’s not underneath you. So, as the English say, I went out the side door.

The first teaching of Dorothy Crosby, my riding instructor, is always ride safely. Until I could raise my right arm above my shoulder, I couldn’t properly groom Merlin, and if I couldn’t do even that, riding him would be foolhardy. Earlier this year, I wrote that the fall stemmed from an equipment failure. My memory misled me. The statement was incorrect. Southmowing Stables’ tack is well-maintained because riding safely too is its prime directive.

I’ve described Merlin as a beer keg with four legs. It’s not much of an exaggeration. As he’s very round, his girth slipped around his torso and so the ground came up to meet me.

Yet I returned, recovered Merlin from his paddock, secured him in the crossties, and began grooming him. As I bent forward to currycomb his chest, I felt him leaning down. I had on my helmet, so wasn’t concerned. Two huge lips kissed the top of my right ear. Then he straightened up. His gesture touched me, for our relationship hasn’t been easy.

A new item, a hunting breast plate, had been added to his tack. It’s difficult to describe though easily grasped when observed: the Y shaped straps across a horse’s chest. That’s a yoke (with a neck and wither strap), a breast strap at the bottom of the yoke which runs between the horse's front legs and attaches to the girth, and two straps at the top of the yoke which attach to the saddle’s D-rings, literally D-shaped rings for securing the breast plate. It keeps the saddle from sliding.

During my recovery, Merlin gained a paddock mate, Dylan. If nothing else, Dylan’s presence disproved my former belief that Merlin isn’t a social animal. Dylan’s a Canadian horse, a distinct breed descended from some 50 horses shipped to Canada from 1665 to 1670 by Louis XIV. Dylan’s a strong, well-muscled bay gelding. He has at least one eccentricity, which supports the assertion of Jackie Treehorn, the smooth-spoken pornographer played by Ben Gazzara in The Big Lebowski: “People forget that the brain is the biggest erogenous zone.”

As a gelding, Dylan was long ago deprived of certain essential equipment. Nonetheless, he’s strongly drawn to the mares when they’re in estrus, that benign yet annoying regular occurrence in the life of the adult equine female.

As one rider told me, “He gets a little silly around them then.”Hence Dylan came to share a closed paddock with Merlin.

I formerly brought Merlin a large bag of baby carrots to reward him after a lesson. When Dylan saw me giving Merlin a bowlful of baby carrots, he demonstrated a talent for standing perhaps 15 feet behind Merlin, who was loudly ingesting the carrots, and assuming the saddest face I’ve seen on a horse. Late one afternoon, I palmed two from the bag for Dylan before pouring the rest for Merlin.

I’d underestimated Merlin’s perception and misunderstood the intensity of his passion for his food. For Merlin, the possessive pronoun means every edible thing that he sees. I’d taken three steps toward the Canadian when I heard Merlin’s right front hoof hitting his bowl, which sailed past my head, scattering carrots in all directions. He stomped past me, expressing his sense of betrayal, and headed for a far corner.

I felt, as the late Sen. Robert Love Taylor of Tennessee observed when confronted by an angry mob with torches and pitchforks, that this was a moment better served by absence of body than presence of mind. I swiftly walked to the gate and carefully locked it behind me.

When I described the incident to Dorothy, my instructor, she justly rebuked me, pointing out that I was giving Merlin a sugar high by feeding him so many baby carrots. Thereafter, I gave him a single large carrot instead of a large bag. He seemed satisfied.

One Saturday afternoon, I rode Merlin in games at the stable. One game involved persuading the horses to move a very large inflatable ball, perhaps about three feet, six inches across, through goal posts.

Merlin was uninterested. I knew he wasn’t scared of the ball. Perhaps he was bored or simply tired. When I asked him to advance toward the ball, he did, slowly. He didn’t so much kick the ball as bump into it. It rolled toward our team’s goal and we followed. A rider from the other team dashed in. Her mare intercepted the ball and enthusiastically belted it with her muzzle toward her team’s goal. Merlin and I pursued, though I could only persuade him to a fast walk.

Then he staggered several times. Dr. Samuel Johnson once quipped, “Depend upon it, Sir, when a man knows he is to be hanged in a fortnight, it concentrates his mind wonderfully.” The same is true of being astride 1800 pounds of a suddenly startled horse.

I only learned later that a mare, who dislikes Merlin, had seen her opportunity and kicked him in the hindquarters. A horse in the wild fears nothing so much as a predator’s surprise attack from behind. Merlin violently turned his head and neck to the right to see his assailant. This incidentally pulled the reins from my left hand. Being temporarily unemployed, that hand immediately seized Merlin’s mane. This inflicted no pain on him and helped me keep my balance. He staggered a few more times.

The incident takes longer to describe than to experience. I had no time to be afraid. I knew my horse. I had faith in him. He kept his footing and me in the saddle. Time to get us out of there. I focused on a far corner of the arena, shifted my weight to signal a turn, momentarily pressed my left leg into his side to reinforce the signal, and booted him once to keep him focused. He’s well-trained: he knew I was asking him to trot in a particular direction toward a particular goal. I believe this refocused his mind from fear and discomfort to the task at hand. We moved through the other horses and away from the action at a fast walk. We reached the corner. I inhaled to relax, exhaled, and asked him to stop. He did. I released his mane and pulled the reins back into my left hand. Then I stroked his neck and thanked him. Horses understand tone and emotion, even if they don’t understand spoken language. I hope he knew I was grateful.

We then walked down the side of the arena to the end, stopping well behind the action. I sensed Merlin had had enough adventure for one day. I dismounted. We left the arena and together walked back to the barn. I groomed and returned him to his paddock.

A century ago, a reporter also quoted Ecclesiastes in his sports column: “’I returned, and saw under the sun, that the race is not to the swift, nor the battle to the strong,’—but that’s the way to bet.” Thus wrote the prophet Damon Runyon, whose works, like those of Ecclesiastes, bear much study.