Bombs Away: Confessions of an Open Mic Comic

When keeping it woke goes wrong. 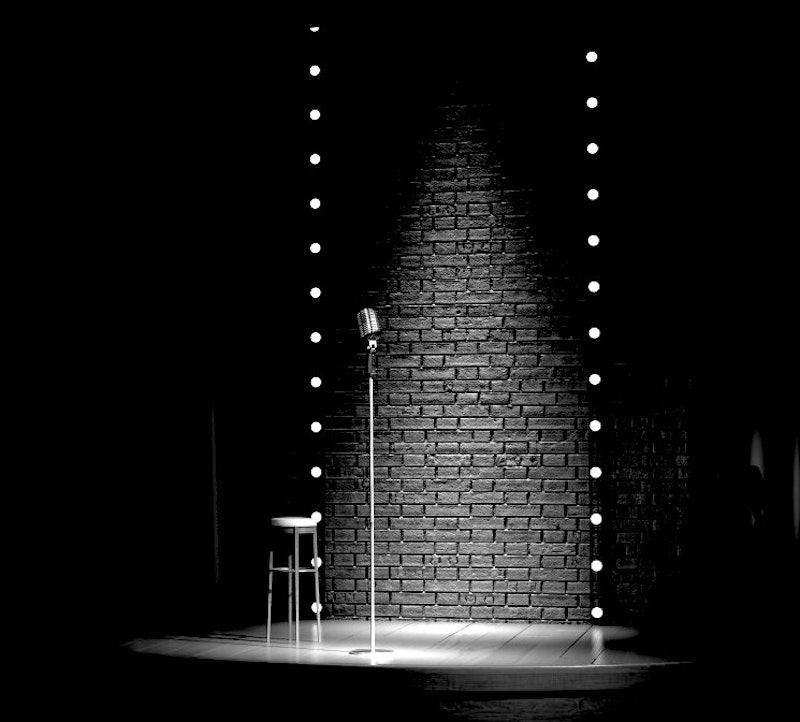 The last couple of years were dispiriting for standup comedians, whose contentment, if not livelihood, demands public speaking in small indoor venues, the quickest recipe for the spread of Covid this side of the kissing booth. As other comedians surely insist of their own progress prior to the pandemic, it felt like I was just hitting my stride when the bars suddenly closed in 2020, and the time since has been as much a series of fits and starts as the decade of open mics that preceded it. I’ve bided my time playing the role of serious writer, like a character in a Robert Bresson film, a man in a room with a notepad and a glass of whiskey. But unlike, say, the diaries of Bresson’s country priest, my notepad is devoid of any meaningful insights or spiritual meditation; its pages are instead filled with scribbled non sequiturs, allusions to half-remembered jokes, and the rare full sentence that typically reads something like, “Do fat gay guys tittyfuck each other?”

The French poet Anatole France wrote, “All writers of confessions, from Augustine on down, have always remained a little in love with their sins.” This is true of standup comedians too. The diarist commits the sin of self-indulgence but at least has the dignity to leave it on the page, while the standup demands a captive audience without the least bit of shame or self-awareness. I say this not as a condemnation, but as an endorsement of self-indulgence and shamelessness, of treating one’s thoughts and ideas, however fleeting, idiotic or offensive, as if they’re important and worthy of an audience, even when they’re clearly not.

This endorsement is at direct odds with my Catholic upbringing, in which indulgence and shame are inextricably linked. (To borrow from Saint Augustine, I am “ashamed not to be shameless.”) Though I’ve abandoned all pretense as a serious diarist, and at the risk of committing a sin even more profound than self-indulgence (e.g., not being funny), I offer these, my confessions.

I go see my buddy Ivan Martin over at Motor House. I’ve been going to Motor House since long before it was Motor House. For a while it was called Load of Fun, I think, but before that it was just a warehouse space where sometimes people would put on shows. I saw Jonathan Coward (aka Shams) light a dead bird on fire there at one of the Whartscapes. Now it’s a nicely polished bar and artist space with a separate showroom, a long way from charred animal carcasses on an old brick floor.

That’s where the mic is, and where I met Ivan a few years back. It was during another Wednesday night mic, one of the first I ever attended there. I was sitting in the back, waiting to go on, and there was a drunk guy up front causing a scene. He was what I refer to as a wokeler, someone who heckles comedians with a self-righteous bent. “Do you support the patriarchy?” he yelled at one of the comedians, a weird question in almost any context but especially at a comedy open mic. I wrote him off at first as a dude who just started dating a feminist and was a little too vocal about all the neat new stuff he was learning, but when Ivan and the other comedians there tried to kick him out, he got physically hostile in a way that demanded more people get involved. Chairs and tables knocked over, the wokeler found himself physically locked in the arms of a very large comedian who didn’t seem entirely humorous at that particular moment. He somehow shook himself free, still screaming and refusing to leave.

I got up and walked closer, kindly asking him to leave the showroom so we could continue the mic. I believe his response was something along the lines of “Who the fuck are you?” I noticed he looked familiar, like someone I’d seen before at some point, but I couldn’t place it. After my set, the wokeler was long gone. I went outside, and Ivan thanked me for helping out. We got to talking about the guy, and apparently this wasn’t his first time wokeling at Motor House. He’d shown up at an open mic before that, sitting in the front row with a woman who happened to have a black eye. The sight inspired a few impromptu jokes that I’m sure were in very good taste, and thus, a wokeler was born.

I thought about it more, and later that night, it clicked: I had seen his photo while perusing the local sex offender registry. I went to the registry and there he was, the wokeler, convicted of possession of child pornography and crossing state lines for purposes of sex with a minor. The next morning, I friended Ivan on Instagram and sent him a screencap, captioned: “I knew I knew this dude from somewhere!” I have no issues with men identifying as feminists or any other kind of ally, but it’s interesting that men who are most outspoken about these matters tend to have the ugliest skeletons in their closets. To paraphrase a certain blue-collar comedian, if you’re talking about the patriarchy but have a girlfriend with a black eye, you might be a sex offender!

I continue up Charles St., by myself now, as I often do after bombing at the Motor House. I pass the sex workers, who no longer shout Hey baby! the way they did when I was 25 and had a full head of hair. A guy asks me for money, and I tell him I don’t have any on me. I walk past the big temple-like church at 29th and Charles Sts., St. Philip and James Catholic Church. Not sure why they have to share a church. The doors are closed, but sometimes when they’re open I like to stop in and get a big whiff of that old church smell.

When I get home, Caitlin asks how it went. I smile and give my normal answer: “Demoralizing.”