Themes of sex, love, hatred, and old age define the range of established plots that might emerge. 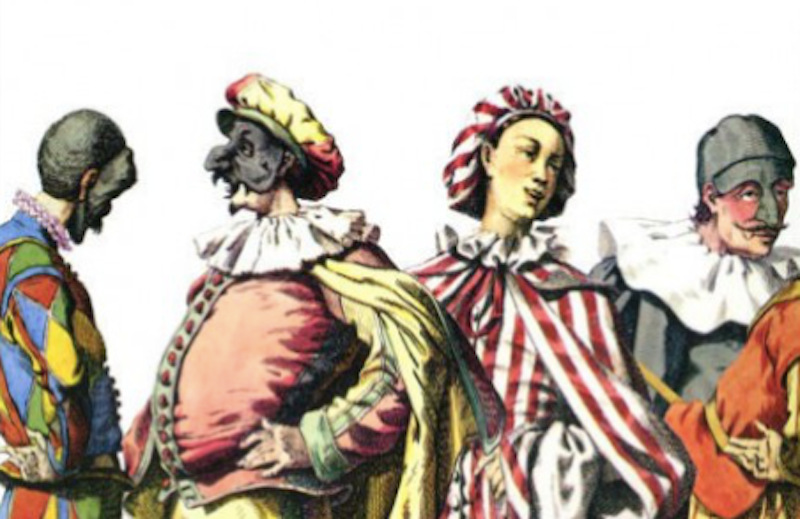 Commedia dell'arte is fascinating. Partly improvisational, partly scripted, it relies on well-known cultural stereotypes, recognizable costumes, and stock characters as well as the willingness of the audience to greatly suspend disbelief, as pantomime and street-style theater-of-opportunity make use of whatever and whoever is at hand.

Themes of sex, love, hatred, and old age define the range of established plots that might emerge; though, they usually have some resonance with current events. And the most interesting part is often how the various character types—servants, puffed-up authority figures, aged aristocrats, or young lovers—behave relative to the loosely-scripted dramatic problem.

While the roots of commedia dell'arte reach back to classical antiquity, its modern performances can be as vibrant and engrossing as any other sort of drama. And once you’ve experienced it with a talented company, it’s something you won’t soon forget. In fact, it may change the way you see all theater, including the political variety. You may start to recognize commedia dell'arte situations everywhere, particularly in moments of dramatic social upheaval. We might be able to see one emerging now in the reaction to Roe v. Wade being overturned.

There are the usual stock characters. One thinks of Justice Alito as a solid “Pantalone,” a type of Venetian aristocrat. High-status and of great influence, he suffers from his position of importance, playing, by turns, the vicious pantaloon and the shrewd man of the world. He’s simultaneously an object of contempt and a central mover in every situation.

“Roe was egregiously wrong from the start,” he writes. “Its reasoning was exceptionally weak, and the decision has had damaging consequences. And far from bringing about a national settlement of the abortion issue, Roe and Casey have enflamed debate and deepened division." Few would claim that the debate hasn’t been enflamed. And yet the tone-deaf cultural insensitivity radiating from Alito’s opinion has also enflamed and divided the nation since the draft was leaked.

Although we understand that the Supreme Court often delivers its opinions with a certain high-handedness and finality —it is the Supreme Court, the ultimate legal authority—the country is extremely stressed out at the moment. In the usual murmuration of President Biden, Americans are “really, really down.” As of June 12, the country had seen only one day without a mass shooting. And crime rates are significantly up.

Feeling this, the audience in this street drama wants to see the authority of Pantalone brought down, humiliated, and humbled with all the culturally inherited, dramatic inevitably and comedic pacing they’ve absorbed from superhero movies and bad Chevy Chase films. Since Pantalone Alito has fallen into a comedy trope that made its way from theater onto the screen, he’s now on par with Judge Smails in Caddyshack, Principal Rooney in Ferris Bueller’s Day Off, and Animal House’s Dean Wormer. He’s hated with a certain theatrical contempt by an already enraged population. No wonder people are posting his home address online. No wonder pregnancy centers have been firebombed. Women feel wronged by the highest court in the country and by the Pantalone who wrote its majority opinion.

The nation is in no mood to be compliant. Militant social justice groups and celebrities are calling for outright violence in a “Summer of Rage.” Media executives like Heather Antos, senior editor at IDW have tweeted “Burn it all down” and “Snip snip motherfuckers.” Cher has accused the justices of being complicit in the deaths of “hundreds of thousands of American women.” And Lori Lightfoot has issued a “call to arms.” But what all this will accomplish, besides generating more unrest and possibly loss of life, is unclear.

People want the same catharsis they enjoyed on January 6, 2021, at the Capitol or in June of the previous year when cities across the country were put to the torch. The themes of sex, love, hatred, and old age have come together all at once. The “Columbinas,” and “Il Capitanos” gathering in New York, Washington, Chicago, and Los Angeles have already been met by comparable counter-protesters, Zanniin service to various ideologies and groups. And the most heartbreaking aspect is that, beneath the strife and the spite, there’s genuine concern on all sides for the sanctity of human life. But this is a sad comedy where nobody laughs.

As Justice Kavanaugh wrote in his concurring opinion (incidentally, with a little more sensitivity than Pantalone Alito), “Abortion is a profoundly difficult and contentious issue because it presents an irreconcilable conflict between the interests of a pregnant woman who seeks an abortion and the interests in protecting fetal life. The interests on both sides of the abortion issue are extraordinarily weighty.” But Kavanaugh narrowly delineates the Court’s task: “The issue before this Court… is not the policy or morality of abortion. The issue before this Court is what the Constitution says about abortion.” And he concludes, “On the question of abortion, the Constitution is therefore neither pro-life nor pro-choice. The Constitution is neutral and leaves the issue for the people and their elected representatives to resolve through the democratic process in the States or Congress.”

As “Tartaglia,” the “stutterer,” he’s a conciliatory figure, often portrayed as a statesman or a lawyer, a kind of Polonius acting as an agent for other, darker powers, issuing statements which seem wise on the surface but are inevitably valueless. He’s Don Altobello in The Godfather: Part III, who spouts platitudes like “The richest man is the one with the most powerful friends” or, in Kavanaugh’s case, “The interests on both sides of the abortion issue are extraordinarily weighty.” One expects the next sentence to be “This above all: to thine own self be true.”

Moreover, as all the character types in commedia dell'arte reflect and refract each other in some way (not unlike the nine justices on the Court), we may feel inclined to see Tartaglia Kavanaugh as a kind of poor man’s Pantalone. He’d be Don Corelone if he only had the gravity and status of a Cesare Borgia. Instead, he’s Altobello, a minor Machiavelli.

It seems you can’t have such a performance without at least a few tragic lovers, the “Innamorati” and here we have, at least by Cher’s estimation, “hundreds of thousands,” many of whom, in clear homage to Aristophanes’ Lysistrata, have declared a “sex strike, withholding all relations with men until Roe is ostensibly reinstated. If this could only be sustained, it would no doubt solve the question one way or another; though, abstinence movements haven’t historically had great success in the United States. Perhaps in Aristophanes’ Greece, it could’ve been done.

Last, there’s the lonely “Pierrot,” hopelessly in love with a “Columbina,” a pretty maid. And who could this be but Justice Thomas, who inveighs at length about the oxymoronic qualities of “substantive due process” that “lacks any basis in the Constitution”? In his view, “because the Due Process Clause does not secure any substantive rights, it does not secure a right to abortion.” And that seems directly in line with Thomas’ approach to Roe since 1991.

It suggests his true love is the Court itself, which is the ultimate Columbina in this drama. He writes, “Because any substantive due process decision is ‘demonstrably erroneous,’ we have a duty to 'correct the error' established in those precedents.” As the weather vane and perpetual suitor of the Supreme Court, Thomas always indicates the direction of the Court’s thinking. And like the classic Pierrot, he’ll pursue that line, correcting ostensible errors and chasing his Columbina to the end.

These are not unprecedented times. Our political moment abounds with precedents, legal as well as theatrical. And we have to struggle with how to understand them. If the comparison to commedia dell'arte seems absurd, perhaps it is. But only irony and farce, only an unfunny joke, can describe the upheaval, unrest, and misery that has been and will be caused by this unfortunate comedy. Now that we’ve seen it, it’s something we won’t soon forget.