Some things in life are worth dying for I guess. 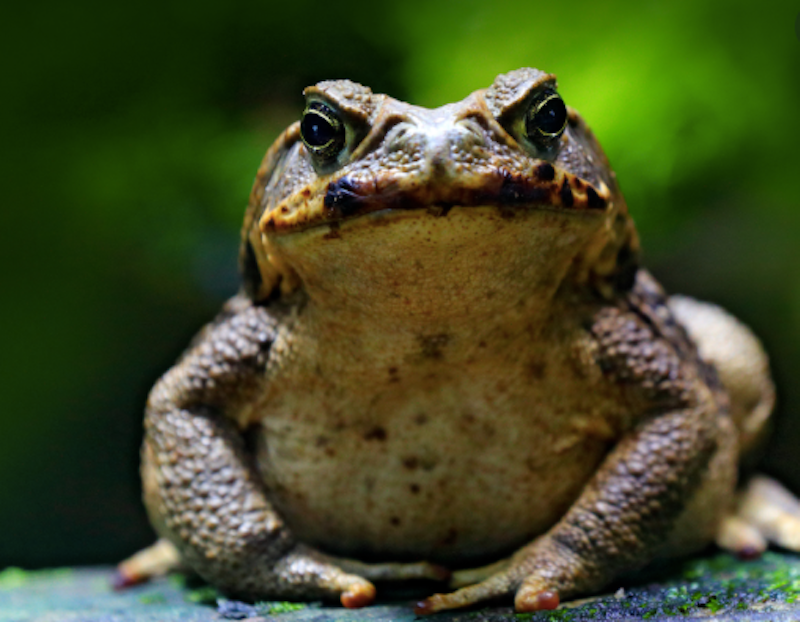 As a distraction to loose and mercurial thoughts of my own demise I scrolled through some photographs on my phone and landed glumly upon pictures of dead toads. The cycle path I regularly take runs alongside a canal, and come late spring—mating season for the toad, I learned—you often see the bloated belly-up bodies of dead toads all along the track. I’ve always presumed cyclists mow them down unable to decipher quickly enough their dark olive backs against the gray, often damp, surface of the path.

Last May, I spotted one yet to be run over, dismounted, and had myself a good old gawp at the much-maligned toad. Warted and webbed, it sat defiantly on the path as still as a rock, with the self-confident assuredness of a stockbroker who’s in on the act of market manipulation. It wasn’t going anywhere, and it didn’t seem scared, no matter how close I put the camera.

In George Orwell’s The Common Toad he argues that the toad has “just about the most beautiful eye of any living creature. It is like gold, or more exactly golden-coloured semi-precious stone, which one sometimes sees in signet rings, and which I think is called chrysoberyl.”

Staring up close, I began to assess my prejudicial association of the toad with ugliness. It felt unfair. The toad’s eyes were deep, wise, and their iris color is, as Orwell says, surprisingly beautiful. I came to appreciate the toad’s design, perfect in its form, the random symmetry of its bobbles and bumps. Its stillness and contentedness. But surely it wasn’t just my own spite that had written off the toad as ugly. Or maybe it’s a link that’s so often made and engrained into the collective consciousness, it goes unquestioned.

Whatever the case, it was croaking into the head of Hans Christian Andersen, whose 1866 short story “The Toad” has frog characters chastise a mother toad, with lines like: “She’s thick, and fat and ugly,” said the young green Frogs; “and her children will be just as ugly as she is.”

Toads often lose out to frogs. Frogs can turn into princes if you kiss them right, or steal movie scenes by falling from the sky as in Paul Thomas Anderson’s epic Magnolia—a phenomenon also referenced in the book of Exodus. But nothing appears to be romanticized when it comes to the toad. They don’t hop, they prefer to walk; they don’t ribbit, they belch.

Further evidence of the toad’s association with “the ugly” and by extension “the bad” continues in 1808 when William Blake depicts Satan as a squat toad whispering evil into the ears of Adam and Eve in his Paradise Lost illustrations.

And William Shakespeare’s As You Like It (1599) contains the lines:

Sweet are the uses of adversity;
Which, like the toad, ugly and venomous,
Wears yet a precious jewel in his head.

These telling lines, while hinting at a silver lining of sorts, also relate to the apocryphal phenomenon of “the toadstone,” which is a mythical stone believed to lie in the head of a toad, and was thought to have medicinal, healing qualities. The toadstone was first recorded by the Roman philosopher and naturalist Pliny the Elder in the first century, as the late American educator Irby Bruce Cauthen Jr. writes in his 1973 essay Satan “Squat like A Toad”:

“Pliny seems to have established the belief that the toad was ‘full of poison’; he declares however, that their spleen or liver may be used as an antidote.  Thus possibly laying the foundation for the belief in the toad-stone, that ‘precious jewel.’ But the firmly traditional view of the toad, both for classical and Hebraic cultures was that it was repulsively ugly and effectively venomous.”

As I squatted next to the squat toad, I felt some sympathy for the creature. I tried to move it off the path, and out of the way of oncoming cyclists, but it was having none of it, preferring to take its chances and continue to bask in the sun. Some things in life are worth dying for I guess.

The practice of toad-back-licking flickered across my mind, and while I pride myself on cavalier impulsiveness, stopping to randomly lick toads in an effort to get high, just because I noticed one, felt a touch too troglodyte-like. It was only mid-morning.

More recently it could be argued the makers of Mario Kart went some way to reviving the reputation of our traduced amphibian with their friendly, mushroom-y character, who went by the name of Toad. But, in yet another twist of unfortunate association, in 2018 the adult entertainer Stormy Daniels described former president Donald Trump’s penis as akin to “that mushroom character in Mario Kart.”

That’s one Toad I wouldn’t like to stare in the eye.