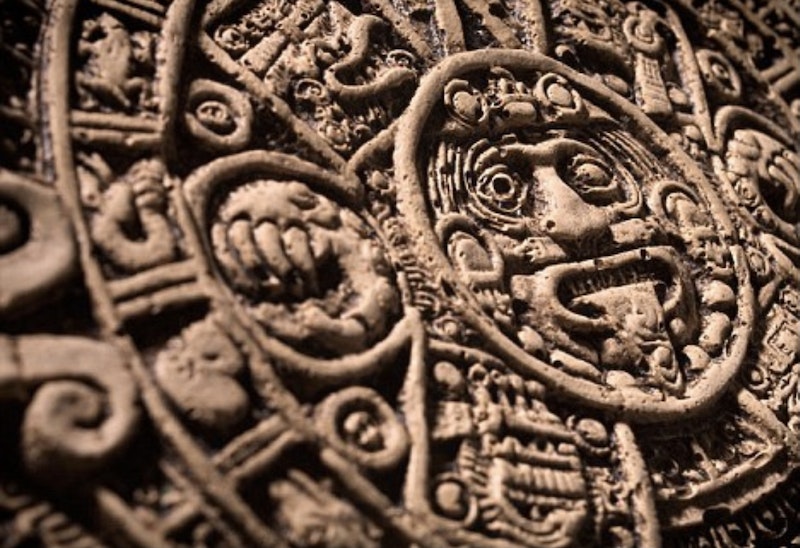 In The Revised Boy Scout Manual, William Burroughs’ unfinished attempt to create a blueprint for counter cultural revolution, he states:

1. Proclaim a new era and set up a new calendar.

5. Take land and wealth from individual aliens. Time to forget a dead empire and build a living republic.

It’s interesting that he should put devising a new calendar at the top of his list. In this he agrees with the I-Ching, the ancient Chinese meditation on time and change which emerged in the late neolithic period.

Fire in the lake: the image of REVOLUTION.

Sets the calendar in order
And makes the seasons clear.

It was often the case that when a new dynasty took over in China it would institute a new calendar. Hence the association between the idea of the calendar and the idea of political revolution as it appears in this hexagram.

A calendar is a measure of time. It’s supposed to reflect the progress of the seasons through the year, as well as to keep track of history. Our current calendar system, devised in 1582, under the aegis of Pope Gregory XIII (after whom it is named) is a clumsy tool, which only partially succeeds in doing what it’s supposed to.

It’s a modification of the earlier Julian calendar, enacted by Julius Caesar in 45 BC. Both calendars keep track on the solar year. The Gregorian calendar is slightly more accurate than the Julian Calendar, which assumes a year length of exactly 365.25 days, when it’s actually 365.2422 days long. Over the centuries there was a drift away from the real year, which meant that Easter, which is calculated by its relationship to the Vernal Equinox, was falling further and further away from its true date, and an adjustment was required. The date was advanced by 10 days, from Thursday October 4th, to Friday October 15th 1582, and new rules applied for leap years to take account of the difference.

It took centuries for the Gregorian calendar to be adopted around the world. It’s now the most widely used calendar in the world. Some organizations, such as the Eastern Orthodox Church, while they’ve adopted the Gregorian calendar for secular purposes, still hold to the Julian calendar for calculating religious holidays. This means, for example, that Christmas in the Eastern Orthodox calendar falls on January 7th rather than December 25th. According to one famous story, when the new system was introduced to the British Empire, in September 1752, people were so annoyed by the change it led to the so-called “calendar riots” in which they demanded the return of their lost days. This is an urban myth. It never actually happened.

The problem with solar calendars is that they take no account of the moon. Months become arbitrary units disconnected from the lunar cycle. Our months vary in length from 28 to 31 days and serve no purpose except to tick off the year in irregular and disorientating intervals. A true month is 29.53 days long and is usually measured by observation. The Chinese calendar, for example, measures the month from new moon to new moon, which is either 29 or 30 days long, depending on what time the new moon falls. The month is then divided into three “weeks” of either nine or 10 days. But a lunar year of 12 months is only 354 days long, meaning that the lunar year and the solar year will drift significantly apart as the years progress. The way the Chinese calendar deals with this is to insert intercalary months approximately every three years. Thus, the Chinese year varies in length from 354 to 384 days.

As it happens, the number of lines in the I-Ching is 384, an interesting fact which led the psychedelic explorer and magic mushroom user, Terence McKenna, to suggest that the I-Ching is itself a 13-month lunar calendar. He said that it followed the sun spot cycle, among other things, and used it to devise a sort of grand calendar on a cosmic scale, which he called The Timewave, which, he said, would reach its culmination on December 21 2012. That’s the day that history was supposed to have ended according to his calculations. Unfortunately, he was mixing up two calendar systems here and misrepresenting what the date actually means. The other calendar system he’s referring to is the Mayan long count calendar, which had accurately tracked the days from August 11 3114 BC, to that end date of December 21 2012, and which many westerners misunderstood to predict the end of the world. All it predicted was the end of the calendar cycle. The following day, December 22 2012, was simply the start of a new calendar, the day the calendar clicked back to zero, showing that all calendar systems are cyclical, even long ones.

Burroughs’ view of the Mayan calendar was that it was a device for controlling thought. As he said:

The Ancient Mayans possessed one of the most precise and hermetic control calendars ever used on this planet, a calendar that in effect controlled what the population did, thought and felt on any given day….

It could be said that all calendars have this effect. However you divide the year, some days will be more important than others. Whether it’s Easter, Yom Kippur, Diwali, or the Chinese New Year, days are set aside as sacred, with particular rites attached. On those days the population will be thinking, doing and feeling similar things. That’s why calendar systems are important, and why it’s equally important we understand them and learn what their origins are. Calendars can bind us together, but they can also tear us apart.

Take the seven-day week, for example. Days have an objective reality, as the measure of the rotation of the Earth, as do years and months, but weeks are an entirely human construct. The earliest reference to them dates from the Sumerian period in the Near East. The Babylonians celebrated a seventh day festival which probably fed into the Jewish notion of the Sabbath. The word “Sabbath” can be tracked to the Sumerian sa-bat, meaning “mid-rest," a term for the full moon. As to when the Sabbath is marked, this depends on whether you are a Christian, a Mandaean, a Muslim or a Jew. Wars has been fought over this issue.

Many calendars around the world don’t acknowledge the seven-day week. The Chinese calendar works around nine- or 10-day periods, while the Hindu calendar works around 15-day half-months. Weeks, as we understand them, probably arose as a reflection of the seven planets of the ancient world, which were understood as gods. The English names of the days still reflect this to some degree, with Sunday and Monday associated with the sun and moon, and Saturday with Saturn. The other days are named after Norse gods which may, or may not, be associated with planetary deities.

The most precise calendar system currently in use is the Persian Calendar, which dates to the second millennium BC, and which is accurate to less than one second per year, or one day in every 110,000 years. Compare this to the Gregorian Calendar, which is only accurate to 27 seconds a year, or one day in every 3236 years. This is because the Persian calendar is observational; it’stied to an astronomical event as viewed from a specific place in Iran: the Vernal Equinox as viewed from 52.5 degrees east, the Iranian time meridian. It’s this that determines the new year, called Nowruz in Persian, celebrated by Iranian people throughout the world. Once again this is a solar calendar, however, and Persian months are just as arbitrary and uneven as our own.

This is always going to be the case, whichever calendar system you use. Months don’t fit exactly into years and there will always be a drift between the lunar and the solar cycle. The only way to deal with it is to map the lunar calendar onto the solar year, so that the phases of the moon are displayed on a daily basis. Many calendars already do this.

In Wilhelm’s commentary on hexagram 49 of the I-Ching, he says:

Fire below and the lake above combat and destroy each other. So too in the course of the year a combat takes place between the forces of light and the forces of darkness, eventuating in the revolution of the seasons. Man masters these changes in nature by noting their regularity and marking off the passage of time accordingly. In this way order and clarity appear in the apparently chaotic changes of the seasons, and man is able to adjust himself in advance to the demands of the different times.

The Celtic year takes the form of a myth, of the battle between the Holly King and the Oak King, the personification of winter and summer respectively. This idea is reflected in the Wheel of the Year, the pagan calendar, which was adopted by Gerald Gardiner, the founder of the Wiccan religion, and Ross Nichols, of the Order of Bards, Ovates and Druids, in the 1950s. The Wheel of the Year combines two different calendar systems, the so-called quarterly and cross-quarterly days. The quarterly days are the precise astronomical events of the solstices and the equinoxes, which can be determined by observation. Stonehenge was built to mark these days, and still remains accurate over 5000 years after its construction. The cross-quarterly days consist of the traditional Celtic fire-festivals of Beltane, Samhain, Imbolc and Lughnasadh, in May, October, February and August respectively.

These festivals are approximately, but not exactly, half-way between the solstices and the equinoxes, and are still dependent on the Gregorian calendar to determine. This has led to some commentators trying to work out a better system for dividing the year. One such attempt was made by Merlin Hickman, known as Merlin of England, one the neo-druids who attends the Stonehenge open-access ceremonies at the monument four times a year. You can find Hickman’s reasoning and calculations here.

Such a system would divide the year into eight separate seasons, tied to precise observations of the progress of the year. If you were to combine this with a lunar calendar showing the phases of the moon, you’d have not only an astronomically accurate calendar, but one which reflected the real cycle of life on both a spiritual and a physical level. It would bring us back into alignment with the seasons, with the sun and the moon and the planet on which we depend.