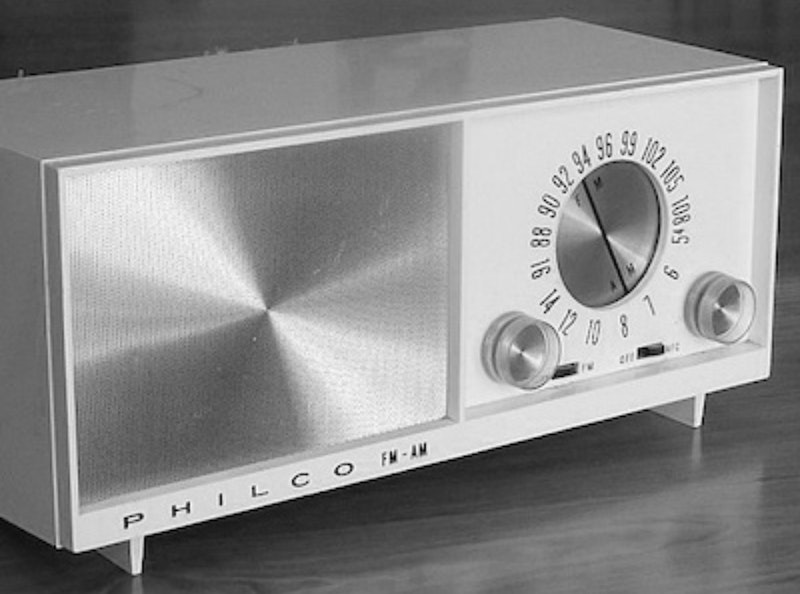 A Philco table radio on the kitchen countertop, Placid Kane chopped onions on the cutting board. As she worked, she listened to her husband's afternoon radio program.

It was always odd, hearing Roger's voice from the little speaker behind the metal grill. Though tinny, it seemed as if he were present. Sometimes she almost answered to something he queried, caught herself and laughed. Outside her kitchen window Placid could see Anne and Luke, ages four and two respectively, playing in the sandbox. Placid was looking forward to Thanksgiving, to be celebrated at her parents' home, per usual. She’d bring a pumpkin pie.

"Hi! This is Roger Kane here on Sunlight Serenade, and it's a pleasure to be with you this Friday afternoon. I'll be here until five o'clock. If you want to call in, Diamond 7-4387 is the number. Yes, hello!"

"Yes. I am calling for the lady who called yesterday previously with a garbage can problem," said a woman with a pinched tone.

"Well, yes. In today's Prentice Crier, on page 11, there is a small ad for Nelson's Hardware for plastic garbage can liners, if she's interested. I know I've used them and they are simply great."

"Well, this is the information we sought, and now we've got it!"

"I'll tell you, it keeps your garbage can clean. And you don't have to carry that heavy garbage can to the corner."

"Yes. Thank you very much! Goodbye!"

Roger cut to a commercial for a margarine that uses only the finest and freshest ingredients. A perky pizzicato theme played in the background.

The next caller was a man who spoke in a plain dry voice. "I'm calling in response to the fellow who called last week regarding a knife game with peg in the title. I believe what he was thinking of was mumblety-peg. Now, where they got the mumble from, I don't know. Unless the inventor mumbled. You know how boys are, heh heh. Well, I played that game 60 years ago. I'm 69 now, so we're going back a ways. But that's what I remember. I hope that can be of some use to last week's caller."

"Well, thank you, sir! Maybe another caller will know, for sure, the source of mumble in the name. Bye-bye!"

The next caller was an anxious lady who said, "Hi! I have a question. I was wondering if anyone could help me. I've lost a needle in a feather pillow, kind of a silly thing, but I was hoping a listener could offer advice on how to find it."

"Not a silly thing at all! Offhand, I think a magnet might help."

"Well, we thought of that, but we don't happen to have one in the house. We were wondering if there was another way."

"Well, we have some very astute listeners. Perhaps one will have an insight."

"Thank you for calling. Goodbye!"

"Hello! I'm calling because I have a recipe request."

"I was wondering if a listener might have a recipe for a layer cake with a German chocolate, not a sweet chocolate?"

"With German chocolate? Okay! We'll see if we can find one for you!"

"You are welcome! Bye-bye."

Then Roger narrated a commercial for Stu's Butcher Shop, rib-end pork chops for only 27¢ a pound. Or! Try lean center-cut pork chops, only 68¢ a pound. And with Thanksgiving coming right up, yessir, it's Waybess! Turkeys, 18 to 24 pounds, only 39¢ a pound. He followed the ad with an orchestral instrumental.

"Hello," said a woman, her voice a curious mix of timid and imperious. "I'd like to know the proper way to put away a tent for the winter."

"Yes, a tent. A green tent. Also, I have an oak dinner table, and cracks are forming along the grain. I would like to know if there is a way to correct this. One of your listeners may know of a way. Thank you very much."

"Thank you for calling! Bye!"

From there he played more records and took more calls, a few of which offered tips for basting a turkey, and the best way to thicken gravy.

"Oh, golly. Isn't that awful," gasped the next caller, a lady.

"I've got a recipe, but, oh my. This takes my breath away..." She sighed heavily and said. "It's for the layer cake, German chocolate instead of sweet chocolate. One half cup of butter or oleo. Phew... I cannot get my breath... I... I don't think I can continue..."

Roger took more calls. "It's probably best that I keep going, as best I can here." Then he read from a report, "President Kennedy and Texas governor John B. Connally, were both shot today in Dallas, Texas. Mrs. Kennedy is reported to have shouted, 'Oh, no!' An ambulance rushed them to Parkland Hospital in Dallas..."

Placid called Anne and Luke indoors and sent them to their rooms. She did this without thinking. If asked why, she wouldn't have been able to explain. She simply had to get them inside, safe, away from whatever. The tykes knew something was wrong, but were afraid to ask what.

Leaving the radio on, Placid walked to the living room in a daze and sat on the sofa. She stared into space and bit the knuckle of her right index finger. A boy rode past their ranch on a metallic-blue 24" Schwinn. It was a new bike, nice and shiny, but it was the old style, one-speed, fat tires. The boy wore a black polo shirt, cuffed dungarees, high-top Keds. As he pedaled, he yelled, "He's dead, the president's dead! Kennedy's dead! Now the Russians are going to bomb us to bits! Kennedy's dead!" Down the hill he coasted, leaning around the corner, a self-styled 20th century Paul Revere swaddled in sunshine.