The Anguish of the Suburban Ice Cream Man

Mac demanded the kids show their money before he handed over the goods. 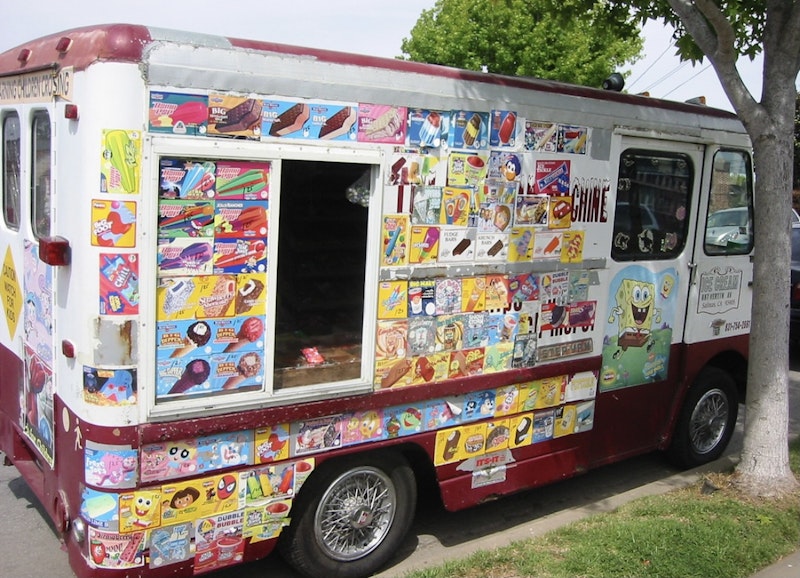 Our ice cream man’s name was Mac. He was a stocky ex-marine with a spiky crewcut and aviator sunglasses that hid his eyes. His truck had a Nixon for President sticker on the back bumper and the music box played “Hail to the Chief.” Mac was surly, impatient and hated kids. But his ice cream selection was top-notch. He had bomb pops, big sticks, fudgesicles, drumsticks and ice cream sandwiches.

I usually bought a Klondike Bar and a pack of Topps baseball cards. I also loved Wacky Packs, the goofy parodies of brand names such as Quacker Oats and Crust Toothpaste. (R. Crumb and Art Spiegelman were Wacky Packs artists.) My brother preferred Topps presidential trading cards. He learned he could trade any Republican president to Mac for free ice cream. Eisenhower got him an orange-vanilla creamsicle while Nixon yielded an Eskimo Pie. I drew a crude image of a wheelchair and gave it to Mac telling him it was a portrait of Franklin D. Roosevelt. This earned me two free packs of baseball cards.

Mac always stopped in front of our house. Kids gathered from surrounding neighborhoods crowding the truck and yelling for ice cream. Mac demanded the kids show their money before he handed over the goods. No doubt he’d been ripped off dozens of times.

One summer, while playing baseball in the street, we heard the familiar patriotic jingle of Mac’s truck. We ran to my front lawn and waited. When the truck came into view, it was moving faster than usual and appeared to be weaving. It took a corner at high speed, spun out of control and slammed into a fire hydrant. A towering spout of water shot into the air.

We ran to the scene. The windshield was shattered and the front bumper smashed. Mac was sprawled out on the floor, hand over his chest, his face contorted in a horrible grimace. Water flowed everywhere creating a river of ice cream, candy and gum. The kids began grabbing treats as if they were at a piñata party. Mac watched in horror, his worst nightmare come to life. He mouthed the words, “Man down.”

By the time adults emerged from nearby houses, we’d scraped the innards of the truck clean. Paramedics arrived and took Mac away. We later learned he’d suffered a heart attack and concussion. He’d miss six weeks of prime summer ice cream sales. In his absence, a new mobile vendor appeared — Bob the Fruit Man.

The highlight of the summer occurred a few weeks before Bob’s arrest. Mac returned to work with a shiny new truck that played the standard “Turkey in the Straw” ice cream jingle. No one asked about his health but he was struggling. He’d lost weight, stopped shaving and sweated profusely. When he heard about Bob the Fruit Man, he grew testy and peppered us with questions. “Who is he? When does he come? What does he sell?” When he learned Bob was Mexican, he exploded.

“You tell that dirty spic I’m coming for him. This is my turf and he has no right to be here.” Someone passed the message to Bob. “There’s room for both of us,” Bob smiled. The kids goaded Mac. “Bob’s not scared of you,” one said. “The fruit man’s gonna kick your ass,” another added. Donald Wolf, who later became a sports bookie, took bets. He made Bob a 5–1 favorite since he was younger and in better health. He added a 25–1 prop bet that Mac would have another heart attack.

A few weeks later, on a 100-degree day, Mac showed up, sans jingle, and parked his truck out of view on a dirt fire road. He knew Bob would arrive around four p.m. Jimmy Sandler happened to be roasting ants with a magnifying glass nearby. He ran through the streets like Paul Revere banging on doors, warning everyone about the looming confrontation. My brother and I climbed on the roof for a better view. When Bob’s bright yellow truck appeared in the distance, we yelled, “He’s coming. Get out of the street.” Everyone gathered in the Kravitz’s driveway since it was elevated and afforded the best view.

Bob drove past the fire road without noticing the ice cream truck. Mac followed. Bob made a right onto our street. Mac sped up and pulled alongside the fruit truck. He made contact with the rear quarter panel causing Bob to swerve and nearly flip over. Bob screeched to a stop. Mac stopped 20 feet behind him. He bounded out of his truck and marched toward Bob.

“Get out of the truck now,” Mac yelled. Bob was stunned. Mac slammed his fist on the driver side door. Bob lowered the window a few inches.

“What are you doing?”

“Get out of there you taco muncher.”

Mac was like a rabid dog, his face red, muscles taut. I worried he might have a gun or knife. Bob must’ve thought the same thing. He jumped out the passenger side door and began running. Mac ran after him. After about 100 feet, Mac tired. He hunched over, hands on his knees, struggling to breathe.

Bob slowly approached him. “I don’t want to fight you, man,” he said. Mac tried to speak but he was too exhausted.“We can work something out,” Bob said. “I can come every other week. How does that sound?”

“I don’t want you coming at all,” Mac grunted.

“I have a permit just like you. You don’t own the neighborhood.”

“Ice cream has too much sugar,” Bob said, “It makes kids go crazy. That’s why I sell fruit.”

Mac appeared confused. Bob pointed down the street. Mac turned to see his ice cream truck again ransacked by kids. He ran to the truck, yelling. Kids scattered, everyone with a horde of goodies. I was one of the looters. I tallied a few popsicles, ice cream, a pack of Pop Rocks and some candy bars. I regretted not grabbing any baseball cards.

Mac never returned to our neighborhood. After Bob’s arrest, he also vanished. We were left with the milkman, the meat delivery guy and an occasional visit from the Oscar Meyer Wienermobile. None of them held a candle to Mac or Bob.