You are not a "writer" until someone calls you one. Right? 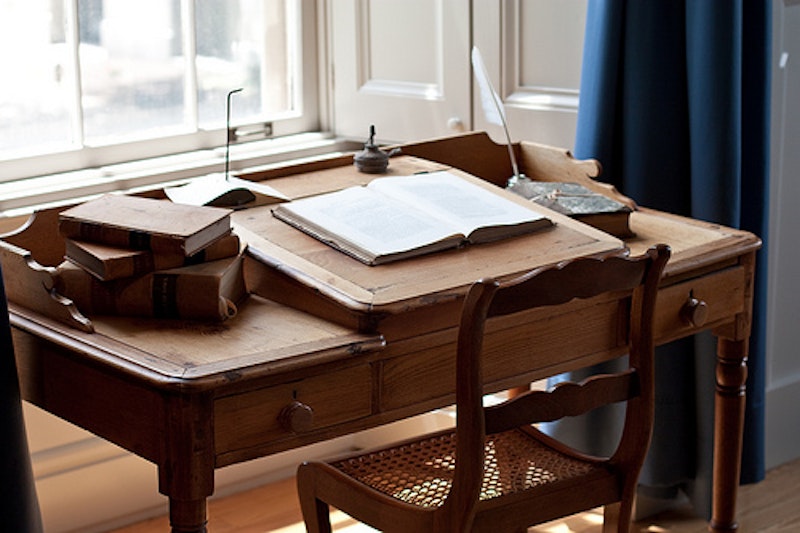 As a kid, I wanted to grow up to be Fievel Mousekewitz, star of the 1986 movie An American Tail. Early in the film, Fievel, a cartoon mouse, is separated from his family on their voyage from Russia to the New World after an army of cats destroys their village. After a solo journey to Ellis Island in a glass bottle, Fievel survives alone on the streets of New York—which are not, despite rumors, paved in cheese. He works in a sweatshop, befriends a vegetarian tabby, and participates in a Helen-of-Troy attack on a group of despotic cats before being reunited with his family. Fievel sings through all his adventures: mournful laments to his missing sister, songs of friendship and solidarity with his fellow orphaned and oppressed. That was what I most admired in Fievel: not that he was courageous in the face of adversity, but that he sang in the streets as if Gilbert and Sullivan just appeared in the air. I also liked his hat, which was blue and floppy with a hard brim.

Once I was old enough to admit the impossibility of growing up to be a cartoon mouse, I found a more realistic goal: I would become a newsboy. Specifically, I wanted to be Les, Christian Bale's sidekick in the 1992 musical Newsies, based on the 1899 paperboy strike against the Pulitzer and Hearst publishing companies. The newsboys weren't just independent and resourceful, but they also wore tap shoes and suspenders. Like Fievel, the newsies broke into choreographed song and dance at moments of both tragedy and pleasure. More than a mouse, more than a newsboy, that’s what I wanted: to live in a musical. And so I tried. My twin sister and I spent afternoons rehearsing our dance to such tunes as the Neville Brother's "Thank You Sister Rosa," a ballad about the Montgomery bus boycotts. Our favorite time to break into this signature piece was while waiting for the school bus. While the Montgomery Bus Boycott might not be the most accessible song for nine-year-old white girls from the North Carolina mountains, anything with a chorus was welcomed in our repertoire. We were as likely to demand our parents watch our interpretation of "Sympathy for the Devil" as "White Christmas."

Unfortunately, I had little aptitude for song and dance. When I campaigned for presidency of the theater club in high school, I was soundly defeated by a popular girl who could hit a high c and won the female lead in our spring musical four years running. Despite my passion for musical theater, I was routinely cast as Bystander Three or Villager Seven. My sole speaking part was as a waiter in Guys and Dolls. I practiced my line for weeks, staring in the mirror and experimenting with inflection. When the time came, I forgot to bring Sky Masterson and Sergeant Sarah Brown their menus.

A lack of talent didn't deflate my dreams for a future in which bystanders dance together in the grocery line. While my classmates applied to colleges, I wondered if it'd be easier to find work as a newsboy or as a chimney sweep and if voice lessons were tax-deductable. But during senior year, my parents confiscated my Rent soundtrack and handed me an SAT study guide. It was time, they said, to get serious. I applied to the only college that would have me and planned to become the darling of the theater department.

When I moved into my dorm, my roommate, Maureen, asked what I was going to major in. I paused from hanging my autographed Rosemary Clooney headshot. I hadn't been accepted to the school's musical theater program, a blow I attributed to the department’s lack of vision. "I don't know," I said. "You?"

Creative writing. I liked the sound of that. I pictured the typewriter I would restore, the cigarettes I would smoke, the leather volumes I would carry tied together with a belt. A writer could easily pull off a newsboy cap. I declared my major that afternoon.

I spent the next five years in writing workshops. My classmates were in the program because they wanted to be writers, not because they wanted to look like writers. They could see this difference in me. They said that I needed to work on my transitions, that my poetry was prosaic and my dialogue forced. I said that Forster would never wear those pants and even Emily Dickinson washed her hair every once in a while. They thought I was a fake, I thought they were unfashionable, and we both knew it.

When it came time to choosing a discipline, I first considered poetry because it was the only genre where a few lines are enough, but I couldn’t raise my grades above a C. The only poem I wrote that received even mild praise was about a man who cut down tree branches while standing naked on the hood of his truck. My professor complimented my imagery: "Look, his balls,” I wrote. “How they twist / And sway / With the / Chainsaw rhyme." I later learned that my instructor had a thing for the working class and public nudity. When poetry failed, I decided to concentrate on fiction, which had the benefit of being a genre people actually read. I was no better at prose, however. All of my short stories were re-writes of Blueberries for Sal, which my dad read to me as a child. I would plan Camus-inspired micro-fiction about the assassination of the first lady of New Jersey and would end up with a little girl covered in blueberries talking to a bear cub.

I told myself that if I couldn't write, at least I could drink, which is more important to being a writer than actually writing. And drink I could do. I was a young master at drinking, an aspiring Hemingway with no talent for words but a hearty liver. The self-destruction of the literary appealed to me. What better excuse to open a bottle of Merlot at breakfast? But after I poured a glass of wine and sat at my desk, I could think only that I wished my audition for the musical theater department gone well.

After I turned in my senior project—a novella set in a blueberry patch on the moon—I stopped writing. I had acquired all I needed to look like a writer, including an impressive collection of Moleskins displayed on my bookshelves as if they were actual books instead of journals filled with grocery lists and doodles of my classmates. I didn't write more than an email for three years.

Starting to write again was accidental. Unemployed for much of my early 20s—surviving off girlfriends and parents and unemployment checks—I started composing Craigslist ads to pass the time and amuse myself. I advertised for someone to pose as my Myspace girlfriend to make an ex jealous. I posted a listing entitled, "Wanted: Someone to Hold the Shower Curtain." I tried to sell a mounted teddy bear as a masterpiece of taxidermy. As opposed to a circle of peers and teachers ripping apart my poems about watching feral cats do it doggy-style in my side yard, my audience was anonymous. When readers didn't see the humor in my posts, it was their fault, not mine. And when they emailed to say that my ads made them laugh inappropriately loudly at work, I felt the satisfaction I never had as a student. It didn't feel like writing, and so I liked it, and kept doing it. I started a blog, I started submitting, and I looked for freelance gigs with nominal paychecks.

I recently met a best-selling author who has been called the most promising writer of his generation. I bought him a drink and I petted the Chihuahua he carries everywhere with him and asked about what it’s like to have an editor and a publisher and a name people know. He told me that he shuts himself away from light and people and text messages and writes for 12 hours a day. He asked if I was a writer, and I didn't know how to answer. Can you be a writer until someone else calls you one? I no longer have the costume, but I have the pages of work, thousands of words, miles of archives. Besides, if I will never be Fievel and I will never be Les and I will never break into choreographed dance on the streets—if I can't live in a musical—I might as well live on the page. So, I told the famous author that yes, I’m a writer.