Retracing the steps that lead to Declaration of Independece. 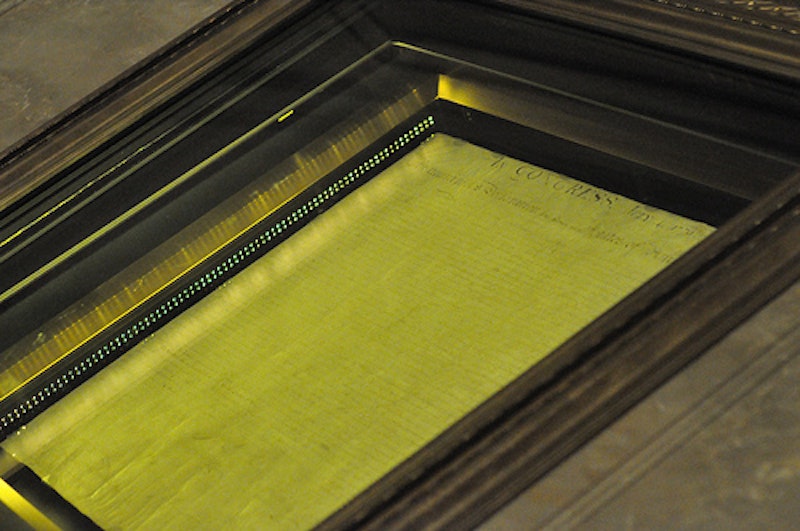 The Fourth of July is coming up and patriotic fanfare is beginning to resound across the county. For Philadelphia, the city in which I live, Independence Day is a huge deal, its 10-day celebration, "Welcome America," marked by historical re-enactments, special events, concerts, parades, food and fireworks. Philadelphia celebrates Independence Day with style.

Philadelphia is justly proud of the role it played in the nation’s birth. It was here in 1776 that colonial leaders like Benjamin Franklin, George Washington, John Adams and Thomas Jefferson gathered together to form the Second Continental Congress and debate the future of the 13 colonies. On hot summer day, the Founding Fathers resolved that the colonies would henceforth and forevermore be one free and independent nation by issuing the Declaration of Independence. Or is that what really happened?

Arguably one of the most important documents in American history, the Declaration of Independence, is popularly believed to be the instrument by which the American colonies declared themselves independent of the British Empire, but that is actually not the case. On June 7, 1776, Richard Henry Lee, a Virginia delegate, presented the Resolution for Independence to the Second Continental Congress. Also called the Lee Resolution, it stated, “These United Colonies are, and of right ought to be, free and independent States, that they are absolved from all allegiance to the British Crown, and that all connection between them and the State of Great Britain is, and ought to be, totally dissolved.”

Since some delegates did not have authority from their state governments to vote for independence, enactment of the resolution was postponed. In the meantime, three days after it was put forward, a Committee of Five, composed of Massachusetts’ John Adams, New York’s Robert Livingston, Connecticut’s Roger Sherman, Pennsylvania’s Benjamin Franklin and Virginia’s Thomas Jefferson, was established to draft a document that would serve as justification for severing ties with the British Empire. Jefferson was selected to write the first draft, which he did in 17 days. The document itself, actually titled A Declaration by the Representatives of the United States of America, in General Congress Assembled, was introduced before the entire legislative body for debate on June 28, 1776. Congress ordered that the draft “lie on the table” or not be decided upon until another pending motion, the Resolution for Independence, be resolved.

When Congress convened on July 1, 1776, the debate over independence continued. After it became apparent that some delegates still were not certain that independence should be declared, the vote on Lee’s Resolution was postponed again. On July 2, the Second Continental Congress passed the Resolution for Independence, one state abstaining, and 12 states voting in favor of it. The United States of America had officially severed all ties with Great Britain.

With independence now a settled issued, the Continental Congress turned its attention to the Declaration and the reasons it would give to the world for its actions. After passing the resolution, Jefferson’s draft of the Declaration was re-read, and then Congress adjourned. On the following day, July 3, the members of Congress scrutinized the document for the third time. Two passages were stuck out; one, a scathing reference to the British people, the other a vituperative denunciation of the slave trade. Otherwise, the Declaration as drafted by Jefferson was approved by the time Congress adjourned on July 3, but not formally accepted until the following day, July 4, and then sent to the printers’ to be published for the American people.

The Declaration of Independence, as it later came to be called, consisted of two parts. The first established a political philosophy that affirmed the right of the people to overthrow an existing government and establish a new one. This right of revolution was expressed when Jefferson stated:

We hold these truths to be self-evident, that all men are created equal, that they are endowed by their Creator with certain unalienable rights; that among these are life, liberty and the pursuit of happiness; that to secure these rights governments are instituted among men, deriving their just powers from the consent of the governed; that whenever any form of government becomes destructive of these ends, it is the right of the people to alter or abolish it, and to institute new government, laying its foundation on such principles and organizing its power in such form, as to them shall seem most likely to effect their safety and happiness.

Jefferson’s formulation of the people’s right to revolt against an unjust government as expressed in the Declaration was nothing new, but rather derivative of the social compact theory that had been around since the 17th century. According to philosophers such as John Locke, individuals in a “state of nature,” not bound by governmental constraints, act only within the strictures of their own conscience. To avoid the resulting anarchy that comes from living in a natural state, rational individuals will voluntarily give up their freedoms or consent to be governed in order to obtain the benefits of government. Since legitimate political order derives from the consent of the governed, abusive regimes can be deposed as is right and just.

Jefferson’s adaptation of the social compact theory as a basis for political authority provided a justification for the American Revolution as long as evidence existed to prove the British regime abusive. In the second part of the Declaration, Jefferson went on to provide this evidence by listing the colonial grievances against the British monarchy. The list was long, and cited, among other things, the king unjustly cutting off international trade, imposing taxes against the people’s will and suspending the right to trial by jury. Jefferson’s stark rendition of the monarch’s sins was most effective, geared as it was toward demonstrating the absolute tyranny of the British political authority over the blameless colonists.

The Declaration, upon its initial publication, served its purpose in announcing to the world the reasons for the American Revolution.  Oddly enough, after the Revolution ended, the Declaration was largely ignored in Fourth of July celebrations, as the act of declaring independence was deemed more important than the text of the document. Gradually, however, Jefferson’s recitation of the “unalienable rights” gained new prominence, especially for marginalized groups who looked to the Declaration to provide meaning and support for the causes they espoused. In particular, the Declaration came to be an important influence on the debate over slavery. Abraham Lincoln, for example, believed the ideas expressed in the Declaration on the equality of man were part of the nation’s founding principles and certainly were to be used in interpreting the Constitution when considering slavery’s legality.

Today, of course, the Declaration of Independence looms large in the public consciousness. The “unalienable rights” listed therein are recited over and over again, as a justification, not just for the American form of government, but also for the American way of life. For the city in which it was written, adopted and first published, the Declaration is a reason to feel proud.