Questing Amid the Ancient Rocks

Free Solo, a climbing documentary, and Deep Past, a paleontological novel, stir thoughts on mortality and endurance. 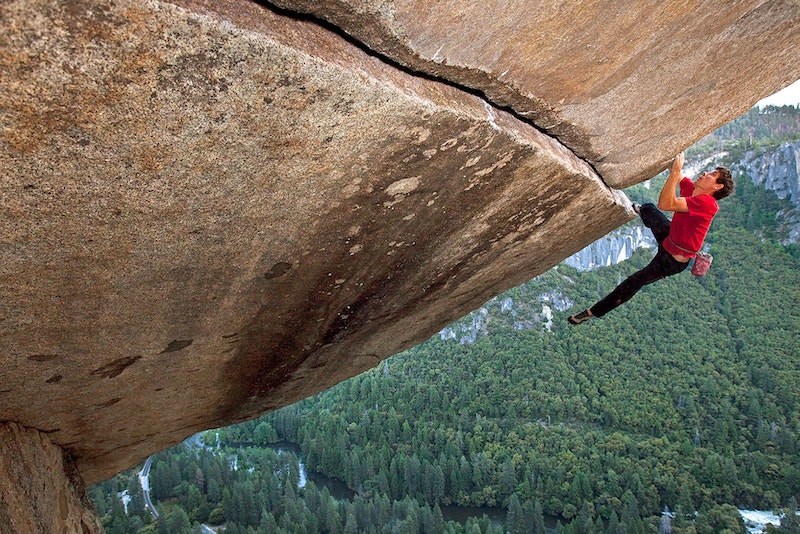 Free Solo is a 2018 documentary about rock climber Alex Honnold and his 2017 effort to be the first to climb Yosemite’s soaring rock face El Capitan without ropes or harnesses. My wife and I hadn’t heard of the film before finding it on pay-per-view, and not knowing the outcome made watching his death-defying feat all the more intense. Even so, as I found upon re-watching, the film compels rapt attention even when one knows what will happen.

Shortly after the documentary opens with the sound of wind and a glimpse of Honnold climbing the sheer face without equipment, we cut to a talk-show host interviewing him about such climbing, known as free soloing. “Here is what I don’t understand,” she says. “One little mistake, one little slip, and you fall and die.”

“Yeah,” he says nonchalantly. “You seem to understand it well.” Back to him on the formation, now with voiceover: “I feel like anybody could conceivably die on any given day. Soloing makes it feel far more immediate and much more present.”

I watched this film with mortality on my mind. Shadows of illness and aging have fallen upon my family in recent months, darkening rapidly in recent weeks. That might’ve made me skeptical about Honnold’s situation: a man in his early 30s, in excellent health, choosing to put his life in extreme danger. In fact, though, I came away with high respect for him; no less so given the film’s indications of damage in his emotions and relationships. Having a steady girlfriend is an unfamiliar delight that becomes a complicating factor. After a reminiscence about his mother’s admonitions to him as a child that “good enough isn’t,” Honnold refers to “the bottomless pit of self-loathing” as “definitely the motivation for some soloing.”

Right after watching the film, I read an Atlantic article, “Free Solo Is Not a Life Lesson,” which struck me as showing the dangers of journalistic desperation to fill up a page or produce traffic. The writer, Ian Bogost, makes a case that “Honnold’s accomplishment isn’t transferable to just any domain,” because free soloing requires particular conditions—specific training, a vertical rock face, etc.—that don’t come up in other fields. That’s like commenting on a ballerina’s performance that it isn’t the sort of thing done by someone not wearing a tutu.

Bogost acknowledges that Free Solo gives a general lesson people can take: “to pinpoint the goals that they want to accomplish, and to pursue them with determination.” But the film evokes themes beyond that obvious advice, including the difficult tradeoffs that can arise from relationships (with multiple people’s goals, including their hopes for each other, coming into play); and the possibility that one might become too driven, whether to achieve something specific (at the expense of other goals) or just to achieve, period, so as to prove one’s worth.

Such themes also figure in a new novel, Deep Past, by Eugene Linden, which like Free Solo involves rock faces and an ambitious protagonist; it too opens with wind howling, in this case across the steppes of Kazakhstan, as fossils that are five million years old are uncovered and come to the attention of Claire Knowland, an anthropologist in her early 30s who recognizes that the ancient bones could overturn science’s picture of the rise of intelligence on Earth.

Claire must navigate a complex path involving corrupt power brokers, nervous funders and envious scientists, while falling in love with a Russian geologist who carries his own secret baggage. Ultimately, her situation involves great-power maneuvering, a professional assassin, and the looming presence of a rocky formation. It’s a fun story, with interesting extrapolations from real-life scientific matters of climate change and animal intelligence, and with the very human theme of trying to achieve something noteworthy in the world.

—Kenneth Silber is author of In DeWitt’s Footsteps: Seeing History on the Erie Canal and is on Twitter here.