They don’t hide behind little pricks and big guns. 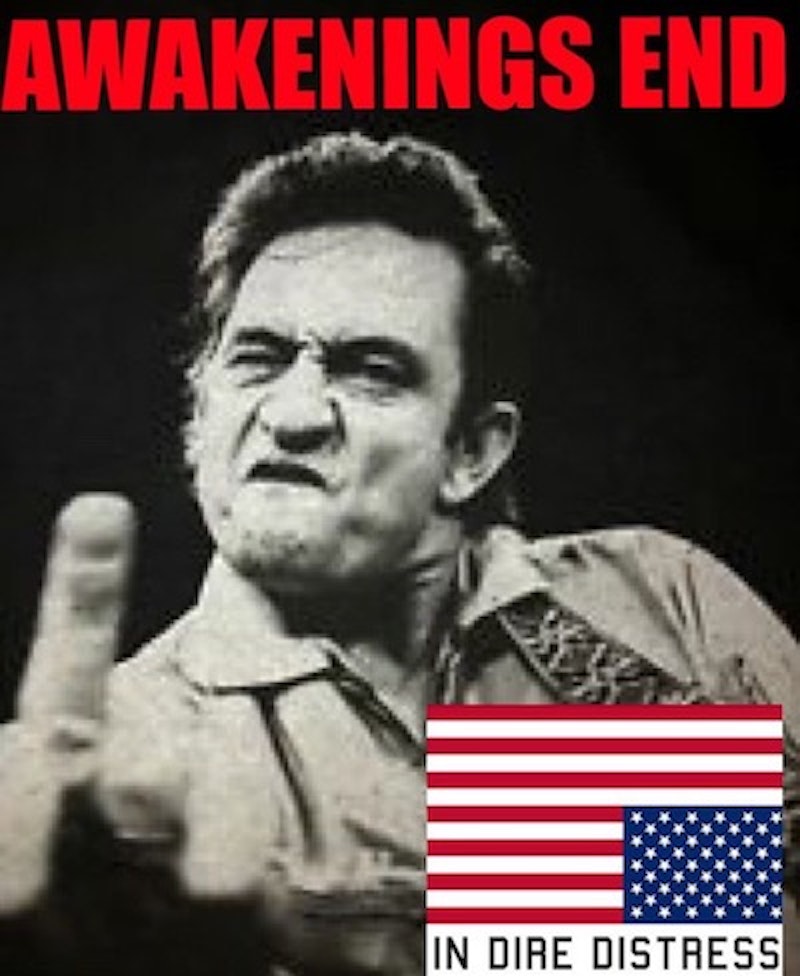 Legacies fade before disbelieving eyes. Illusory years weigh heavy upon an enduring world. Seemingly free from want or care. Needs consume, all growing bigger than desire’s full belly. All is vanity in funhouse mirrors. When achievements accomplished and honors are bestowed adding up to less than zero. No show-stopper finale. The big finish is forgotten by the next to fall in line. The show must go on.

Somebody once said it best, “It’s better to burn out than fade away.” It’s of little comfort to believe what’s done in acts of unselfish compassion actually matters. Johnny Cash is another mythic figure whose history is carved into our dingy craniums culture of pop personality. The bigger-than-life Man in Black towers above the rabble. Iconic champion for the commoner, without compromise, the great unwashed masses of downtrodden underdogs applaud the unwilling hero. Staunch supporter of the old song and dance, fighting injustice in a never-ending battle of lost causes. Truth, justice and some kind of other way to live. Some call it living the dream. Yet too many cannot afford the luxury.

Prisoners of conscience objection, ex-cons, disenfranchised minorities, illegal aliens, immigrants of poverty's rapidly diminished returns. To kneel bowed and humbled before mighty overlords. In some concentration camp of the damned. Their only crime is skin color and empty pockets.  Where are the outspoken voices now? There are many mythic figures from the past like Johnny Cash. Woody Guthrie, Pete Seeger, Big Bill Broonzy, Aretha Franklin, Richie Havens, Leadbelly, Joan Baez, Phil Ochs, Billie Holiday, Bob Dylan, Gil Scott-Heron, Paul Robeson, The Last Poets, John Lennon, Mahalia Jackson, Mimi & Richard Farina, Nina Simone, The Smothers Brothers and any other Tom, Dick or Harriet among a myriad of others with or without name recognition go on. The few who battle the many who would take away all basic rights.

Not so much for who they are but for what they did. What they represent. Those who fight and maybe get burned, can hold the flame aloft and sing out loud in songs of honest protest. To rally against injustice, question the leaders that be, fight fascism, bigotry and hatred of fellow humans. Become a de facto spokesperson for all who have no voice in the bleachers of people with no power. In their humble stead to rise up in solidarity and take back what is woefully ours to keep.

To right the wrongs, make the narrow straight and walk that crooked mile to the promised land. Forget about all those people and Johnny Cash for a silly split second and recall this sorry excuse for a naive children's song sung as clueless Sunday school kids along with the unquestionable obligatory standing for “The National Anthem” and pledging hand over heart allegiance to a flag of death and destruction. I guess Jesus went to Chicago or another kind of hell someplace not around here.

Jesus loves the little children
All the children of the world
Red, brown, yellow
Black and white
They are precious in His sight…

Jesus takes a backseat to all the demented con-artist creeps and sicko frauds that lord over a sorry lot of faithful believers. Bold-faced lies slapped upside the hard noggins of civility. The Vatican church of faithful denial and loving complicity has nothing on us but fear. Thoughts and prayers abound like flies. Herds of sheep led to slaughter in history’s blood-soaked flights of fancy. Jesus loves the little children; it could be a happy song for sexual predators. Some sort of Walt Disney demented utopia for creeps in the name of god. All those red, brown, yellow and black folks exploited by witless waspy whites. Not in my neighborhood. Go back where you came from. Inhuman, savage beasts.

Buoyed by the wings of youth, the guiding light was and still shines every place at once for all to see. To do no wrong and believe better days are ahead and easier ways to live life in the modern melee of carnage from the lamest of the lame. A ball of confusion in the seed of an ideas calm chaos across an ever changing stage. The likes of Johnny Cash moved the world a minuscule fraction of hard fought millimeters. Like Atlas breaking his back, holding up gravity’s thankless planet. To speak out against anything or anyone who would even consider prohibiting freedom. Freedom to think say and do whatever one wishes. It comes naturally without hurting a single other soul in the process.

Freedom to exist on the earth happily. A blissful ignorance, a gentle nod to say, affirmative, yes oblivion be damned. Down with tinhorn dictators. Why we must condemn and hurt our fellow inhabitants of this broken dream boggles the gray matter. Become what we fear most and do what must be done. Rewriting the protest songs that represent revolution and resistance to any group in revolt against the stupid machine let alone any single protester. The right to be left alone. To be at peace and stay calm no matter what reality throws at you. Tear it down and start all over. We need new protest songs and the singers brave enough to sing them.

True patriots don’t hug flags. They don’t hide behind little pricks and big guns. They don’t keep copies of Mein Kampf next to their bed. No need to foment hate or preach lies that boast loudly how great, supreme or big their brains are. How terrifically fab they think are. To rape little girls and pillage and ransack dignity and respect as you watch numb, dumb and mute nearby. They’ll tell you and keep telling you until you turn your back and walk away. Ignoring them for the little dried-up shits they really are. All the money in the world can’t save them. And like history itself, once again they swing by their balls, stinking as they sway in the bloody public square.