Pretending to Believe in Santa

We know you know the Elf of the Shelf isn't real, kid. 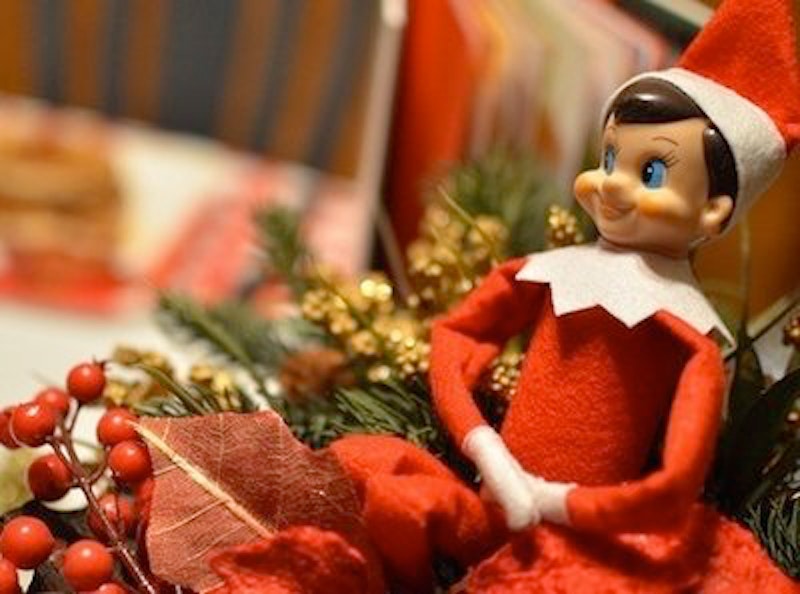 Last year I wrote an article called "Someone Forgot to Move the Elf" about how my then nine-year old son, on the verge of Santa uncertainty, came downstairs one morning and accidentally slipped about the magical movements of the godforsaken "Elf on the Shelf" tradition that's been hoisted upon us by Pinterest and Hallmark. I made an assumption back then that when the holiday season and fourth grade came this year, he'd be too old for such shenanigans.

Yet one day, close to Thanksgiving last month, Bobby, now 10, casually looked up from his Minecraft game to ask me if I thought the elf would be back this year. I swallowed. My mind raced as I tried to remember where it was packed away—permanently, I'd thought.

"Do you hope he comes back?" I asked, using my tried-and-true parenting delay tactic, learned over raising three teenage girls and having to tackle awkward period and sex conversations, of answering a question with a question. "I don't know," he said noncommittally. "I guess so, because I don't know if he has another house to go to." He returns to the Minecraft game, finished with the subject.

Jeeeeesus Christ. See what you've done, Hallmark? Homeless fucking elves. So now I'm twitching because I obviously have to not only hunt down the elf, but also enlist my 12-year-old to move the damn thing for all of December again. She won't mind, though. She's the "leave a half-eaten candy-cane-flavored Hershey Kiss next to the elf” type, anyway. We went into a Hallmark store the other day and she pointed out that there are now outfits available for the Elf on a Shelf.

"Look, Mom!" she exclaimed. "Can't we just get him the hat and scarf and mittens set?" Oh hell no we can't, honey and we are not getting him a reindeer either (oh, they have clothes for the reindeer, too). I remind her not to move the elf every day, either, because in order to cover myself for when I forgot to move the thing, I've always told the kids that if the elf doesn't move it means you were good and he didn't have anything to rat them out to Santa for.

It's sad when your last kid stops believing in Santa. Mine are now 21, 17, 12, and 10, so this year is really it, and I do have a sense of melancholy. I know Christmas mornings in the future won’t be the same. I know that Bobby doesn't really believe, and that he's doing that thing kids do where they don't want to admit they don't believe yet, because it's just so awkward for everyone. He was scrolling through the Nerf guns on Amazon the other day, and, trying to determine which model was right for putting on his wish list, he delicately asked me, "So how much do you think Santa would spend on a Nerf gun?"

Whoever started this Elf on a Shelf con needs to come out with some kind of transitional phase guide. We don't want him to disappear completely. Next year, when I'm sure Bobby would rather melt than admit he believes in an elf, he'll still like seeing the guy around. Maybe we'll just hang him on the tree for future Christmases. All the kids will like to see him there—he has a tiny sticker on his cheek from the year he fell from the staircase and received a "band aid" at the North Pole. He leaves candy canes on Christmas Eve. He's been around their whole lives.

As much as I've complained about the elf over the years, part of me was thrilled that day when Bobby wanted him back this year for one more season. Maybe I’ll get the elf the stupid mittens.