One bird helps another in walking the “streets” of 1500s jungle. 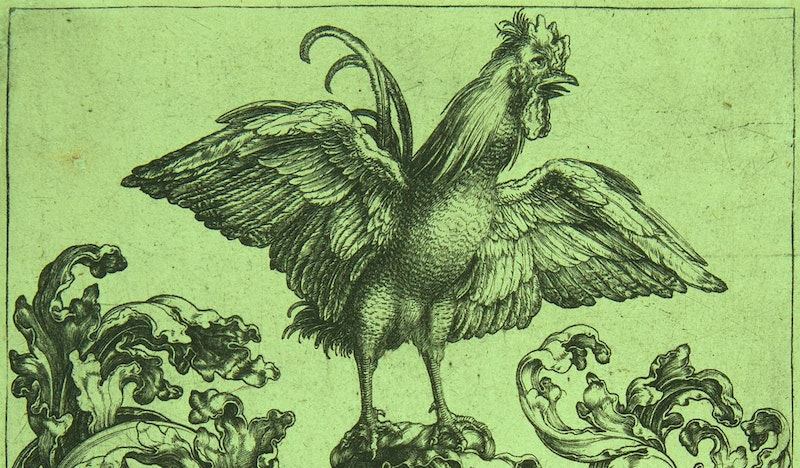 Pictured: The author circa 1503. No illustrations or depictions of Polkadot Polly are extant.

I was raised in an orphanage, but wasn’t raised a nun. Not my calling. I walked the streets for a number of years before I met Rooster and met a lot of interesting people: some I remember, many I’ve forgotten, and a few I’ll cherish the memory of forever. One such soul was Polkadot Polly, a black and white speckled robin with striking, surreal perfect circles all over her fur, as if printed on. This was hundreds of years ago, so no one trusted Polkadot Polly, they all thought she was the devil incarnate, an outsider, an intruder, or at best, a freakish loser that no one wanted to talk to or be seen near. After participating in the mutual mocking of this new peer, I felt sorry for Polkadot Polly and decided to befriend her. Everyone else I knew in the jungle was a whore, anyway—in mind, body, and soul. Not Polkadot Polly.

“I don’t know where I’m from,” she told me. “I don’t remember the first part of my life. I don’t even know what my first memory is. I think maybe it was looking for rice… a bath with my mother… I don’t know… I don’t even know if I had a mother.” I told her not to worry, everyone has mothers and fathers, even if they’re not around. “But how can you tell? If you never told me that, how would I know? Where did I come from? I’m still so confused by everyone and everything around me.”

Polkadot Polly struck a stunning figure at odds with her at times punishing insecurity. That coat was wild, really beautiful in a classic sense, a bird that any great artist would’ve spied and immediately rendered into eternity with oil and canvas (not that they would’ve had to try very hard: Polkadot Polly knew her cues and always noticed when someone was watching her). But there were no paintings or photographs because we didn’t know about them ourselves—we were in the jungle. There were restrictions on travel and limitations on our knowledge. What could we do? We didn’t even know what century it was, or what calendar to go by. It’s amazing to think you people didn’t get it together until the middle of the 1500s. I hope whoever “Gregor” was got credit for his calendar and ample royalties for his grandchildren.

Bigotry is nothing new. Polkadot Polly was mercilessly teased when she wasn’t conspicuously avoided and talked about behind her back. Ironically, it was true what she said of others, “They’re all out to get me”—they were, but they didn’t have anything planned, really. They just didn’t feel comfortable around her. Anxiety and contempt breed the same, and Polkadot Polly was only so forgiving of the less sensitive birds around her. “I hope a tree falls on all of them so I can watch them die slowly.” It wasn’t fun, but I let her get the poison out. Life as a female avian nightwalker is no walk in the park today (pun), but it was even harder 500 years ago.

The male birds always got more clients: monkeys, elephants, giraffes, various extinct mammals that we never named and you’ve never discovered fucked all of our “friends” like pigeons. (Again, this was before pigeons—sluts of the sky). The male birds made more money, just like they do now, and they never let you forget it. Polkadot Polly had no time for it, though. One time a pomeroy (extinct bird, not missed) walked up and deigned to spray Polkadot Polly with his “scent”—something bodily, intimate, and entirely inappropriate. No one saw what happened next because there was so much noise and bright light, as if conjured from thin air, and what everyone remembers next is this pomeroy with his genitals hanging out, exposed, cut entirely to pieces, destroyed, but still hanging on, still a part of his body. He cried and cried, but no one asked questions.

Other times, Polkadot Polly could be quite a prick to friends like me. Often she wouldn’t respond to my calls in the night, and when given gifts, she’d shrug and immediately judge you and your present. “Oh, another leaf. How exciting.” She was no more thrilled with the nest I got her the last holiday I spent in the jungle. “Why are you giving me this? Why, Monica? I am not going to have children. NO! Those birds are EVIL and I am the God of my own life. I will not die trying to protect someone even more helpless and sensitive than me.” She cried, a single tear. She didn’t break composure. She didn’t back down. I never saw her again.

But before I left I told her, that night, the real reason I got her that nest. “I want you to be happy, and I only want you to know I love you. Now you will have extra room at night, you can put as much bedding and feathers in there as you want.” Polkadot Polly shook her head and rolled her eyes at me. “And what? Hide from the world?” I looked at her straight and said, “That sounds like that’s what you want to do, and you’re doing a pretty good job of it, Polly.”

She broke down in my arms and promised to come back to the coast with me when she could, in a year. She never did. But I know she tried.