Ottessa Moshfegh’s Death in Her Hands is a taut critique of true crime entertainment’s effect on American culture. 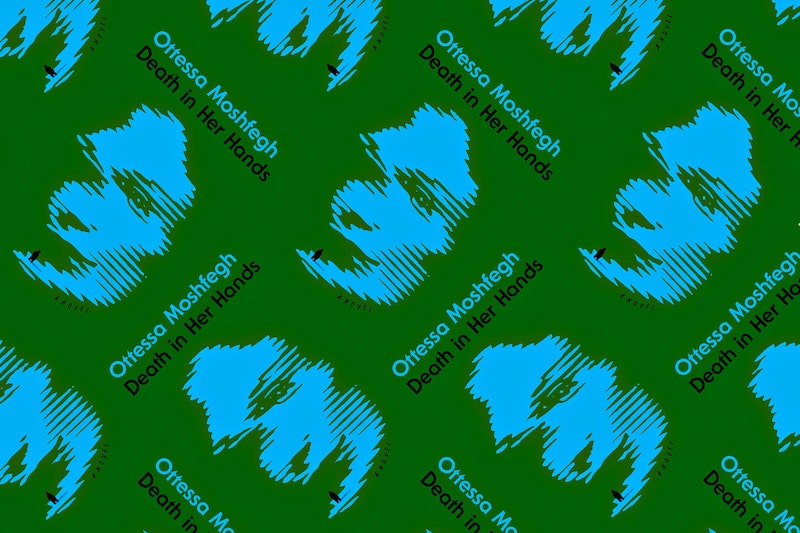 I’m immediately endeared to someone with this kind of relationship with their work: approaching the end of writing the short story collection Homesick for Another World in the spring of 2015, Ottessa Moshfegh didn’t want to finish. As she told The New York Times in February: “‘It was almost like someone had died when I finished that book… My future was so terrifying,’ she said, 'I needed to write something to get me onto the other side of an experience.’ So she forced her mind into the present using a strict regimen: She’d get down 1,000 words a day, without looking back, ‘until I’d reached the conclusion of something.’”

Death in Her Hands may be five years old, but it’s not lacking “the Moshfegh high style” as Jessica Luhrman suggests in her review. Moshfegh had just finished Homesick for Another World, her best book, and fought the depression of losing it to completion by writing another book. Vesta Gul could’ve been scooped out of one of those short stories, many as “plain” as the prose of Death in Her Hands. Maybe “plain” just means “polite.” Vesta Gul is not foul-mouthed, bratty, or misanthropic, unlike the protagonists of her previous two novels. She’s a “plain” person with small prejudices (a child of immigrants, widower of a German, she regards the lumpenproletariat of Levant as lower than animals) and eccentricities that don’t amount to much, and it’s this “uselessness” that drives the novel. Vesta Gul has no one, so she goes deeper and deeper into her head, her “mindspace,” where the mystery of her life is much more interesting and dangerous.

While reading Death in Her Hands, I was convinced it was an indictment of Serial and other immensely popular true crime podcasts and TV shows that have become abundant in the last six years. Go on NextDoor or Citizen, and you won’t have to try hard to find some scared white woman calling the police on a black guy walking down the street, doing nothing (or now, the constant fireworks and “WEAR YOU MASKS!” posts). They are vile sites of false community alerting others of power outages, holiday fairs, and the bigoted ramblings of Dear John down the street, or the sudden interest in conspiracies theories by Jane Q. across the way. Right now, millions of people feel like Vesta Gul: anxious and alone in their mindspace. Vesta’s life after the death of her husband Walter resembles the routine of many people with nothing to do in quarantine: some reading, some careful shopping, camaraderie with pets (her dog Charlie is Vesta’s only other significant relationship, acquired after Walter’s death).

One day while walking with Charlie, she finds a note neatly laid out in the dirt framed by stones. “Her name was Magda. Nobody will ever know who killed her. It wasn’t me. Here is her dead body.” But there is no body, no killer, and no Magda. This note, the opening lines of the novel, form the basis of everything that follows. Vesta invents an entire life story for Magda, the daughter she never had: rebellious, sarcastic, but essentially good-hearted and street smart. Her boyfriend and possible killer, Blake, is more of a shithead but basically decent—for a teenage boy. And then there’s Ghod, the true villain. He’s the one doing all of this.

Throughout Death in Her Hands, Moshfegh careens into Vesta’s head and stays there for pages and pages at a time, and about half of the book is made of up of Vesta’s imagination and creation of the story of this missing dead girl. It isn’t long before she takes up sleuthing, and of course a 72-year-old widow living alone in a desiccated Rust Belt town surrounded by people she hates and doesn’t even know, is going to get in a lot of trouble when she tries something new and dangerous for the first time. Vesta’s quest leads her to various people and places she assigns the proper names to, including Shirley, “Magda’s mother” (really just someone she gave a ride home from the library). When they arrive at “Shirley’s” house, she introduces her son as “Blake.” More manifestations of Vesta’s imagination pop up, but this world never fractures or splits open.

Vesta’s sleepless sleuthing and single-minded pursuit of a purpose lead her to realize how much of her life was wasted with a philandering, emotionally abusive and unsupportive husband—and, sadly, make her neglect the only thing she cared about in the last year, her dog Charlie. After leaving him home alone one night after doing “research” at the library (filling out a mystery writer’s questionnaire on the Internet), she comes home late to find her dog missing. Vesta isn’t nearly as distraught as one would imagine, and in these short shards of honesty, Moshfegh lays out how ambivalent about everything Vesta is, from her life to the way her late husband treated her to the condition of her dog.

Moshfegh expressed sympathy for Vesta in the interview linked above: “She’s just trying so hard.” And she is, but Moshfegh’s essential misanthropy and fatalism are on glorious display here. This is a very common woman, someone who got married young in the middle of the 20th century in America and never looked back. Walter didn’t want kids, so they didn’t have any. Walter didn’t encourage or care for his wife at all. And it took her half a century to realize that, and through Death in Her Hands, we see Vesta realize how much shit she took for absolutely nothing.

And what does all of this enterprising, feminist can-do spirit lead to? Charlie runs away, and after encountering more “real” characters from her “mindspace” in real life, she comes back home to find Charlie nearly feral. It’s not clear if he’s rabid or simply furious at Vesta for leaving him alone for the longest period of his life. He jumps at her neck and she sticks him with a kitchen knife. After killing her own dog in self-defense, Vesta Gul goes out into the forest and disappears forever. There will be no body.

Death in Her Hands will likely be regarded as a minor work, a perception no doubt furthered by its “writing exercise” origins. But despite being five years old and only accidentally topical, Death in Her Hands is another great Moshfegh book, whether it’s explicitly about true crime podcasts and the bored suburban women who develop anxiety disorders from listening to too much of them. Vesta’s monomania and arrogance (she thinks the police are “in on it”) are an indictment of American individualism. What does Vesta’s detective work and initiative get her? A dead dog. The story and writing are too warm, not nearly as caustic as the ice queen at the center of My Year of Rest and Relaxation. Moshfegh remains America’s best contemporary fiction writer, and no one’s even in the same building as her.