A review of Contempt of Gravity. 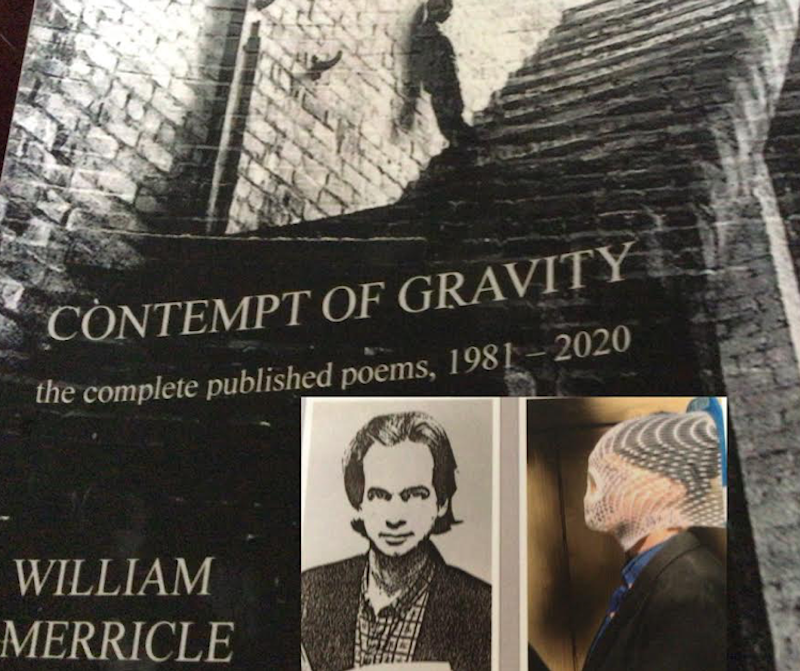 I first met poet William Merricle another lifetime ago. It was 1980s Baltimore, and the local poetry scene was at its peak. Looking back, it jumped and bellowed like a beast on fire with art, spoken word events, performance art, and weekly open readings. An exciting renaissance put Baltimore on the radar. A thriving hotbed mecca for poetry, music, and underground alternatives to stodgy pompous academia. This culture shift lured creative people from everywhere to my old hometown. Tinytown became a mega-verse in the poetic paradise of words, musical sounds, and visual images. Punk and experimental theater were all the rage.

In the middle of this urban vortex, I discovered William Merricle's rare, raw talents through Baltimore's own late great-granddaddy poet laureate Chris Toll. During those frantic years, Chris was the unofficial mayor of all things poetic in Tinytown. Maybe a blessed curse since poetics and politics aren't a winning combo. Instead, they exist in weird tandem, within lively art scenes everywhere. I'm not sure if William came to Baltimore by an invitation from Chris or was drawn there by the magnetic lure that pulled many to check out all the commotion unfolding. Merricle, a native of Lima, Ohio, shares a common bond from the Midwest rust belt to the east coast steel mills. Obsolete byproducts of metal industrial psyches of those ancient times. Now, like those heavy days, a mere distant reminder of hard-drinking working-class city environs we hailed.

The recent publication from Cleveland’s Crisis Chronicles Press, Contempt of Gravity, combines Merricle's extensive works spanning four decades with the content of a dozen of his titles and chapbooks published along the way to unveil this new, hefty compilation. The back cover blurb reads: "William Merricle was once the assistant manager of a ramshackle soft-porn movie palace. He would open the observation window and glide paper airplanes inscribed with quotes from Heidegger over the engrossed congregants below."

The works contained in Contempt of Gravity span more than mere years. They're a testament to the free spirit that runs the radical risks of a classical loner bearing his soul, Touching on classic themes like love or the lack thereof to the truth of death, its conclusion, and the final war within a battle without victors. The essence of Merricle's words is self-reflected in many facets of form and style. From the short and sweet poems like:

ALL POEMS ARE FAILURES

Just one of your pussy atoms

Don't think of this as goodbye

I once read a proverb that said

Everyone has three hearts.

Someone else must have six.

I have no idea

How to fill this space.

Whatever your tastes, Merricle has the menu choices for every poetry pallet and gumption to prove it. Read between, above, and under the lines. He serves up a lifetime of options, his and yours. In a recent communication with Merricle, he wrote about his journey to Baltimore. He says: "I have fond memories of my visits to Charm City. I especially enjoyed my stays at the Riley House and hanging out with that pack of scoundrels. That includes you, buster. I recall paying close attention watching you do that voodoo that you do so well—also great memories of the readings I delivered. When I first started visiting Baltimore, Chris Toll took me under all six of his wings, and we became fast friends, becoming proficient in welding the slings and arrows of outrageous fortune. He came to one of my readings in Columbus shortly before he died. I'll always miss him. I'm 69 years old. I was born and live in Lima, Ohio. I became active in the poetry communities in Columbus and Toledo In the 1980s, then later in Cleveland and Baltimore. I make it a daily discipline to practice mindfulness, heartfulness, spleenfulness, sinfulness, foxiness, wistfulness, dreamfulness, forgetfulness, and Eliot Ness—all the important nesses. I strive to make every poem an alchemical encryption device, transforming poetry into silence and back again."

I can attest to him doing precisely that after reading Contempt of Gravity and looking forward to his next offering. In addition, I posed the question from one poet to another. Why? What does poetry do for you? Has it all been worth it? He replied: "I think of poetry as the closest thing to religion I'll ever know. It has charmed, charged, and changed me, and always will. It's the only thing that has kept me going all these years, and I wouldn’t be here if I couldn't write it. So if my life has been worth living, then my poetry has been worth writing. Much more blessing than curse for me. I've taught a course or two on infamy, but I think those days and nights are behind me. I'm as obscure as I want to be, since I've seen the dangers in pursuing and achieving fame. That shit will kill you."