It’s a mad, mad world, so go fuck yourself if you’re not on my side. 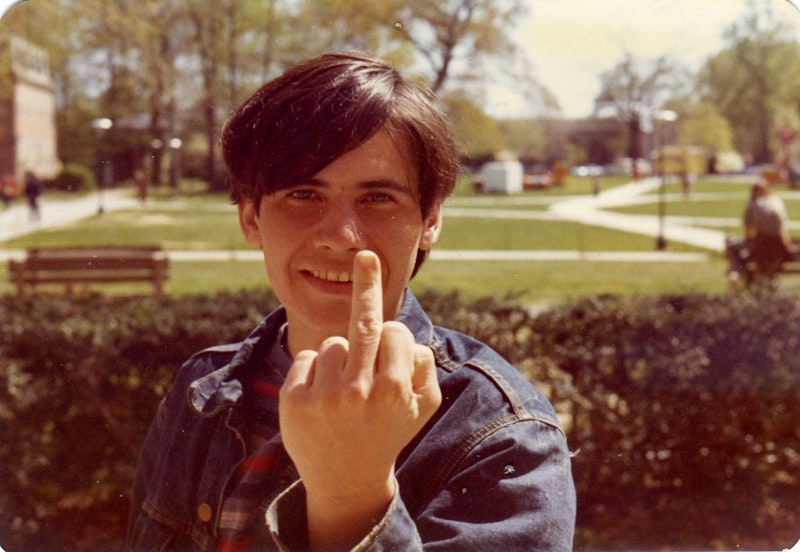 I’ve no idea what Donald Trump’s Dr. Feelgood/Dr. Robert is feeding, or injecting, the President with, but man, keep that shit locked away. Trump’s boasted over the course of his too-long public life that he’s never had a drink, smoked pot or cigarettes. Perhaps coffee’s on that list too, it’s hard to remember. But of course his personality’s regularly altered by some drug—maybe steroids, amphetamines, or a designer tablet that’s yet to hit the mainstream—since he apparently gets little sleep and turns cranky if his Diet Coke doesn’t have exactly seven ice cubes. Some on the left, feigning a tone of “more in sorrow than anger” say that Trump’s a victim of dementia or another cruel disease, and the 25th Amendment ought to be invoked to drive him from office. That may happen—although given Trump’s uncanny ability to survive politically, probably not—and then the country will be led by 19th-century moral evangelist Mike Pence. Cool! Could be a case of the cure being worse than the disease.

The media’s throwing a tantrum currently about Trump’s weird (and possibly masterful) use of Twitter, although few reporters and commentators will admit that if he stops tweeting it’ll be a lot less fun for them. Like most of what’s prominent on social media, it’s a lot of noise, and very hard to follow. Has Bill Maher been fired yet? Jeff Sessions leaving D.C. on a jet plane? Kathy Griffin in leg chains? Joe & Mika still sweet on each other? The Doors’ re-mastered first album from 50 years ago released yet? Is Wonder Woman still raking in bucks at movie theaters? Are we at war with North Korea yet? What’s on the menu for your James Comey party? Beats me, it’s all too sludgy. What does come across is that a small segment of the American population is pissed off, flipping the bird indiscriminately (unlike my college friend, pictured above, in 1974, buoyant after completing a difficult German mid-term) at anyone who looks at them with an arched eyebrow.

On Tuesday, a Wall Street Journal editorial gave Trump 20 lashes with a hickory switch, concluding, “[T]he most effective opponent of the Trump presidency is Donald J. Trump.” Hard to argue (and you have to wonder what the beleaguered Jared Kushner is thinking these days, with a wacky father-in-law running his life, and nothing in his pre-nup that includes an escape clause from his miniaturized world), but while the Journal slaps Trump silly for his wanton tweeting, gratuitous insults to London mayor Sadiq Khan (who’s no prize), and his own staff, the writer sneaks in his/her correct, in my view, opposition to Trump’s nativism. The key paragraph: “Mr. Trump is also sabotaging the legitimate legal basis for the travel ban, and the stakes are bigger than the ban itself, which we think is counterproductive and unnecessary. He is exercising core presidential powers over foreign affairs that the courts may restrict if Mr. Trump keeps daring them to do so.”

But that’s good news! The less Trump can act on his xenophobia the better for the country. As I’ve noted previously, paralysis of government, especially when the executive and legislative branches are filled with ideologues, is not a cause for alarm.

And in this whirlwind of political commentary, thank the Lord for The New York Times’ Charles Blow to provide comic relief. Earlier this week, Blow took to his op-ed pulpit and declared: “My whole life I have taken for granted America’s leadership in the world. America’s might and majesty were cornerstones of international relations, cooperation and diplomacy. We were a beacon and balance to the world… Well, that time has come to a close. America is exiting the world stage. Donald Trump is drawing the curtains.”

We’re apparently headed to third-word status, Blow says, not just because of Trump’s tweets, but far more importantly, the President’s withdrawal from the toothless, let’s-pat-ourselves-on-the-back Paris climate accord. That’s five sacks of malarkey there, since the treaty is largely symbolic, not unlike any edict the antiquated United Nations puts forth, since no country needs an honorary ribbon to address environmental concerns. (And isn’t it about time to move the U.N. from Manhattan to Brussels and convert it into condos?) It’s true that world leaders (and the media outlets in their countries) love ridiculing Trump, but has America really receded into irrelevancy? And was it considered a “beacon” when President Bush invaded Iraq, which led to Barack Obama’s apology tour, or when LBJ and Nixon continued a pointless war in Vietnam? Bay of Pigs, anyone, or Bill Clinton’s refusal of Syria’s offer to hand over Osama bin Laden in 1996 on alleged legal grounds? Reagan’s refusal to even say the word “AIDS”? Jimmy Carter’s entire administration?

If Jeremy Corbyn, noted anti-Semite, is improbably thrust to 10 Downing Street in Thursday’s UK snap election, I wonder if Blow will similarly downgrade the leadership coming from London.

As my friend Crispin Sartwell wrote on Monday, Twitter isn’t much of a forum to change minds. Like Facebook, it’s a self-congratulatory outlet—Today We Are All Mancunians—that’s easier, say, than organizing 10,000 strong to picket the White House every day. Say Trump’s a Cheeto Slime, or, Man of the People, and then ask if anyone has a spare Of Montreal ticket, or solicit prayers for an ailing cat. And that concludes what was once the Seven O’clock News.