Lubomyr Husar failed as a man of God. 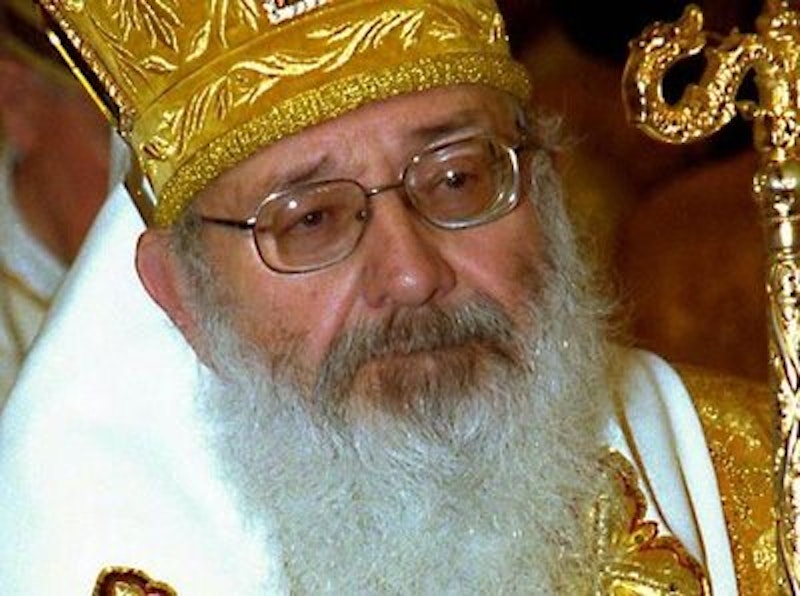 The general reader won’t know who Husar is, but Russian Orthodox believers will remember this cleric, the Cardinal of the Ukrainian Greek Catholic Church (UGCC), as one of their antagonists. He worked relentlessly throughout his life towards the emergence of the geopolitical perversion that is an independent Little Russia (what Husar would have tendentiously called “Ukraine”). When that perversion did emerge, he was among its dubious “heroes.” He was an icon of a benighted people.

Husar defied by his very existence what Professor Daniel Larison and other significant American Russian Orthodox theologians have described as the ancient cultural unity of the Great Russian and Little Russian peoples. Until the dismal year of 1991, his church was active in sometimes underground resistance to Russia’s, and the Moscow Patriarchate’s, natural hegemony over Little Russia. Given that fact, it shouldn’t be surprising, even though it’s shocking, that the UGCC never even attempted to fulfill its pastoral duty.

This pastoral duty, from a Russian Orthodox perspective, was to disappear—yes, disappear from the face of the earth—but not before encouraging its Little Russian faithful to cast aside their pride, not to mention their aspirations to their own language, their own culture, and their own dignity, and return in penitence to the stern discipline of Great Russian authority.

You’ll hear the Russian Orthodox faithful abuse Husar in no uncertain terms as a scoundrel, a Nazi collaborator, a homosexual fornicator, and a pawn of global fascisto-Zionism. At our small Russian Orthodox mission church here in Indiana, Father Nicodemus preached along those lines just this past Sunday. He took as his text this article from a neoconservative magazine, in which a certain George Weigel fawns over Husar.

But I’m not interested in the more lurid accusations against Husar. To me, he was more to be pitied than hated. He failed as a man of God, and he misapprehended what the Little Russians—at their core, a simple, cheerful, southern country folk—needed, as opposed to thought they wanted. Let us not judge him, for at the moment he is being judged by God, who, we must hope, will have mercy on his soul.

The season of short pants is upon us! How fine.

You might object that it’s rather the season of wonderful manly sandals. But then, I wear sandals all year, in the boreal months adding one of my three pairs of thick woolen socks, which Mother knits herself. So it’s short pants that mark, as far as I’m concerned, summer’s arrival.

I have several pairs of favored short pants. All are khaki, with numerous useful pockets, and if each pair is a bit tight, that’s how I prefer them.

Each pair falls to a different point on my upper thigh. A first pair, the longest of all, is best suited to farm work here at our homestead. They protect the tender skin of my upper thigh from the chafing of the tractor seat; their thick twill, Lands End’s finest, keeps briars and nettles away from wiggling testicles.

A shorter pair I reserve for the calisthenics I do with Brother Aiden in our homestead’s common room. Up down, one two, up down—and so forth, swinging our arms lustily in unison. Sometimes Brother Aiden and I go so far as to do isometric push-pull exercises, holding each other firmly by the hand.

The shortest pair I reserve for moments of pure leisure. I put them on before I take my weekly drive to sit outside the playground of our local elementary school. There I recline on the bench, alternately reading in the letters of Tolstoy and enjoying the charming gambols of the little boys and girls.

These are also my shorts for haunting the batting cage at the county rec center. Somehow their very shortness makes them appropriate for watching sport; I feel strong and ever so slightly exposed in them, much like a spectacularly formed high school wrestler, posed in the center of the mat before his match starts, basking in the admiration of the crowd.

Yes, the season of khaki shorts is upon us! O, welcome high summer!

I am, by the way, still looking into Brother Aiden’s claim that the estimable Christopher Caldwell has been co-opted by the Jews. I hope to have clarity on this matter soon.