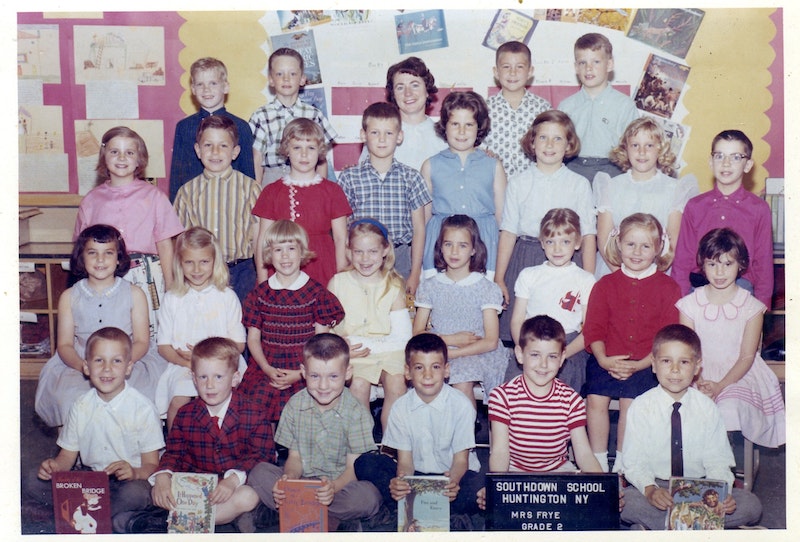 A question that’s periodically floated on social media sites is “As a child what was the first big news event that you remember clearly?” I took some comfort when I asked my friend Rick, a couple of years my senior, for his response and it was a rapid and unequivocal “Sputnik. 1957. I was four.” Hell of a memory if you ask me, since when I was four everything’s a blur. We both cited JFK’s election in 1960, although that’s kind of chintzy—despite the New Frontier jazz, torch passed, and contemporaneous celebration of The Pepsi Generation—since it was, after all, a quadrennial presidential election. Anyways, Rick picking Sputnik put a spring in my step, and I temporarily forgot all the younger people who chose the Challenger disaster, Monica Lewinsky, or 9/11.

My own answer is the Cuban Missile Crisis in October of 1962, a frightening two weeks that, in my seven-year-old mind, made the perfunctory daily air raid shelter drills at elementary school seem a bit more sensible. (The memory is amped up slightly because of this current business with North Korea and blustery Trump, as my son Nicky recently wrote about.) What sticks out most from that month was the day of October 25, my brother Gary’s 12th birthday, a more muted blowing out the candles hoopla than usual, as my parents were clearly distracted. Before I hit the sack that night, I overheard them talking softly, and Mom asking Dad, “You think we’re dead ducks?” As usual, he was calm and said no, it didn’t make sense for us or the Reds, but I didn’t dig it. At all. I didn’t articulate it quite this way as a tot, but my thinking was gee whiz, I’m seven fucking years old and it’s all over?

The school picture above, my second-grade class at Southdown Elementary in Huntington, New York, was taken around that time and our teacher, Mrs. Frye, a sweetie, certainly didn’t discuss the Kennedy brothers, Nikita Khrushchev, and Cuba with us, but I’d assume there was plenty of gloomy chatter in whatever room the grown-ups assembled to drink coffee and smoke cigarettes.

I look at this picture (I’m in the front row, third from the left) and can reel off the names of about half the class, the rest lost to obscurity. There’s Bobby Walton (front row, first on the left), a great guy who I hung out with through high school, our pursuits shifting from trading baseball cards to playing pick-up touch football to, by ninth grade, buying nickel bags of dope (one of the names for marijuana then) together. I haven’t seen Bobby since 1976 or so, although we did trade letters, the most recent an email in 2005 when he was working on Wall Street. After the crash in ’08 I tried to contact him for his take, but the email address was now invalid. Like a lot of my friends, both from Huntington and college in Baltimore, his firm was apparently a casualty of that humdinger of a Las Vegas-style financial nightmare. A smart fellow, I have every confidence (and hope) he landed on his feet.

Then there’s Bruce Arbonies (first row, second from the right, front row), who lived on Preston St. in a house that was a two-minute walk through the woods from own LaRue Dr. home. “Arbs,” as he was called by friends, was a terrific fellow, with amiable parents and a really nice older brother. Once, in 10th grade, he and I went to some kid’s party, and Arbs pointed out that he wasn’t wearing an undershirt, since “I hear some really fast chicks will be there and I want to be ready.” He and I were also Boy Scouts together, so I guess he took the “Be Prepared” motto to heart, although as it turned out, not much happened on that score, so to speak, although we did get kind of loaded on cans of Rheingold beer.

As I said, Arbs was a buddy, no mean bones in that body, but he took an odd turn for the serious after his first year in college, a school somewhere upstate as I remember. I was in Huntington for a long weekend in the summer of ’74 and my lifelong friend Howie Nadjari and I arranged to meet Arbs for dinner and compare college notes. Bruce had made reservations at a semi-fancy spot downtown on New York Ave., and greeted us with handshakes and some surprisingly sober chit-chat about current events.

Howie and I ordered beers while Bruce bowled us over by consuming a couple of Manhattans. I looked at Howie, incredulous, and we mutually expressed through arched eyebrows, what, is this 1954? And when did Bruce turn 35? It was bizarre—although nothing really to criticize—and I’d guess he was taking his business classes to heart. Towards the end of the meal, a bit tipsy, he did inquire about “the girls” at Johns Hopkins, and when Howie stretched the truth by saying something like, in a Fred Flintstone voice, “Oh yeah, hubba-hubba, lots of action,” Bruce gave a thin smile and soon after we called it a night.

I was still thinking about how weird the dinner was when Howie and I joined a bunch of other high school friends for more drinking, toking, and skinny-dipping at the pool of some family on vacation, relating it all to Bobby Ringler (second from left, second row from the top), who was equally baffled. By three a.m., out of my skull, I crashed at Bobby’s house, and embarrassingly left a calling card of two puddles of puke in the guest bedroom, which I tried to clean up, badly, but his parents, paragons of discretion, made no mention of it as I made my goodbyes and got on the LIRR back to the city.

In the picture, I also see Bruce Humm, Cathy Baum, Barbara Raskin, Jean Melrose, and a cool kid named Edgar Scudder, who went by the nickname “Pit” (never got the story on how that came about, but a name like Edgar does need some gussying up) who lived about a block away from Mill Dam Park, where we played Little League. I liked Pit a lot, and hung out with him many times during elementary school. And then he was gone: moved to another state, another country, who knows, but that was the last I saw of him. I hope he’s a content multi-millionaire living the high life somewhere on Italy’s Amalfi Coast.