Another End to the End of the World 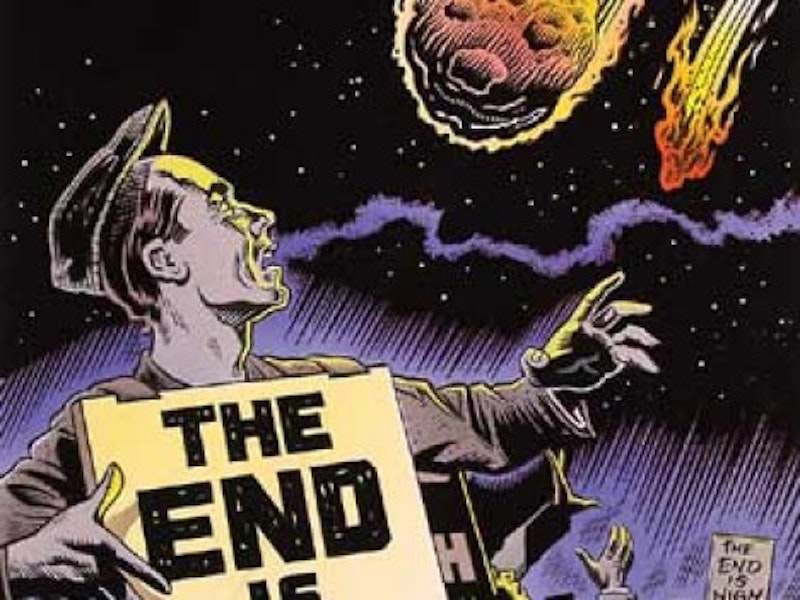 I’m told to be relevant I should write more poetry
About the end of the world,
Clever lines addressing the bigotry,
Narcissism, cruelty, and greed—
All fires stoked by rampant ego—
Words for the painful end to our species.
So okay, I said, I’m not very popular,
I’ll give it a try, I want to be part of things,
Even if my part applauds the end of things.

But have you ever tried to write a poem
About the end of the world?
It’s actually quite distracting:
The bullets, the barbs, the entertainment value
Required to sell it. It’s hard
To get a good line in edgewise.
You have to pay attention to what’s going on,
But what’s going on gets worse for watching it.
Still, you don’t want to miss anything.

Of course, as soon as you capture an emotion,
A movement in the gestalt of groups, subgroups
And bickering sub agendas—its obsolete!
The moment you comment on any event,
It’s forgotten in the onslaught of sub-events
Wrought in feedback and imitation, in fact,
That’s probably the gist of the end of the world,
That it’s just too fast, reason loses out to chaos,
And the pundit must settle for profit instead.

Still, I tried to buy in, as they say:
See, if poetry is punditry and punditry is profit,
I took stock in social media
In order to profit off the decay of the mind.
I used organic paper for my brick & mortar verse
Because I wanted a hedge against the myth of complicity.
I weighed in on issues daily,
But the weighing in caused more issues.
New products, new media had to be created.

And all that competition, what the hell?
Everybody’s trying to do what everybody wants to do.
Even friends want to beat you to it, beat you at the game
There’s a prize supposedly
That’s greater than friendship, greater than dignity.
Look in the towering windows of the cities—
They’re all writing poems, making movies,
Trying to capture the end of the world
In their unique but marketable way.

Maybe we’re all just feeding the beast,
Trying to be popular or trying to get laid—
Simple desires really.
Fame feeds the flames in this romantic age,
But what romantic poet does not treasure
The image of themselves writing
Their last so-prescient “I told you so” lines.
While their desks are engulfed in a haze
Of tear gas and radioactive mist.

Maybe the real reason it’s so hard
To write a perfect poem about the end of the world,
Is that no matter what you put down,
No matter how well-crafted or emotionally honest,
If your poem is true to the moment,
If the end is imminent, then
There’s no time or reason to be published—
No one will ever read it,
The tree falls in the forest without acclaim.

So turn on your computer—
Track the mayhem or watch the YouTube,
For videos of people getting shot in the street.
Or join an internet game and train for future combat.
Take a business class in branding;
Be a marketing agent for the end.
The prophetic pen is too hot to pick up anyway,
Might as well play in the testament flames,
Another plastic soldier melting in the rain.