Our Distinction from Nature

Pat Steir at the Barnes Foundation. 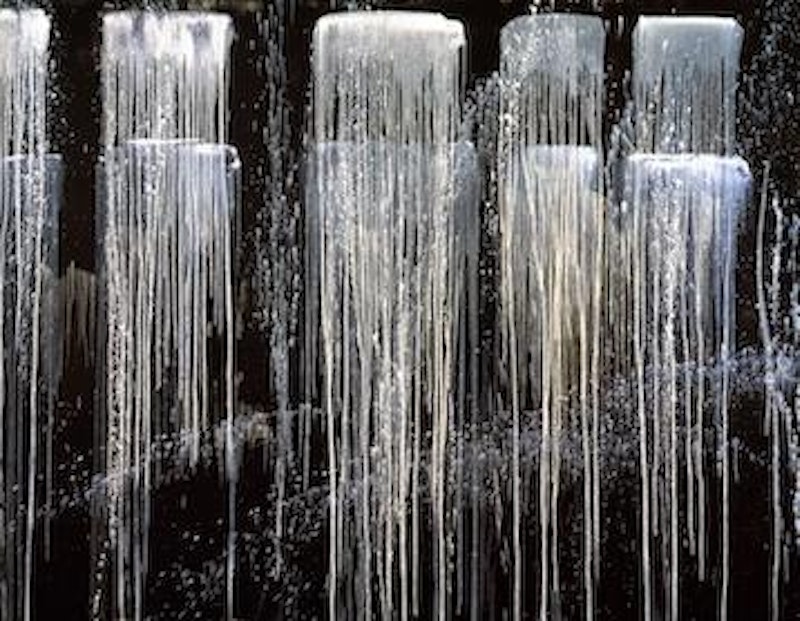 Consciousness is often held to be what is most distinctive of human beings; it's what we have in common with God, or it's a culminating achievement of evolution: creatures with the ability to know themselves and their world in a way that (other) animals can’t. Above all, consciousness separates us from the order of nature, and many thinkers have celebrated it precisely on that basis. For René Descartes or G.W.F. Hegel, consciousness and self-consciousness show that we are not bodies in a physical world at all, but spirits sequestered for a time on the material plane. For them, as for many of us, human actions are contrasted with natural events, on the grounds that people are aware of the objects around us and of ourselves among those objects, and always about the business of using the world to realize our purposes. Events in nature, unlike human actions, are spontaneous, unplanned, unconscious: that is, "natural."

These philosophers thought that our distinction from nature is what makes us meaningful, valuable, human, and that idea perhaps represents the dominant religious and philosophical heritage of Europe. But the idea that we are separate from and higher than nature and that it's there to serve our conscious purposes is slippery. It's a premonition of racial and gender oppression, for example, as women and people of color come to be viewed as more embodied or more natural than European men. More importantly for present purposes, excessive or obsessive consciousness, too much intention, can be a burden, or it can be obsessive or delusory. That's why all the great artists of the 20th century were in psychoanalysis. It didn't help much.

That too much consciousness is a burden, and a barrier between self and world, was one of the great themes of the arts in New York, circa 1950s through the 1970s. People like John Cage and Yvonne Rainer studied Zen Buddhism as a way to try to offload the Western inheritance of excessive consciousness, tried to find systems in which the artist made things in the way nature makes things: just as it happens, by apparent chance, without the distorting or falsifying lens of awareness. They wanted to participate in the way things make themselves, not seize them and transform them in the service of their own ego. They wanted, we might say, to be nature.

One of the most profound expressions of this impulse has been the art of Pat Steir, and in particular her "waterfall" paintings beginning in the 1970s, in which she spreads very dilute pigment across the top of the canvas in a quick spontaneous gesture. The paint then flows in drips and rivulets down the canvas. She may supplement this by throwing or splattering some paint or scribbling loops on the canvas as well. Her goal, as she expresses it, is to become part of the natural processes by which the world becomes, and also to produce objects or images whose power derives in part from her sense and the sense of the viewer that the work emerges both spontaneously and by necessity rather than by conscious decision.

She’s worked in this vein (though others as well) for decades now, and an excellent place to experience the result has been installed this month along two walls of the grand lobby of the Barnes Foundation in Philadelphia. Silent Secret Waterfalls: The Barnes Series consists of 11 monumental waterfall-and-splatter paintings in black and white. They are, like many of Steir's works, both rough and entirely finished or realized. They’re beautiful and absorbing. I wanted to spend a lot of time with them, approaching closely and moving away, finding elusive images and forms in them, following Steir's process into layers and diaphanous curtains of flowing paint. Colors seem to emerge. Vegetation. Cave forms and cliffs, forests and rain.

Steir created a stir when she appeared in the 1970s. Cage was a friend, for example, and she explicitly conceived her visual art as a complement to his music. "I realized that I didn’t have to use the brush, that I could simply pour the paint, that I could use nature to paint a picture of itself by pouring the paint," she told the Brooklyn Rail in 2011. "Gravity would paint my painting with me. I was influenced and inspired by John Cage, his idea of non-intention."

In some ways, her work in the 1970s and 80s was a throwback to the heroic New York abstraction of the 1950s, and then as now, you can't think about drips and splatter without thinking about Pollock. But by then the arch, hyper-conscious art of pop and conceptualism had long superseded abstract expressionism and Zen art. Steir's painting, however, looked nothing like Pollock's. It was a conceptual practice as well as abstract painting, and she’d absorbed the insights of minimalism as well. Her works don't look like Judd boxes, but they have the flavor of cutting to the essence.

This might account for the fact that she was somewhat less a presence after the 1970s: she didn't slot neatly into a school. It was hard to tell if her 70s work was cutting edge or a throwback, though perhaps she didn't care much about that. But Steir's reputation has undergone a revision, for a number of reasons. She's been around long enough now to be a feminist hero and progenitor of women's art, and furthermore her art has the quality of the macho art genius while also retaining a connection to female embodiment and lack of ego that’s a critique of the macho artist. Where once she might have seemed peripheral in various ways, she now seems central. If she ever seemed derivative, the distinctiveness of her practice throughout is obvious now, as she pushes 80.

Steir's work shows, however, how wickedly difficult, or impossible, or contradictory is her attempt to throw off her conscious agency and become a natural process. This is a problem not only for Steir. It was a problem for John Cage. Perhaps it’s a paradox that lurks underneath Taoism and Zen Buddhism, but it’s definitely a problem for their Western practitioners. The idea is that we’re going to let consciousness go by a conscious decision. We're going to let go of our goals: in fact, that’s our goal. By conscious decision, we’ll become unconscious nature; we intend to let go of intentions. And we intend to do that for a specific reason: to find inner peace, perhaps, or to make great art. It's like an anti-technological technology, or a machine bent on destroying all machines.

Though they do have a spontaneous quality, the silent secret waterfalls at the Barnes are also, obviously, hyper-consciously made. The resolution to welcome the results of chance is itself a decision. The results in each case really are very composed; they display all sorts of symmetries and systems. The canvases, as becomes more evident the more time you spend with them, are very worked, the paint layered, and I have the suspicion that Steir kept working at them until they looked right to her or achieved the sort of effect that she intended all along. I also have the feeling that in producing a series like this, Steir may have made many false starts. I don’t believe that any drips and splatters will do, because there’s something very perfect about her drips and splatters.

Though the silent secret waterfalls do convey a sort of spontaneity, they also display a sense of mastery. They appear finally not to be the products of nature playing or improvising but of a very long systematic art/craft practice. In some ways, that is, they contradict what Steir takes to be their point. Unlike the works of nature, they have a particular style; they emerge from a particular idiosyncratic consciousness making artistic decisions.

This is a very human dilemma, or at least it's one I have felt my whole life. I feel too intensely conscious; I feel myself to suffer from consciousness, and I experience it at times as barrier between myself and the world and myself and other people. So I take various steps to ameliorate it, hush it up, or even erase it. I've tried substance abuse of various sorts, for example, and I tried Taoism and Zen Buddhism. That is what those things mean in the West, and especially what they meant in New York circa 1950 (when D. T. Suzuki arrived at Columbia) to 1980, when Steir was reaching an aesthetic pinnacle. But these are conscious attempts to cure consciousness, ways of letting go of all goals with specific goals in mind. They exacerbate the problem they’re trying to cure. Far from showing a way out of the dilemma, they double it over or remove it to the meta level. They make consciousness an irremediable condition.