Hapless circumstances eliminate class lines during a photographic trip through Mexico. With photos by the author. 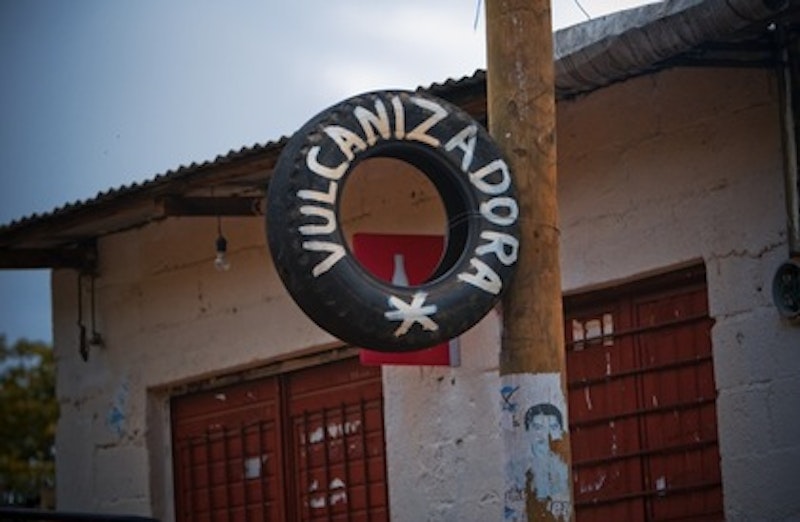 The painted sign for a Vulcanizadora, a local Mexican tire repair store.

This is the third and final essay in Forest Casey's Mexico travelogue series. Go back to read Part 1 and Part 2.

Goddamnit, we were happy.

My uncle and I were finally leaving the Sierra Madre mountains, finally giving up the fight against gravity and letting Manuel, our 4-door Korean econobox, coast.

For the last untold number of hours, we were stranded in Simojovel, straining the transmission up and down the dirt one-ways, trying to find our way out to the next town. Part of the problem was our map—we still didn't have one. Almost a week in and we were still following the very small, very inaccurate map inserted between pages 664 and 665 of last year's Lonely Planet guide.

As you might imagine, this wasn't going well. Especially when we figured out that Simojovel was a town with a very lovely entrance and no exit.

It must have been an hour driving through the mountains to reach Simojovel and at least an hour trying to find our way out. Three more hours wasted behind the overflowing busses, sweating through road construction, always dead at 30 miles per hour and always running out of gas. And now we were running out of daylight. But, we didn't want to think about that. We were out of the mountains. We were happy, goddamnit.

Aside from a small stretch between Palenque and Agua Azul, I occupied the passenger's seat, doing my part to guess at directions and keep the conversation afloat. In turn, my uncle fought with the steering wheel, fought with the manual transmission, fought to keep the two of us out of a ditch and, because of all the fighting, fought to keep a cool head. I suppose I was getting the easier share of the workload.

Actually, it was worse than that. I spent an annoying amount of time in the front seat, camera in hand, my telephoto lens blocking my uncle's view of the road, straining to take photographs of the continuous explosion of color and form and shape and life that was happening for the split second we were driving by, never to be seen in exactly that way again. So, naturally, I had to capture it. Naturally, I had to be annoying.

But, as we pulled into our 10th Pemex gas station to refuel, none of that mattered.  The need to capture every fleeting moment faded with the sun; my camera was safely tucked away in the trunk. We were safe; we were happy; we were full. It was the perfect time to break the rules again and drive off into the night. Only this time, I was behind the wheel.

We set off with an impressive slide from reverse to 1st, not too much on the throttle and no stalling. The headphone cable from my iPod swung between us, the right earbud in my ear, the left in my uncle's. Finally, we had music. Sure, we looked ridiculous, two thin men in a thin car with thin tires, but it was dark outside and you probably couldn't see that much anyways. I know I couldn't—it started to softly rain on the windshield.

I told my uncle he could play whatever song he wanted, I was content to finally be of some use on the trip, content that my uncle could finally stop fighting and rest. And I was more content when Pink Floyd's "Time" came through my single earbud, the volume too loud in the interest of rocking out.

Driving was fine, just fine, except for the massive truck in front of us and the lightening and the small, two-lane road that we were driving on. But it was fine—David Gimour was just getting to the guitar solo …

And then the crash happened. A thud so loud from the right side of the car that it couldn't have been just a pothole. It didn't feel like we just hit a pothole either; it felt like we hit a trench. The car was straining just to turn the wheels around. And now we had a flat tire. At night. In Mexico.

When I was a kid, I used to dream that all of the windows in my life were just television sets. The traveling back and forth between parents wasn't really travel at all. I would sit in the car for an hour or so while they changed the set, my parent's homes switching off every other weekend in an endless tide of custody visitation.

Of course, I figured out their secret. If I ever got up enough courage to open the door on one of the long and quiet car rides, I would see a black stage, my father making friends with all the crew members, or my mother directing the stagehands to plant the dogwood tree in the backyard to shade the swing set.

When we were driving street-by-street in Simojovel, trying to find a way out, when we were running out of gas in the Sierra Madre mountains, I thought of this. I thought of the two of us, impenetrable and air-conditioned, exploring from a distance, sometimes not even bothering to roll down the window before taking photos.

Now, with one flat tire, we were quite penetrable. Now, I had to get out of the car.

There was no blowout lane, no side of the road. A black VW, likely flattened by the same pothole, stopped dead in the right lane, orange safety reflectors already dispatched fore and aft. My uncle opened his door.

"It's both of them. They're both flat." I wanted him to be joking. He wasn't.

In under five minutes of driving, I managed to paralyze the entire right half of our car. Both cheap alloy rims were caved-in from the impact of the pothole. Now we would have to decide which tire to change; we only had one spare. Our Huyndai had to be front-wheel-drive, it just had to be.

There wasn't much time to think. The men from the VW had finished changing their tire and were now walking over to our car. My uncle and I tried quickly to think of a Spanish approximation for "Fix-A-Flat" in case they had some to spare. But before we could ask, they deflated their orange reflector, stuffed it in the trunk and drove off. We were alone again.

We had two flashlights, and both were flickering. My uncle balanced one in his teeth to change the tire. I waved the other one behind the car to warn the traffic coming on. The stars were out. The ornamental grasses on either side of the road swayed between the trucks. It was impossible to be detached now; we were outside.

And then my uncle called me back to the car. The tire was bolted down. We threw the tools and the two defeated tires in the hatchback and drove on, my uncle reclaiming his place at the wheel. The car started slowly, a long line of drivers growing behind our hazard lights, our back right wheel dragging reluctantly before them.

My uncle pressed on the accelerator, too much for comfort, as we drove through dark towns and over dark hills, the next one hopefully containing a Vulcanizadora, the small-town Mexican tire repairmen that dot the countryside, their telltale tractor trailer tire signage painted and hung from telephone poles. The next hill crested with no hope in sight. Now there was no more acceleration, only momentum.

We sailed up the next hill. In the distance, next to a bar, there stood the painted tire sign. I spotted it long before my uncle and yelled, thrilled to finally get something right. The Vulcanizadora's tin shack was closed, but the bar standing next door was still loud. We both hoped he was still inside.

The bar was loud but empty for a Saturday night. A lone couple danced next to an old electric jukebox producing an unlikely amount of bass. They stopped dancing long enough for us to shout for the Vulcanizadora over the music. They went to the back of the bar to get the proprietress who, in turn, woke up the Vulcanizadora, drunk and asleep from his Saturday revelry.

Dressed in a very clean Polo shirt, the Vulacizanadora shuffled through the parking lot, opened the front door of his shack with a flourish of keys, allowing the harsh lamplight and bugs access to his tools, his bed and his roommate, who was asleep on a cot at the edge of the dirt floor. He found a large sledgehammer and took to banging our bent rims into a circular submission. He couldn't have been older than 25.

I couldn't help but thinking that this was his one night away from the tin shack. Away from the rubber and the hammer and his one roommate, even if 'away' just meant 'next door'. Saturday night was his one night of culture and style, a night ended the minute two gringos pulled into the parking lot with their two flat tires. All hope for escapism vanished when the young Vulcanizadora took off his Polo shirt and got to work.

After a half hour of exasperation and sweat, the news wasn't good. During our drive, the ragged edge of the rim dug into our sinking tire, grating the rubber into a black, industrial powder and rendering the tire undrivable. The solution was to combine the one salvageable rim with the one tire we didn't destroy.

For his after-hours, overtime, half-asleep, mostly-drunk manual labor, the Vulcanizadora charged us about $5. This was a man who lived his life outside our car. A man who we never would have met until my clumsiness forced the car door open, exposing not a set or a stage but the Vulcanizadora himself, his Polo shirt still clean and his door open, just like mine.

A young boy follows his father to work near Simojovel in the Sierra Madre mountains.

The view from the passenger seat as the sun set over the Yucatan.

A man passed out near the entrance to Simojovel. Taken from inside our car.

Simojovel looked charming on first glance. Then we couldn't find our way out, endlessly retracing our steps back to this street.