Obsessive collectors always think of their belongings as museum-worthy, but the packrat gene doesn't always transfer from one generation to the next. 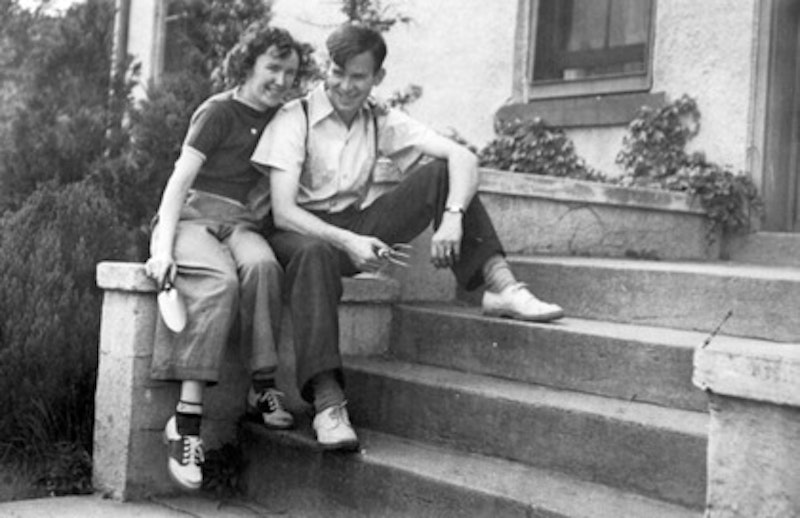 One of many family photos in the author's collection.

Not long ago I was having dinner with one of my older brothers and, as is often the case, we eventually dispensed with current events and got lost in family nostalgia. Our mother passed away 25 years ago and so the topic of her myriad eccentricities, both endearing and maddening, consumed the two of us, while a half dozen younger members of the Smith clan nattered on about God knows what.

There’s no scientific research I can cite, but it’s my bet that genetics play a part not just in medical predispositions, but habits as well. For example, this particular brother and I are both packrats like Mom, a quirk that eluded the remainder of the immediate family. My oldest brother, to take an extreme case, keeps almost nothing of sentimental value; he probably has about five or six photographs in his personal possession, while I’ve got boxes of them, including a stash of grainy black and whites of my parents from the 1930s when they were impossibly young and vibrant and just starting out as adults in the Bronx.

I made the case that my collection of pictures, European beer coasters, matchbooks, coins, old magazines—in my basement there’s a box of very early issues of Rolling Stone, including the back to back RIP covers of Janis Joplin and Jimi Hendrix from 1970—and the like wasn’t just a hobby, but something to pass down to the kids, in the hope that 50 years from now my descendants will be tickled to explore Americana artifacts from an earlier age. One trunk, for example, is stuffed with hundreds of letters from high school chums when we parted ways and went to different colleges. On rare occasions, I take a look at some of them, mostly hand-written missives that serve as a sort of diary, filled with the banal, embarrassing and sometimes rather prescient observations. It’s likely that upon my entry into eternity, they’ll be casually tossed in the trash by whoever has the task of sorting out all of my stuff, which would be a shame.

Another trunk is devoted to a collection of political campaign paraphernalia—buttons, posters and bumper stickers, the kind of standard material that used to be a staple of those seeking public office, from town supervisor to presidential candidates, but largely disappeared in the 1970s once television advertising rendered them obsolete. Included in this morass are the fruits of a project I undertook as a 12-year-old in the summer of 1967. I wrote to some 400 members of Congress, governors and even state senators, expressing my interest in their careers and, laying it on thick, wondering if they’d do me the honor of sending an autographed picture and maybe a campaign button or other remnant from a past campaign. Surprisingly, and to the chagrin of our mailman, the response was enormous, and I received all sorts of packages and letters. One was a lengthy letter from Rep. Gerald Ford, written in pen, praising me for civic responsibility and expressing the hope that I’d visit his office in Washington. I felt kind of fraudulent, since Ford was just a number on my hit list, but it was still pretty cool.

My mother got in the act as well, since she thought this was a worthwhile hobby (although her approval didn’t extend to supplying stamps for the letters, which I bought from the proceeds of mowing lawns and shoveling snow), and in the tumultuous summer of 1968, while on a Southern road trip with my dad, she stopped at a George Wallace headquarters, posed as a supporter—she was shameless—and walked away with fantastic booty. While in Georgia that July she brazenly rang the bell at Georgia Gov. Lester Maddox’s mansion and when his wife answered and they chatted, the result was an invitation for lunch inside with the couple. My father was a good sport—he admired but couldn’t believe the chutzpah of his wife, and ate silently while Maddox played banjo for them, autographed a vanity album of his speeches and traded political views with my mother. She grew silent when Maddox ranted about segregation and tried to change the subject to matters less repugnant, such as Civil War landmarks and the best spots in Georgia for peach cobbler and barbeque.

Unlike many obsessive collectors, I don’t care at all about the monetary value of what’s being stored, thinking that if you’re planning on making a killing of a first edition comic book, say, pristinely shrink-wrapped, a decade or two in the future, it doesn’t point to an abundance of financial acumen. This is a common misconception.

In a recent issue of The Weekly Standard Joseph Epstein, writing about his lack of hobbies, made this observation: “Many [of his peers] saved baseball cards, which, if in later life their wives didn’t insist they pitch them out, may well be worth vast sums today.” I’ve got about 1500 baseball cards, ranging from the late 40s to today (the combined stash of my brothers and me and my own kids), and it’s likely a dealer wouldn’t even shell out $300 for the lot. And why would he? Most of the cards are bent and beat-up, after being abused (as they should) during childhood games of “up against the wall,” “colors” and “match and de-match.” The fun is in looking at the cards today, how the Topps design changed over the years, the hairstyles of players and goofy uniforms.

Anyway, my brother, whose own house is splendidly decorated with framed family photos and other mementos from the past, disabused my grand notion with an exaggerated wave of his hand. “You’re just being naïve,” he said, “when your kids’ children and grandchildren come across your ‘treasures,’ if the stuff even survives various moves around the country, the 1954 Jackie Robinson baseball card you’re passing on will probably get about two seconds of attention. Packrats like us collect and store and pore over what we like and there’s no reason to think you’re compiling a tiny family museum for the benefit of future generations.”

That kind of bummed me out, but he’s undoubtedly correct. My two sons are complete opposites in this regard: the oldest doesn’t give a hoot about a really cool photo of his grandparents and granduncles on the boardwalk at Coney Island from 1940, while his younger brother sees a curio like that and wants to know the story behind it.

Now, that leads me to a biannual tradition in our household, which consists of emptying about 20 piggy banks of all the loose change that’s been accumulated in the preceding two years. It’s kind of like eating hard-shell crabs: you pick through a huge pile, chucking all the coins of no curiosity into a bucket, hoping to find a relative rarity. Today, that would constitute what Booker nabbed an hour into the process: a 1964 quarter, the last year that those coins were 90 percent silver and didn’t have the copper split down the side.

We also compete to find “wheat” pennies, the far more attractive coins that on the flipside of Abe Lincoln’s profile features the words “One Cent” prominently, framed by stalks of wheat. The design was changed in 1958 and not many are left in circulation. This year we captured pennies from 1919, 1942, 1944, 1948, 1950, 1953, 1955 and 1956. And that’s in addition to nickels from the 40s and 50s (sadly, no Buffalo heads—phased out in ‘38—were found this year), one Lady Liberty dime (jettisoned in ’45), and a bunch of new state quarters and coins from India, the Bahamas and Ecuador.

The call for the penny’s abolition gets bandied about in newspaper columns periodically—the last flurry was two years ago when then-Rep. Jim Kolbe wrote a bill that would retire the one-cent piece, since each penny costs the government 1.23 cents to make, but it died in Congress—and I suppose it will eventually happen, which is unfortunate. Packrats like me hope that day never comes.