A photographer travelling through rural Mexico tries to fulfill his desire for artistic authenticity in a town that's hostile to outsiders. 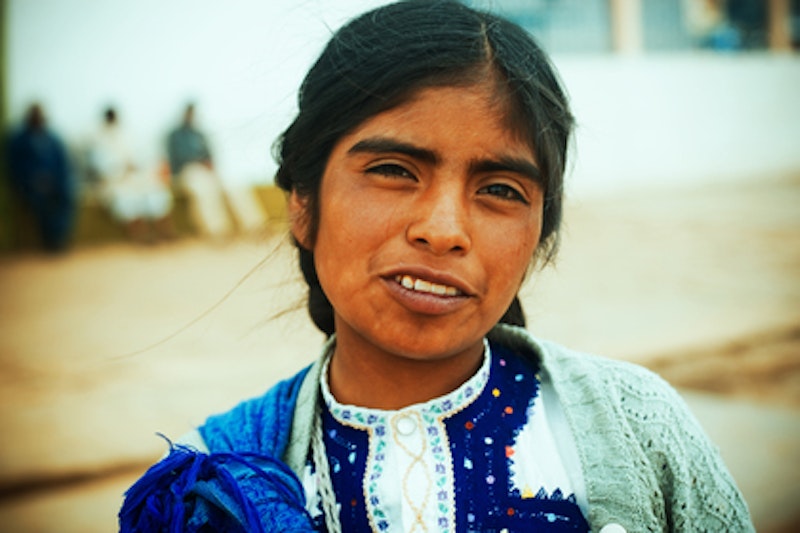 My aunt was helping us plan our trip in the relative comfort of our rental beach house in Cancun. This was before Palenque. Before the military checkpoint that nearly cost us the trip.

"There's a sign on the city gate: no photography allowed. If they catch you, they put you in jail for three days."

Oh! How these words would seduce us! How they weighed down the backs of our minds, following us around the pyramids and down the lonely Mexican highways, nagging us, never letting us forget that the photos we were taking, no matter how intricate or inspired, would never compare to those taken inside the gates of the forbidden city.

"And they'll take your camera." This part, my uncle and I chose to ignore.

Let me pause for a brief confession. There's a fair amount of guilt involved in travel photography. We land in far-off countries and walk around with our $5,000 soul-stealing JPEG file creators, profiting from the misfortunes of the misfortunate. A large print of a fruit market sells for more than all of the fruit contained therein. A photo of an elderly homeless woman, weathered by age and apathy alike, could be worth a half-year of alms.

My uncle found a way around the guilt years ago. Now, he mostly photographs colorful (sellable) doors and windows, neither of which have souls to steal. I had no such out. I flew to Mexico to photograph people, a goal that I would admittedly allow to briefly trump my morals.

This was what I was thinking about as we drove into San Cristobal de las Casas, the town that would be our base camp for the expedition into Chumal. San Cristobal was interesting enough in its own right. Back in 1994, the Zapatista movement organized in San Cristobal and for eleven days waged a very real war against the Mexican government and globalization. If another Mexican revolution were to begin, we were told its source would be San Cristobal.

The city certainly seemed different. The higher we climbed in elevation, the closer the people came to resemble their Mayan forbearers. Girls not old enough to vote nursed children of their own in roadside shacks. Boys bearing machetes followed their fathers to work, scaling the mountainside in neat rows.

"If you want to understand San Cristobal, you've got to understand the Flower People and the Wool People." This was Scott, an Australian transplant—a big, red, sandy man with a nose that had been mashed purple by too many fights or drinks or both. When asked why he chose San Cristobal for his home, he replied, "The culture" with a wink that meant, "The women."

My uncle and I were at Scott's shop to rent a pair of bright yellow scooters. Having the kind of mobility and speed you could get from a scooter made definite sense. Making the two of us more conspicuous didn't, really. To make matters worse, I hadn't ever driven a bike any more motorized than a ten-speed. I decided to make up for my inexperience by completely lying about it, though I think Scott might have caught on when I crashed into the sidewalk outside of his store a few minutes after he'd handed me the keys.

I was terrified as we cut through traffic on our way out of the city. But there was one upside to renting the scooters from Scott—while we were filling out paperwork, he told us about the Flower People and the Wool People. Only four kilometers apart, the twin cities of Zincantan and Chumal produced two completely different cultures.

The Flower People dressed in intricate purple garments and were excessively friendly to outsiders. Scott claimed that they would surround the scooters, wanting to cook meals for the tourists and talk with them about their travels. The Wool People were a nasty bunch, historically violent and stoic in demeanor. They derived their name from the long, black wool skirts worn by the women in both summer and winter. Take a wild guess which culture came out of Chumal.

After two more minor crashes and a bit of positively treacherous mountain road, I parked and locked my scooter near the town square in Chumal. The square itself, guarding an ancient Catholic church that was permanently robbed of its priests during a local uprising, looked empty and overcast. The street vendors looked like they had been turned down so often they no longer had any hope for a sale. We looked around for any other tourists to see if they were taking photos but, predictably, there weren't any.

We bought our tickets for the main attraction—the ex-Catholic church—and walked inside, our cameras still safely in their bags. What we saw was agonizing beyond belief: The church had no pews and dozens of families were lined up, kneeling on the floor in front of rows and rows of candles. Their faces were lit with an even light and I assumed that they were praying until the candles burned down to a single pool of flame and wax. The agony, of course, came from not being able to photograph it.

If I had, it would be easier to believe what I saw next—each of the families had a 2-liter bottle of Coca-Cola. The father of the family nearest me uncapped his Coke and started pouring it out into identical glass cups for each of the family members. The family paused their prayer and started to burp. Scott would tell us later that the burping released evil spirits. The Coke was used to facilitate the process. And because there was a Coke bottling plant in the region, we only saw one family drinking Pepsi.

The altar was covered by a haze that looked more like smog than incense. In the back of the church, light from a window curled the smoke around a wall of statuettes, stacked on top of one another in ornate boxes from the floor to the ceiling. Looking closer, the statuettes were all of traditional Catholic saints, but they were all wearing necklaces holding several tiny mirrors. We learned later that these mirrors were to ward off the evil spirits.

The altar itself was quiet, the Wool People inside the church quiet, though perhaps a bit annoyed at the touristas. Scott told us a story of a wedding he attended inside the church that culminated in the sacrifice of a chicken, the bird's blood sprayed over the processional. But that day, it was just the two of us, freezing in the snow next to a pile of tinder, our unopened bags filled with matches.

We got brave after stepping out of the church. Young kids selling woven belts and colorful pencils surrounded us once again, even though I hadn't bought anything the entire trip. But this time I had something different in mind. I had been talking in broken Spanish with one of kids before I went inside the church—a young girl named Rosa. Rosa talked to me about being 13 in Chumal, about selling woven cinturons and about photography. We negotiated for a bit and then I dug all of the pesos out of my pocket and handed them over.

I had always read about travel photographers buying poses from the locals. From the comfort of my high horse, I thought it was a bit repulsive—an affront to the skill and patience and luck necessary to take an honest, journalistic photo. But something changed in my mind during the long car ride. Morally, it was far worse to just take the photo covertly, to slip back to the States unnoticed with a full Compact Flash card and a heavy conscience. But paying for a photo was a simple exchange of goods. And it wouldn't interfere with my goal.

The price of Rosa's photo added up to be about two US dollars, the sum total of change in my pocket. I dug my camera out of my bag and snapped two quick frames of her in front of the cathedral.

The photos themselves are not remarkable. Rosa looks far older than her thirteen years would suggest, but her eyes show a generous bemusement. My composition was as much created by nervousness as it was anything else. But I will always look upon them as a turning point; photos taken inside a forbidden city by a young man just getting over a bad case of traveler's guilt.

The church in Chumal: once Catholic, now a strange amalgamation of tribal beliefs.

A female member of the Wool People avoids the rain in San Cristobal.

A close-up of some of the male Wool People in Chumal. Apologies for the framing, but I literally shot this from the hip with my camera's silent shutter mode. We left not too long after this.

The market in Chumal. It was very small and unpopulated.