A quick trip to the Yucatan peninsula turns dangerous when the tried-and-true tourist rules are broken. An essay with photos by the author. 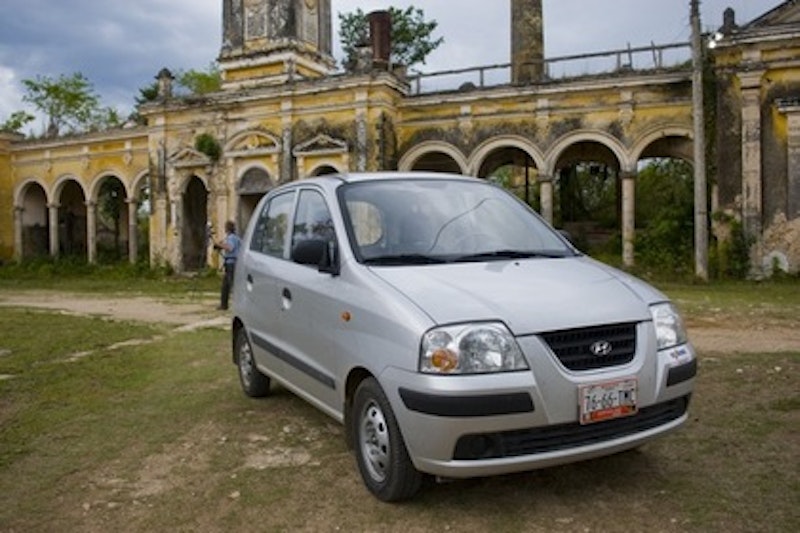 "Manuel" in all his glory.

There are some rules that go along with driving in Mexico:

I realized on the way to LAX that I'd already broken the second rule, having left my road map to the Yucatan Peninsula sitting on the kitchen table.

My uncle broke the third rule at Dollar Rent-a-Car when he signed off on a four-door toaster oven of a Hyundai Atos (with engineering by Dodge). Pulling out of the lot, we christened it Manuel. Manuel had a manual transmission, manual windows, no power steering, no radio, no interior light, one side mirror, zero floor mats and—the worst part—tires so small they would be the spare on other, safer cars.

In the interest of spreading the blame around, we broke the first rule together.

A day earlier, I got off the plane at Cancun. You also can't drive the streets of Cancun at night, not because of the danger, but because there are too many touristas. The aim of the trip, however, was not to run into civilization, but to run away from it—to crash through the backcountry in a red Jeep, rooting out the forgotten villages and photographing the locals.

Instead of that, we were dragging Manuel down a two-lane highway…at night. It seemed as if the rest of the country knew about the first rule—our only highway companions were huge 18-wheelers and potholes. We were pointed towards Palenque, the hidden jewel of the Mayan civilization, unearthed only a hundred years ago from the surrounding jungle. In retrospect, it's more likely that the roads into Palenque were empty because the locals were as bored with the ruins as New Yorkers are with the Statue of Liberty or Empire State Building.

We weren’t alone for long, though. As we crossed the border into Chiapas, we ran straight into a military checkpoint. Orange flares brought traffic to a halt. Teenagers with Uzis stood around in camouflage, looking bored. Their twentysomething captain headed straight for us, all business. This was the other reason you never drive at night in Mexico.

As the captain approached our car, he pulled a black device, no bigger than a flashlight from his belt. By then, one of the other soldiers started talking to us, asking the obvious questions: Where were we going, what we were going to do when we got there, etc. etc. But we were too fascinated to answer convincingly; the captain pulled a lever on his flashlight and out came a silver antenna, like a single rabbit ear on an old television set.

The captain pointed the antenna straight ahead and paced steadily beside our car, step after slow step. The silver antenna moved, to our abject horror, slowly to the left, pointing toward our backseat. I tried to catch my uncle's eye with a confused look, but he turned away, watching as the captain reset himself and walked again, slow and straight, past our car. Once more, the antenna turned and pointed us out, American criminals in a foreign land.

A commotion blew through the roadblock. The young guards woke up. The old guards ushered Manuel towards a thatched hut with their submachine guns. With no hesitation, our bags were unloaded on a long table underneath a lone light bulb, one bag after another in a long line of expensive travel accessories.

My uncle told me to keep an eye our belongings as the captain came back with his dammed flashlight. Again, the captain walked his slow walk, but this time the antenna was more precise, picking my uncle's black camera bag from the line-up.

By this time, my curiosity was overwhelming, so I turned to one of the young men standing at idle and asked him just what was happening. Roughly, he explained to me that the black device was a molecular smell detector. In 200 yards, it could pick out the smell of one molecule of marijuana, cocaine or heroin.

The captain finally spoke, asking my uncle if he had any drugs. No. They started pulling apart the bag and the captain asked again if we had even a small amount? No. Nikon lenses started coming out of the bag, their caps removed and glass elements examined, the collection of my uncle's entire professional career smudged and twisted and turned before him. The captain spoke again, saying that the detector never made any mistakes: If it pointed to us, we had to be carrying drugs. So, he asked, where were they?

My uncle looked at me finally. I could see in his face that he expected The Choice next: between a police bribe that neither of us wanted to pay or detour to a Mexican jail that we might not come out of. This, really, was why you never ever drive at night in Mexico. We prepared ourselves to pay for our mistake.

Just then, a swarm of bugs came out of the night. Big bugs, small bugs—every bug in the lowlands flew towards the sole source of light in the darkness, the bare light bulb hanging above our bags. Within a few seconds, it was hard to breathe. In a few more, it was hard to see. And it wasn't just the two Americans who were uncomfortable; the guards started putting down my uncle's camera equipment to better swat at the bugs.

The air underneath the hut became unbearable. A few of the guards started to leave. Then more. Soon, we were standing alone with the captain, who was so disgusted he told us to leave.

And as quickly as the danger had risen, it dissipated again. We packed our bags back into Manuel and drove off into the night, lucky and foolish enough to drive on for a few hours more.

Local girls from the town of Palenque wait for tourists on the steps of the central palace to sell bracelets and necklaces bearing inscriptions of the Mayan calendar.

The ruins of Palenque, taken from what was once the central palace and administrative offices of the city. In the background, you can see the Temple of Inscriptions.

The small town of Agua Azul ("the blue water"), known for its vibrant waterfalls, is a ripe area for growing and selling bananas.

Simojovel, Mexico - a town with only one road connecting it to the rest of the country. Locals and police alike watch as a parade is set up in the center of town.

During WWI, Mexican haciendas like this one boomed with the increased demand for rope. Now, many haciendas are abandoned as ruins.