Through a series of diary entries, we follow one character on a surprisingly-static journey of whimsy, self-analysis and doom. 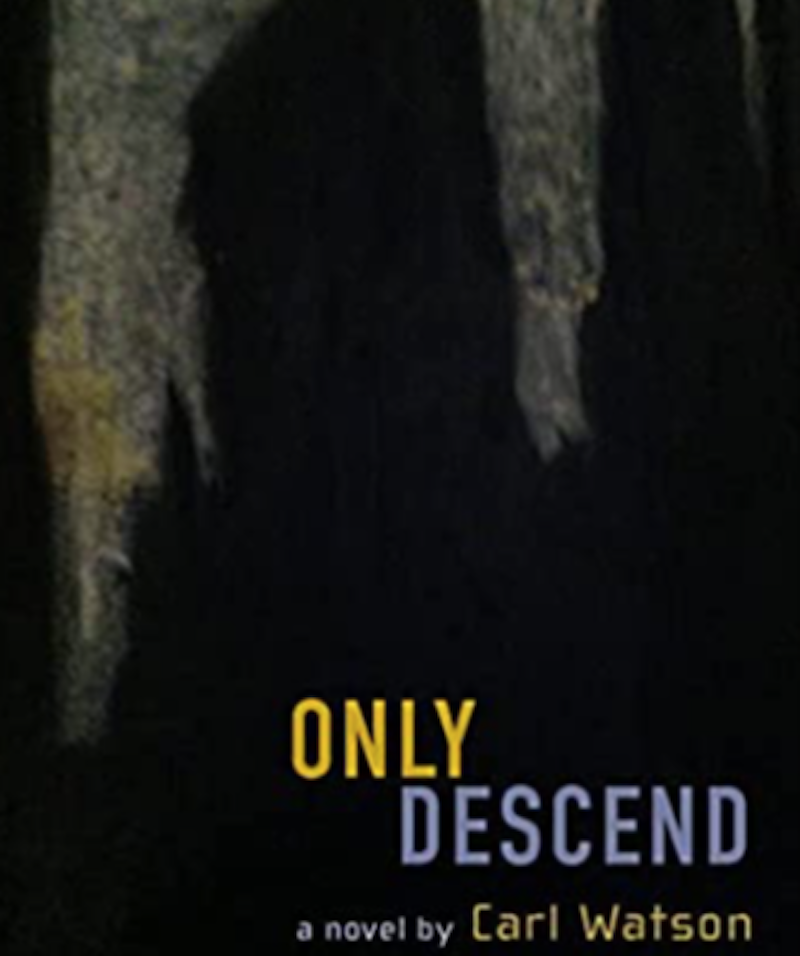 In the 2021 novel Only Descend, Carl Watson’s protagonist Frank Payne is on a journey. And like the twilight zone, it’s one not just of time and place, but of the imagination. Frank’s the archetypical New York City flaneur, a middle-ager whose eye for pessimism, fatalism and brutal self-examination is drawn to the seedier sights and smells of the night city. It’s Good Friday, nearing the Millennium, when Frank begins a winding walk from midtown to his Lower East Side home and his girlfriend, Odee Bones. Feeling unsettled, he’s abandoned a Metropolitan Opera performance of Parsifal midstream.

Frank’s no stranger to the neighborhoods he passes through. There’s the building on 400 W. 57th, where he once lived but is now a boarded-up ghost. There’s 42nd St., where Show World has survived Mayor Giuliani’s cleansing and where an embryonic yellow light makes blood look black. There’s the Garment District, with its sub-districts selling casket handles and glass taxidermy eyes. Frank’s mind meanders through his earlier memories of these locales, but his thoughts reliably return to Odee, who’s likely (though he wouldn’t bet on it) at home waiting for him. Still angry that she crashed his car, suspicious that she’s involved with another man, Frank internalizes the insecurities and growing anomie between them as they stumble in a small studio apartment. New York artists will relate to their cramped lifestyle, into which Odee has inserted a mannequin she’s draping with feathers. The walls are decorated her photos of her Roadkill Project.

As Frank flows past the bottom feeders of Manhattan, the tentacles of his racing thoughts drag him deeper into morbidity. He’s the star of his own dark opera, befriending an attractive woman at a bar, the lust object of saucy transvestites, and jousting with various hustlers. The common thread is that each scene descendsinto neglect, ridicule, insult, abuse or violence. Frank’s obsessions with science, curios, suicide, victimization, and his more macabre insights about life might kill another person, but Watson enables his character with a sardonic sense of the absurd. Frank suffers from PTFMS—Post Traumatic False Memory Syndrome. He’s often under siege (by a briefcase-hauling midget on a skateboard, a dead white pigeon on a pizza box). He fantasizes he’ll be discovered by a talent scout who sees him on surveillance camera footage.

Like Watson’s earlier novels, Backward The Drowned Go Dreaming and Idylls of Complicity, the human journey faces landmines of humiliation, fragility, misery, and crippling self-doubt. “Everywhere people were going down. Jumping out of windows. Falling down drunk. Going up in elevators only to come down again. Their faces fell as they aged. Breasts and testicles hung lower by the hour. You had to make it seem like a form of power.” And, in the end, Frank and Odee’s journeys never quite cross, except they’re both descending.

The novel mimics the structure of Dante’s Inferno, as street numbers become “rings” of tortured reminiscences, and diary entries act in the same way. Its theme is one of ultimate arrival. Around 14th St., a sense of foreboding takes hold of Frank he closes in on home, as if he’s sailing into a maelstrom of his own making. You could say that the signpost up ahead is Hell, and it’s the East Village in The End of Days, racing downward toward the Millennium, descending into an era in which people like Frank and Odee are no longer its heartbeat but replaced by a media-consuming, mind-numb, i-Phone addicts drinking lattes and walking designer dogs. Only Descend is fundamentally New York City as a roadmap that examines whether, in the 21st century, humans are on an unconscious pilgrimage toward self-destruction, or a mission to save what we love. You decide.