Claire, a practicing life coach in Houston, preached the gospel of personal growth. 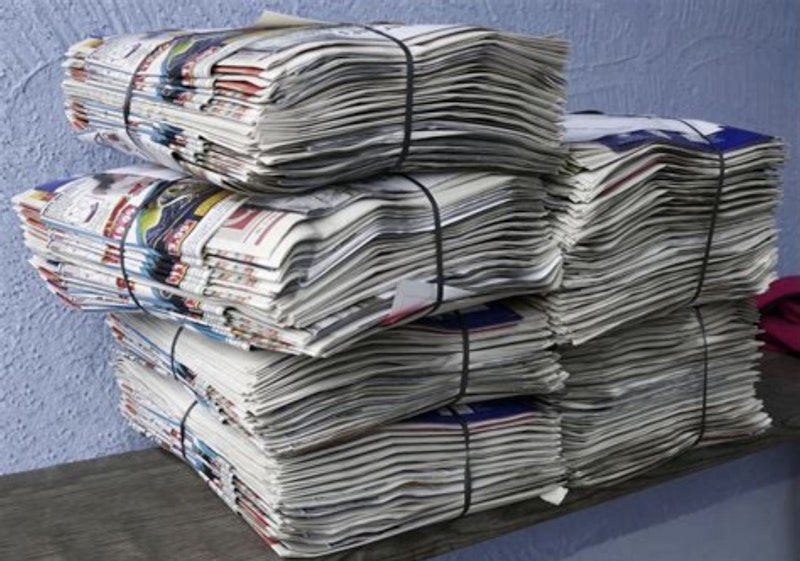 The first stop on Paul’s daily walk into town, his white face buttered against the sun, was the 7-Eleven, where he bought the Times. He loved his Times, if not the venue. The news racks, just inside the left front window, occupied the same tight dead-end aisle where the poor folk threw away their money on Lotto. Or so Paul looked upon those he had to squeeze past in order to get to his precious Times.

On this day, a Tuesday, on approaching the store, he noticed a curious sight in the window and stopped in his tracks in the parking lot. One of the more senior Scratch-Off players, a wraith-like Black woman known as Bertie who tottered about with the aid of a cane, was sitting on something not meant for sitting—the rack stacked high with copies of the Times; the rack Paul took from every day.

But now what to do with Bertie in the way, resting her bones on the cushioning stack? Paul stared in at the seated figure. Her back was to him, but it was Bertie all right. He knew the faded blue of her cap, a Mets cap pulled down low on her ears, and the false black hair with glints of red that fell in hanks to her knobby shoulders.

The two front glass doors swung open repeatedly as lunch-hour customers poured in and out, and still Paul hung back staring in at Bertie. He knew her to be a gentle lady who’d rise at the drop of a gentle word, but he shied at the thought of rousting a person of Bertie’s advanced age. For all he knew, she was feeling poorly and was sitting out of dire need. All the more reason not to disturb her.

And after all, there were other places that sold the Times. Farther on along his route were two such outlets—the corner CVS on DuBarry and Manny’s Cigars on Union Crossing. True, they didn’t have nearly the supply as the overloaded 7-Eleven and were often out of the paper early. Better not to tarry, then. It would take 10 minutes to walk to Manny’s; Manny’s was the slightly closer of the two.

He was ready to sally forth, to turn his back on 7-Eleven, when the voice of his adult daughter sounded in his head: “Do the hard thing, the uncomfortable thing.” Claire, a practicing life coach in Houston, preached the gospel of personal growth.

There was no question what his daughter would have him do in the present case. He now went forward into the store and turned hard left with a soldier’s precision. Here he paused to take in Bertie, who looked quite comfy in her throne-like rack. The Lotto-cum-news aisle was otherwise dead.

He and Bertie were on good terms, or pleasant terms at any rate. Whenever the two of them chanced to meet, friendly greetings were exchanged between them—a wave, a nod, a smiling word. Paul was ready with a smile now as he stood above the old woman, whose eyes were blocked by the bill of her cap.

Paul crept forward, making a noise, and only then did she lift her face with its two deep furrows running down the sides of her nose to the corners of her mouth. And there was Paul with his big head lowered, almost nose to nose with her. For once she had no answering smile. A startled look came into her eyes.

“Excuse me,” Paul said gently, pointing beneath her to the stack of Times. Common words, but in voicing them, he heard a tacit plea: “Excuse me for being a well-off white guy who has the dough to blow on the Times.”

What happened next he didn’t see coming. Pressing down on the arms of the rack, Bertie struggled onto her feet, whereupon, turning, she reached down behind her and plucked from the stack of Times the topmost copy. This she then presented to Paul in the manner of a gift. But Paul didn’t take it, as good manners dictated. Instead, smiling his apologies, he reached around and behind the good woman and pulled out the second copy from the top. It was Paul’s inveterate superstition (as it was his late father’s) to avoid like the plague the topmost copy. In parting, he thanked Bertie over his shoulder, paid for his Times, and left the store.

Was Bertie offended by what he had done? The question nagged him into the night. Unaware of his superstition (and his late father’s before him), she might well have thought that the paper she sat on—and blithely offered him—was sullied in his eyes and rejected accordingly. “No,” he wanted to tell her, “don’t take it personally. I never take the top copy, nor did my father.”

The next moment he’d see the matter quite differently. At bottom weren’t all superstitions rooted in the world of actualities? Take this aversion to the topmost paper. He didn’t know how it started with his father, but maybe in his youth in Cleveland, Ohio, he saw some not quite tidy person resting his bum on a stack of Plain Dealers. The boy’s fastidious nature was revolted. For the rest of his more than 90 years, the topmost paper, however spiffy, was deemed unkosher and left where it was.

In Paul’s case there was no such event that accounted for his own superstition. But could he honestly say for sure—if he’d never been in thrall to it—that it wouldn’t have taken root in him with Bertie’s action this afternoon? That he wouldn’t have rejected out of hand her offer of the top copy?

The next day he headed out to 7-Eleven as usual, and as he came in sight of the place and its badly-pitted parking lot, he ran into Bertie sitting out front on the loafer’s ledge to the right of the main entrance. Was this the start of a trend? he wondered. He’d sometimes see her taking her ease on one of the benches set at intervals along the paths of the town green, but until now never on the loafer’s ledge here, and up until yesterday never in the Times rack.

“Hello there!” he boomed out, throwing up a hand to her, as if he were quite ready to move on from yesterday. “I hope you’re enjoying the beautiful weather.”

Alas, not everyone was keen to move on. Bertie’s reaction—if reaction it was—brought down his hand like a bird shot in flight. She got up brusquely, gathered her cane, and tottered off without a word. Like so many of her Scratch-Off peers, she lived just up the road a bit in the hulking, red-brick seniors complex named for a long-dead mayor of the town. Paul stared after the retreating figure picking its way slowly homeward. Unless his eyes deceived him, he now perceived where he stood with Bertie.

At dinner that night he told his wife the story of his two encounters with Bertie. “Give me some advice,” he said after Jean had heard him out. “What should I say to her the next time I see her? Address the matter head-on? Ask if I offended her?”

Jean threw up her palms in appeal. “What about simply chatting with her? Ask her how she’s doing with Scratch-Off.”

An actual conversation with Bertie was something he’d never undertaken. He mulled a range of topics, but why not Jean’s suggestion? Maybe he’d even play a card for the first time, guided by Bertie’s expertise.

At bedtime he lingered with the book on his nightstand, an old book of travels by the writer George Gissing, and was struck by one of the author’s statements: “It is my desire to be at peace with all men.” As it is mine, thought Paul on the instant. Yes, he added, and with all women, too.

He sought out Bertie the following day at 7-Eleven, but she wasn’t there; neither in the aisles nor out front. His efforts at peace would have to wait. He paid for his paper and went on his way.

He had a piece of mail to drop and was headed for the post office when who should he see coming toward him on the sidewalk but Bertie and a companion from the old folks home. His timing couldn’t have been more propitious. Bertie was smiling under her cap at something the friend had said and was caught in that smile when her eyes met Paul’s. At that very instant, seizing on her mood, Paul cut in with a gallantry: “I like your shirt,” he said to her across the interposing friend. Peeking out from her open coat was a blouse-front aswirl with colors. Neither party slowed up. Bertie thanked him, completing the circuit, and then the two were past each other. Paul walked on with a bounce to his step.

One of his errands after the post office was picking up lunch food for Jean and himself. On returning home he waited till the two of them were sitting to their meal before he told her what had happened. He liked having something to talk about at lunch, and it was all he could do, since he walked in the door, to check his tongue from spilling his news. But now with the breaking of bread he began.

“Let me tell you about Bertie,” he exclaimed, and proceeded to rattle off his story with unconcealed relief.

He wasn’t thinking about Bertie next day as he made his way to 7-Eleven. His anguish was over. They were at peace.

At busy Morris Avenue he was in luck. As he neared the corner the light turned green, and he started across without breaking stride. That didn’t happen every day. The green was always stingy here.

His luck continued as he neared the store. He could tell by the paucity of cars out front in the parking lot with its two dozen spaces—he could tell the store was relatively empty, which meant he wouldn’t be long in paying. Far too often he had to wait in an interminable queue inside. He bounded toward the entrance doors.

But wait—what was this? As Paul strode closer he noticed through the window the familiar outline of Bertie from behind, plopped in the saddle of the rack again. The Times rack, his rack, just like that first time. He stopped and stared in disbelief. What should he do?

His daughter’s face appeared before him, repeating her commandment: “Do the hard thing, the uncomfortable thing.”

He stood undecided, weighing her words, and finally came to a resolution. Ten minutes later he reached for a Times in a well of the shelf at Manny’s Cigars.