Some of the minuscule cemeteries that still dot Queens. 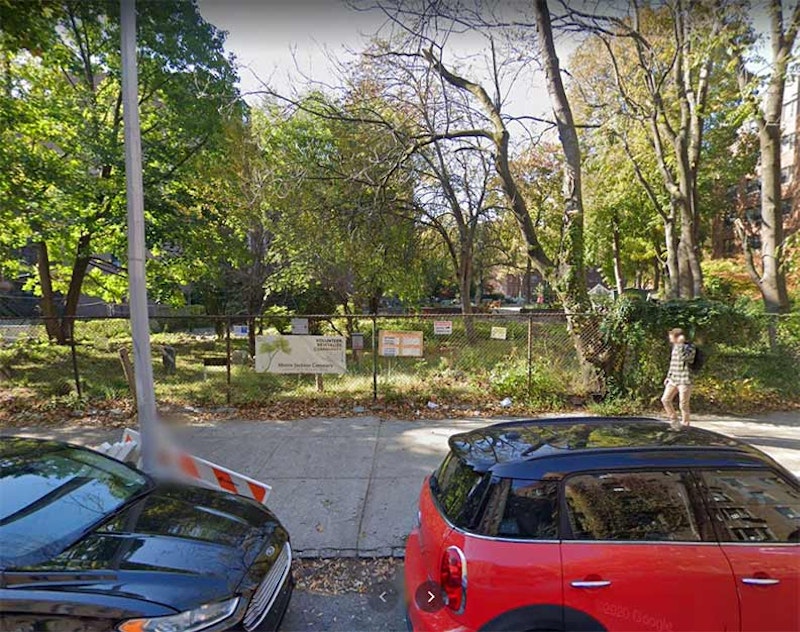 Moore-Jackson Cemetery is located in what I call Deep Woodside, on 54th St. between 31st and 32nd Aves. When the trees are leaved out it appears to be a community garden on the west side of the street, a function it performs unofficially today. But this has been a burying ground since 1733, and has endured lengthy stretches of abuse and revival in a nearly endless cycle. 2021 finds is one of its more fortunate periods. In January I visited at a good time, as the slanted sun hit the remaining gravestones at an angle just right to produce a pleasing offset of sun and shadow.

Queens is dotted with minuscule cemeteries, some still existing, some as dead as the people who were buried within. Corona used to have a small cemetery on Alstyne Ave. that’s long forgotten. The Bunn Cemetery on 46th Ave. and 165th St. in Flushing was, about 20 years ago, rededicated after it was cemented over by Robert Moses in the 1930s. Some, such as the Bayside Acacia Cemetery in Ozone Park, are overgrown with weeds and neglect. Some, like the Brinkerhoff Cemetery, on 182nd St. in Fresh Meadows, are the center of a tug-of-war between developers and preservationists.

Woodside and Elmhurst, Queens were home to the Moores, the family that gave rise to Clement Clarke Moore, to whom the famed poem “A Visit From St. Nicholas” is credited. Clement was the great-great-great grandson of Reverend John Moore, who became the first minister in the town of Middleburg (today’s Elmhurst) in 1656. His son, Captain Samuel Moore, built a house near today’s Broadway and 83rd St., the site of the Moore Homestead Park; Samuel Moore Jr. built a farmhouse near 31st Ave. and 54th St. in 1701 (demolished about 1900) and owned about 100 acres of surrounding woodland in the 18th century. Family descendant Nathaniel Moore, Jr. stipulated in his 1827 will that his real estate on either side of Bowery Bay Rd. (today’s 51st St.) be sold after his death, with the exception of the family burial ground, located today on the west side of 54th St. between 31st and 32nd Aves.

The cemetery was established by 1733 (the date of the earliest known burial) and has been known as the Moore-Jackson Cemetery since John Jackson married into the family and added to the cemetery’s acreage. He was buried in the churchyard of St. James Episcopal Church on Broadway in Elmhurst. The last interment in the cemetery was in 1867. 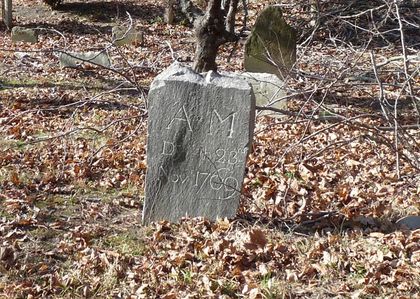 The Queens Topographical Bureau surveyed the cemetery in 1919 and located 42 identifiable monuments, which were inscribed on a survey map reproduced in Woodside: A Historical Perspective by Catherine Gregory (Woodside on the Move, 1994). When construction of the houses seen above began in 1924 the cemetery was used as a rubbish dump. The NYC Department of Health ordered it cleaned of weeds and litter, and by then it was so overgrown that workers discovered headstones within. The chain link fence was erected in 1956, but the cemetery continued to be plagued by neglect. By the 1990s a more concerted effort was made and the cemetery’s condition has stabilized.

There are just a handful of monuments remaining of the 42 that the topographical survey found in 1919, and most are in the back (the 51st St. side, out of range of my zoom lens). But a couple do stand out, including Augustine Moore’s well-preserved 1769 stone which is right in the front. “x” was occasionally used to separate initials in this era. Records show that he was the son of Samuel Moore, Jr, and died at 17. 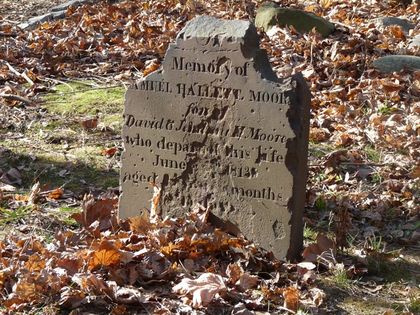 The Halletts are an old western Queens family: they were among the original settlers of Long Island in the 1600s and are remembered by Hallett’s Cove, an indentation of the East River at Astoria Village. 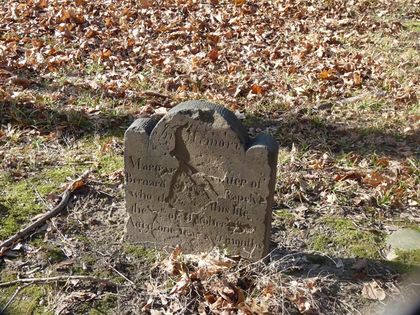 This one is especially tough to make out; it was apparently relocated from the back of the cemetery, which is where the QTB survey placed it. According to the list of gravestone inscriptions in Gregory’s book, it reads: In memory of Margaret, daughter of Bernard and Deborah Rapelye, who departed this life the 7th of October, 1790, aged one year and 11 months. The Rapelyes, or Rapeljes, too, are in a longstanding Dutch immigrant family in Long Island going back to the 17th century. That’s about it for the readable gravestones, which have deteriorated over the centuries. I was only able to shoot through the chain link fence. However: you’re permitted to enter, with or without a penitent’s hood, on Saturdays from 9 to 12, last time I looked.