Phil Hellmuth vs Tony G: The bully meets his match. 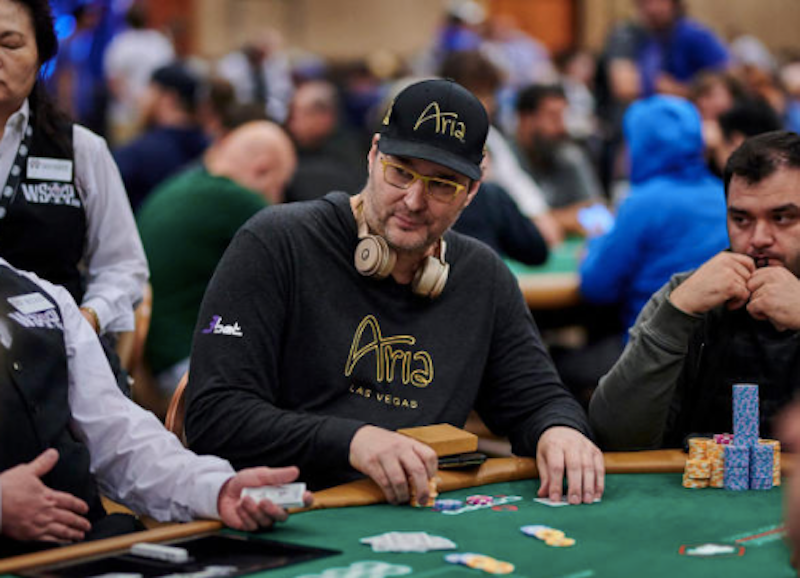 Poker legend Phil Hellmuth has won 15 titles in the events that comprise the World Series of Poker, but bad cards at the poker table have often turned him into the foul-mouthed Captain Ahab of the felt. Here's a sample, from the 2021 World Series, of what Hellmuth's opponents have been forced to endure throughout his career: "I think I'm going to burn this fucking place down if I don't win this fucking tournament. How does he get fucking rewarded for that bullshit play? Godammit, what the fuck is going on here? Damn, motherfucker, it's so unfucking fair, man. I play like a fucking genius to get down to this fucking place every day." Phil Hellmuth considers himself a genius.

I’ve watched a fair amount of professional poker on TV and YouTube, and my observation is that the top pros are generally well-mannered and cordial. They take their losses, even the bad ones, with equanimity. Because they're pros. There are, however, a handful of exceptions to the general level of congeniality, and Hellmuth's at the top. Bullies are practically begging to be knocked down a peg and, sure enough, a colorful guy who called himself "Tony G" (real name: Antanas Guoga) found his way into the poker circuit and was happy to do that job. What made it fun to watch was that Tony G always did the job with a smile on his face, which must’ve made it even more aggravating for the egotistical Hellmuth.

The Phil Hellmuth vs. Tony G show was once the most riveting rivalry in professional poker. A prime example of their relationship occurred during the second season of PokerStars.com's Big Game, a TV program featuring the crème de la crème of the poker world going head-to-head that aired on Fox from 2000-2001. Tony G declared he was "all in" (betting all of his chips) in a Texas Hold 'Em hand without, he claimed, having even looked at his two "hole" cards—cards not viewable by a player's opponents. Hellmuth fell for the ruse, called Tony G, and lost a lot of money, which provoked one of Hellmuth's signature post-hand meltdowns. As the guy known as The Poker Brat was leaving the table, Tony G said, "I think you should retire. It's over. You're not there anymore, Phil. I think you should take your coach, get a tandem bike, and get the hell out of here."

Tony G (the Rubik's Cube champion of Lithuania before moving to Melbourne, Australia, at 11) was mocking Hellmuth—aka "the John McEnroe of Poker"—for having a poker coach (who was in attendance at that game), and the bike reference was the catch phrase he used to dispatch certain defeated opponents. His words would seem brutal to anyone unfamiliar with Hellmuth, but Hellmuth, who's won over $26 million in live poker tournaments, had already established himself as the game’s biggest bully. Viewed from this perspective, many—including myself—found Tony G's breach of etiquette (the lie about not having seen his hole cards) and his rudeness amusing. His actions were obviously aimed at a fellow player he thought deserving of such abuse. Tony G made that clear when he said, "I'm sorry if I bullied you, Phil," a sly reference to Phil's bullying nature.

Hellmuth, the guy who dropped about 20 f-bombs over four poker hands and threatened to burn the place down if he didn't win, complained over and over about his opponent's poor etiquette, oblivious to the irony of his whining. This was a confrontation between poker's worst loser—Hellmuth—and its worst winner. The problem for Hellmuth was that, in this heated rivalry, he usually played the Johnny Ringo role while Tony G was Doc Holliday. The Poker Brat's  specialty was multi-day poker tournaments that involve dodging multiple eliminations in order to win big in the end, but these two squared off in what are called "cash games"—single poker games that last for a few hours. The two formats require different skill sets. Tony G wasn't shy about reminding Hellmuth of this situation. "I clean you out every time I play you," he once told Hellmuth on Big Game, to which the latter replied, "You're so bad you don't even know it." Hellmuth was referring to the fact he was, in a technical sense, a better player than his opponent.

Tony G, while he did play in big-time games involving million dollar pots, wasn’t a pro in the strictest sense in that he didn't rely solely on poker to make a living. He was a successful businessman who liked to gamble big money. During one of their many confrontations, Hellmuth spelled this out for Tony G: "You know you can't get by through the conventional bounds of poker, which is why you have to cross all the lines.” Tony G, having just taken $75,000 from his opponent on the first hand of the game, responded, "I beat you over and over and over. I own you." Later on Tony G bluffed Hellmuth into folding with the superior hand, and the Poker Brat was steaming, as he often does, about his "bad luck." Tony G, sensing an opportunity to twist the knife, replied with his usual grin, "You're a disgrace to the game."

Unfortunately, poker fans have lately been deprived of the satisfaction of watching the bully-basher beat up on the bully. In 2014, Tony G was elected as a member of the Lithuanian Parliament and stepped away from the game, although he still makes occasional appearances in high-stakes games. That means that Hellmuth's now freer to be the boorish, petulant professional poker superstar who throws a hissy fit whenever he gets a "bad beat"—an odds-defying bad card late in the hand that wrecks what appears to be a sure win—and then denigrate his opponent as a "donkey player," or one of his other favorite insults. Hellmuth routinely breaks the rules of poker with his foul language and abuse of his opponents, and those with the power to discipline him routinely let him get away with it.