Thanks to Tumblr, I'm Genderqueer

I'm finally starting to understand myself. 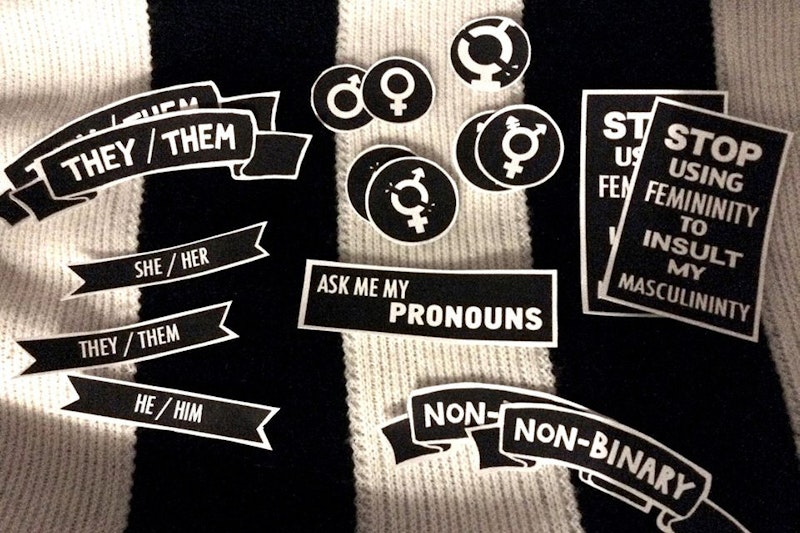 Whenever I tell people I'm genderqueer, they usually respond in one of two ways: “What's that?” or “Isn't that something Tumblr made up?” I have no problem with the first question since not many are familiar with non-binary trans people, but the second question is annoying. To say I'm genderqueer because of something I read on Tumblr dismisses my long self-discovery. I could go through the history of non-binary genders and all the gender therapists who recognize them, but sometimes I have to say, “Yes, if it wasn't for Tumblr, I wouldn't be genderqueer, and here's how.”

It’s a cliché, but I always knew I was “different.” I’d try to socialize with all the other boys at school, but always felt, “I’m not one of them.” Socializing with girls, I’d think, “I’m more like them… but not totally one of them.” Masculinity never fit me, but femininity, while much more comfortable, didn’t either.

In high school, I discovered David Bowie, the Goth scene, and The Rocky Horror Picture Show. They introduced me to the idea that gender expression can be fluid, and there’s no right way to behave if you were assigned male at birth. Androgyny fit me, but I didn’t think of it as any sign of being transgender. I never had any extreme discomfort during puberty, except for excessive body hair. Shaving my gorilla hands was enough to ease my discomfort.

Things changed slowly during my 20s. I was engaged to a woman from a patriarchal Christian family, and they constantly pressured me to be a Man of God: someone to take charge of the relationship, make all the decisions, and keep my fiancée’s religious beliefs in check. The bullshit gender roles were bad enough, but something also started changing, I looked at women and wanted to look like them. I wanted their clothes, figures, hair, and nails, but I knew men weren’t supposed to look like that, so I brushed it all off. Besides, I still didn’t have any discomfort in my genitalia, so I just chalked it all up to having a secret fetish.

That’s when Tumblr stepped in.

I broke up with my fiancée after six years and came out as bisexual. It was a time to explore my queerness, and one of the first places I went to was Tumblr. I made friends with other bisexuals who helped me feel more comfortable with my sexuality. I noticed that some of these new bisexual friends also identified as genderqueer, including a YouTuber named Verity Ritchie. In one video, they described their gender as “being both a boy and a girl at the same time.”

“There’s a word for that?” I thought.

So I started looking up information on being genderqueer on Tumblr and reading stories from other genderqueer people. Everything I read resonated: “Sometimes I feel more like a boy, and sometimes I feel more like a girl.” “I feel like I’m both a boy and a girl at the same time.” Every testimony I read delighted me, but I wasn’t sure if the label fit. I didn’t want to appropriate someone else’s language just to be hip and cool. However, I slowly started warming up the label as I experimented with my presentation.

I painted my nails. I started wearing infinity scarves. I grew my hair long. I shaved my beard. I started wearing shirts and jeans from the women’s section at Target. I wore lipstick, eyeliner, and eye shadow. I started going by they/them pronouns. The more I changed my presentation, the more I realized I finally found a word that described what I always felt: genderqueer. Unfortunately, I soon ran into an obstacle: skeptics.

While there are a few studies that show a neurological basis for binary gender identities, no one’s done one on non-binary identities yet, which leaves room for a lot of people to say non-binary identities don’t exist. I asked myself, “Was I wrong all this time? Am I just a cisgender person appropriating transgender language just to be hip and cool?” I started seeing a gender therapist. During our second session, I told her about wanting to look more like a woman in my 20s, and I’m currently considering laser hair removal. She said, “You’re definitely not cis. Cis men don’t want to remove all of their body hair. Cis men don’t look at beautiful women and want to look like them.”

That was the validation I needed. My gender therapist believes I’m actually a trans woman, and maybe I am, but I’m finally comfortable calling myself a non-binary trans person. And I have Tumblr to thank for that.