No One Likes Radicals

America needs some major changes, but self-styled revolutionaries have nothing to offer. 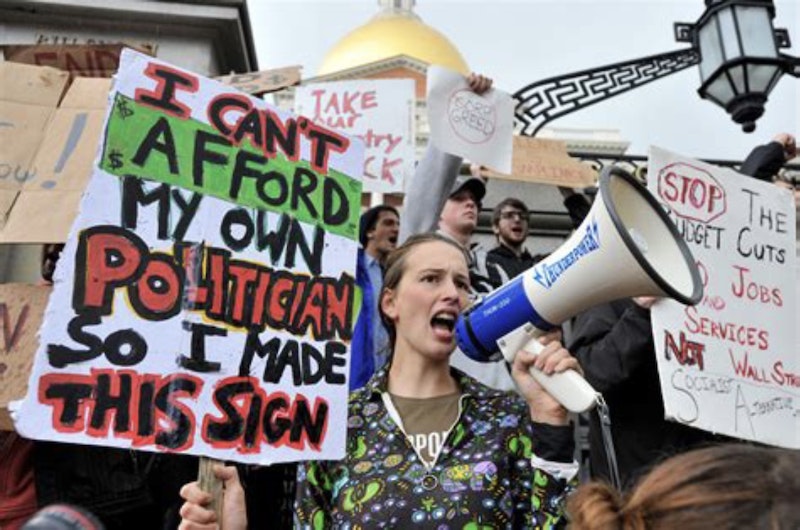 In the dark days of summer 2020, I had a particularly frustrating exchange with an old friend. Like a lot of people in my peer networks, he was very engaged on the question of policing, arguing for outright and immediate abolition. And like a lot of people who, like us, grew up spoiled and sheltered in upper-middle-class white suburbs, he was very flippant and forceful about it.

Eager to get a rise out of him, I said, “You’ve become a libertarian at last!” He didn’t like that. I told him any changes to policing must be carefully thought out. He said they won’t be, and it doesn’t matter because gangs won’t be roaming the streets, and any concern they will be is just a dog whistle. I mentioned that gangs still exist—including conspicuously white ones like the mafia and the KKK—and that the types of crimes they commit disproportionately affect poor people of color. He retorted that cops don’t do anything about gangs anyway. Baffled, I asked him, “Why then are the prisons packed with so many gang members, presumably someone must have put them there?”

His response was rich. In addition to abolishing the police, he also wanted to abolish prisons but said that so long as we have prisons, we should be filling them with cops. Who would put the cops there? What mechanism other than more overwhelming force would make this a reality? Would he be willing to perform the task himself? What an image: A white dude from one of the wealthiest and safest areas of the country, locking up non-white officers who grew up in some of the poorest and most violent areas.

I pressed him about the lack of support for policy abolition among people of color (recently reaffirmed overwhelmingly by the black population in Minneapolis). He posited that left-wing ideas don't require popular support to be the right ideas. Apparently these radical, enlightened ideas are just right, regardless of timing. He told me that history doesn’t remember the moderates. Perhaps it hadn’t occurred to him that while radicals are often remembered, it’s often because they’re despised by most people.

These attitudes are emblematic of so many aspiring leftists, especially ones who emerged a decade ago in the wake of Occupy Wall Street. I remember visiting Zuccotti Park in October of 2011 and chatting with many of the activists. With a few exceptions, most were also from the suburbs, frustrated that their academic credentials hadn’t given them cushy gigs. While I agreed there was something to be angry about in the wake of the 2008 financial crisis, the movement’s lack of leadership and coherent agenda left me unsettled.

But this incoherence has been one of the modus operandi of the left since at least the New Left of the 1960s, with antecedents in its intellectual tradition that date back to its origins in the 18th century. It’s allowed it to contort itself to fit the shape of each historical moment, always playing the role of the subversive, anti-establishment voice, while functioning as the harshest enforcers of establishment imperatives.

Look no further than our present moment. As the US government begins to relax certain Covid restrictions, what does the self-appointed voice of the working class have to say? The left is outraged. They claim these changes merely show our government’s subservience to capitalism. Like a mother bird protecting its chicks, they declare that workers are condemned to die of Covid so that the money and “treats” can keep flowing. And most laughable of all, they’ve become zero-Covid lockdown enthusiasts. If we only had a real lockdown, they say, we could have eradicated the disease right away. They demand to be taken seriously.

No one has benefitted more from lockdowns and restrictions than the titans of global capitalism. The legislation that made the restrictions possible involved gigantic upward transfers of wealth. Furthermore, the stay-at-home orders and forced store closures pulverized many small businesses, which played right into the hands of large conglomerates that could weather the storm and come out even bigger and more powerful as a result.

And of course, it gave sweeping new powers to the “Great Satan,” their supposed sworn enemy: the US government. With one hand they point to the state as the engine of imperialism, founded on bigotry, brutality and lies; and with another they demand that exact same state basically declare martial law to keep people in their homes. This is to say nothing of the increase in suicides, substance abuse, family breakdown, and social atomization that resulted from Covid measures—all of which makes most people more isolated and desperate, and thus more vulnerable to the imperatives of the ruling class.

They’ll respond even more unhelpfully that if they were in charge, the CARES act would have made UBI permanent, created Medicare for all, and essentially paid everyone to stay at home. How do they suppose people would be fed, or the power plants kept running, or goods produced and delivered to those who need them? I remember them saying, “Lockdown, there was no lockdown, you just ordered UberEats and jerked off all day.” Their solution would probably include some floating signifiers like “mutual aid” (i.e., the radical chic equivalent of Republicans telling the poor to go beg for charity) or the “abolition of capitalism.”

The point, as always, isn’t intellectual consistency or to hold positions that would benefit the working class. It’s a personal branding exercise meant to create discursive distance between left-wing influencers and their imagined antagonists. It allows them to seem subversive, pointing a finger at capitalism, when their proposed demands are the greatest gift to capitalism itself. If a movement’s class composition is overwhelmingly that of middle and upper-middle-class white collar college graduates, would you expect anything different?

When you’re raised in a rich or upper-middle-class suburb, you don’t need to be told to act this way, you just absorb it. Different factions display this in their own way, but it’s the same expression of elitism and entitlement. The preppie kids were at least upfront about it. When you see a bro in a pastel green polo with the little alligator on it, you know what you’re in for.

It was the theater kids and other outwardly “sensitive” and “thoughtful” types with whom the attitude was more subtle anddevious. Rather than flaunt their status with boutique goods, they cultivate it with boutique beliefs. In adolescence, this usually involves engagement in quirky and “alternative” fandoms. In adulthood, it shows up in contempt for the “creepy” maintenance worker fixing their desk light as they do PR work for a book about rioting being “good, actually.”

For the modern American left, it’s a brand differentiation exercise that differentiates them from the Republicans they grew up with, the “chuds” in rural areas, and whatever remains of the religious right. Christopher Lasch, in Why the Left Has No Future, discussed how the left was “unable to explain the persistence of religion, pro-family attitudes, and an ethic of personal accountability except as an expression of false consciousness.” Upper-middle-class radicals don’t need a church community, a stable family, or an attitude of responsibility, they’ve lived their whole lives financially insulated from these needs.

Lasch goes on to describe the “embarrassing gap” between leftist ideology and popular aspirations held by most people. This leaves them to “wait helplessly for the revolution, while fulminating against ‘capitalism,’ or to try to gain its objectives by outflanking public opinion, giving up the hope of creating a popular constituency for social reform, and relying instead on the courts, the mass media, and the administrative bureaucracy.”

The courts, mass media, and the administrative bureaucracy aren’t arms of a mass worker’s movement. The left’s ideological commitments to liberation, emancipation, and the reshaping of society may have dovetailed with and reinforced the emergence of popular democracy and the worker’s movement. But this was more of an accident than an axiomatic relationship. By the time Lasch was writing about this in 1986, there was very little overlap left.

Revolutionaries have often operated at a distance from the genuine worker’s struggle. As Eric Hobsbawn writes in The Age of Revolution, the European revolutionary movements of 1830-1848 “remained to a great extent minority organizations of middle class and intellectual conspirators, often in exile, or confined to the relatively small world of the literate.” He later says that “the bulk of the conspirators consisted, as before, of men from the professional classes or the lesser gentry, students and schoolboys, journalists and the like.”

Speaking about Britain in particular, Hobsbawm notes that 19th-century socialism was composed largely of “Propagandist and educational groups standing somewhat outside the main stream of labour agitation.” Even the Chartist Movement fell victim to the “political incapacity of its leaders, local and sectional differences, and an inability for concerted national action other than the preparation of monster petitions.” When its key goals were eventually realized, it was through parliamentary action,not an ersatz re-enactment of 1789.

But why does the proximity to comfort seem to breed would-be radicals and revolutionaries? In The True Believer, Eric Hoffer painted a picture in 1951 that sounds eerily prescient: “It is usually those whose poverty is relatively recent, the ‘new poor,’who throb with the ferment of frustration. The memory of better things is as fire in their veins.” Most poignantly, he says that a mass movement “attracts and holds a following not by its doctrine and promises but by the refuge it offers from the anxieties, barrenness and meaninglessness of an individual existence.”

Poor and working-class people don’t need to “self-actualize” through dreams of revolution, liberation, and emancipation. Their lives are meaningful enough already, as Hoffer says: “The goals are concrete and immediate. Every meal is a fulfillment; to go to sleep on a full stomach is a triumph; and every windfall a miracle. What need could they have for an inspiring super-individual goal which would give meaning and dignity to their lives?” To this question, the left has had no compelling answer in nearly 100 years.

This isn’t a ribbon-cutting endorsement of the American right. People shouldn’t be partisans. They should vote their interests and values on a ruthlessly mercenary basis. In the current environment, the Democratic Party and its constituent institutions must be decisively checked. But that doesn’t mean that something like legalized same-sex marriage should be reversed. A couple who minds their own business should be able to enjoy that right on its own terms.

Much of the right has moved away from Zombie Reaganism since the carnivalesque joke that was the Tea Party. Some conservatives don’t spontaneously climax at the thought of the 1981 Kemp-Roth tax reform act. Which is why I roll my eyes at people who pose as the vanguard of traditional values and western civilization on the online right. Within the “trad” aesthetic and “based” pronouncements, there’s little more than another personal branding exercise. Within their fever dreams of “collapse,” “the rejection of modernity,” and “national divorce,” there’s little to gain beyond stasis and despair.

This variant of radicalism is a waste of a major opportunity. People from across the spectrum are looking for a way out of the endless culture wars, economic uncertainty, and the politicization of everyday life. That will take some big changes. But they don’t want a revolution. They don’t like radicals. I often hear people say things like “Oh, so you think you can reverse the cultural clock to 2011 or five minutes after the Obergefell decision. Hah, how naïve!” That sounds pretty great to me. And I’m not alone.