My Life With Bad Books

What’s going on when we feel guilty about reading “bad” literature? 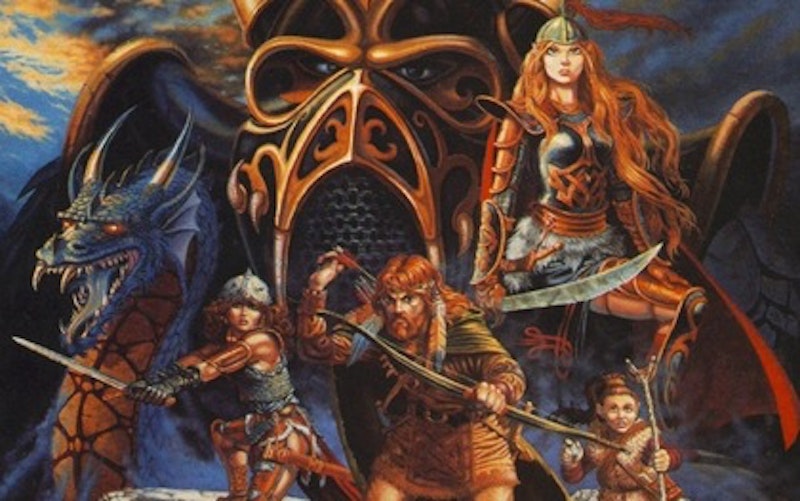 Splice Today writer Iris Smyles and I recently attended a holiday party thrown by Harper’s at the Housing Works bookstore in Manhattan. Iris and I stood in the balcony watching the people circulate between the library shelves. They clotted in convivial groups and in most of their hands rested pieces of pizza. A projector painted the wall with a pale and huge procession of Harper’s covers from the year and inane music played loudly enough to elevate conversation to a kind of social shouting but not loudly enough to stifle it. Iris and I briefly discussed some of our favorite novels, and I realized by the end of our conversation that despite the fact that I had received an ostensibly good liberal arts education I was not particularly well-read.

I’ve spent most of my life reading novels that richly deserve their reputation for lacking literary merit. When I was seven years old my family took a trip to England and Ireland and I spent the entire time absorbed in re-reading The Dragonlance Chronicles, a series of novels whose only praiseworthy quality was their immense length. They joined their brothers in the fantasy genre in the wholesale looting of J.R.R. Tolkien’s own rather boring works, and they added the additional crime of being tied in to the Dungeons and Dragons franchise. The prose was leaden and portentous and the plots overwhelmingly preferred complication and deus ex machina reversals to coherent or interesting movement. The characters limped virtually unchanged from Lord of the Rings although in most cases they lacked even the moderate depth and charm of Tolkien’s cast.

I remember little of the plot of Dragonlance, and the Wikipedia summary is so long and unreadable that I won’t bother to repeat it here. But in Britain, at seven years old, the book entranced me. “Look, Ari!” my parents would say, “the White Cliffs of Dover!” I would grunt and read about somebody stabbing a dragonoid. “Look Ari! Stonehenge!” they would cry, and I would get out of the car long enough to be photographed in front of it and then return to reading about somebody’s final exam at wizard school. “Look Ari! An ACTUAL CASTLE!” they pleaded every few miles, and I would dutifully get out of the rental and walk up some worn stone stairs and stand on a battlement overlooking fields and green dripping forests, resting my hands on crenellations laid seven hundred years previous and wondering when I could get back to reading about a fictional castle infested with banshees.

I was a horrid little nerd.

Towards the end of high school I grew out of it, shelving my awful science fiction and fantasy novels and taking up a smattering of classics and contemporary literary fiction. I no longer wanted to be seen reading a slim trade paperback with a busty barbarian woman on the cover—it was much cooler to slouch around Connecticut in a flannel shirt reading Vonnegut and John Irving, listening to Pearl Jam and being extremely sincere about everything. Throughout college I pursued the same course, buying books mostly at the campus bookstore (which stocked few sleazy sci-fi novels), and dipping occasionally into the best-selling but nonetheless self-consciously literary novels of the time. I read Two Years Before the Mast and Blood Meridian, and I read The Amazing Adventures of Kavalier and Clay and The Crying of Lot 49 and The Wind-Up Bird Chronicle and I read various others. I took the introductory English sequence and read through The Faerie Queene and The Canterbury Tales and Milton and Pope and poets both terse and long-winded; I got a fair number of Greek and Roman authors under my belt. But I never felt like one of the wonderfully self-assured academic writers of the nineteenth century who could drop allusions to truly obscure Greek heroes the way that you or I might refer to Justin Timberlake.

In grad school I was mentally exhausted and had reached an age where I really didn’t think that it would improve my chances with the opposite sex if I concealed a love of stigmatized literature, so I picked up where I left off with sleazy sci-fi and fantasy. I found some authors who were actually good writers and who chose to write imaginative fiction rather than more grounded literary fiction (Gene Wolfe, Jack Vance and Jeffrey Ford come to mind, as does H.P. Lovecraft), and I found a great deal more authors who had very little talent in any genre.

But I still on occasion feel my stomach quiver with guilt when I pick up a bad book. It’s hard to say, in this postmodern era, what makes a book bad, and of course there is a huge amount of room for taste in literary reception. But let’s lay our a few of the less contentious ways in which a book can be bad:

- It can be badly written—the writer can string together sentences that are at worst ungrammatical and at best unmusical, unoriginal, and uninteresting.
- It can have an incomprehensible, or nonsensical plot.
- Its characters can be irritating, unrealistic, paper-thin, etc.

In my experience when a book is bad in only one or two of these ways it can still be very entertaining, in the same way that the movies about giant animals produced by the Sci-Fi channel can be entertaining. This is not a wildly original thought, and most readers must recall at least one bad book or movie that they enjoyed.

Yet book reviews, and popular conceptions of books, often fall into a regressive trap where they judge literature on a scale of moral value. On the one hand we have trash, work which is held to contain nothing aesthetic or ethical, and on the other hand we have valuable work, work which possesses an overwhelming aesthetic beauty or which is morally instructive. Of course nobody really talks about the moral of a novel anymore, but the idea is still there, coasting along beneath the surface. We judge modern novels mostly by the depth and richness of their characters, and by their power and breadth of their themes. But this is just morals in disguise—we’re supposed to learn something about how humans deal with one another and with larger issues. A novel that tells us the truth about this is supposed to be good—think of Andre Dubus’ nuanced portraits of couples, Vonnegut’s heartbreaking accounts of war, Margaret Atwood’s savage diagnosis of male power. The implicit assumption is that merely by reading these insightful and finely grained works we will improve ourselves.

The American Tract Society, around the 1830s, published a number of tracts on novels; perhaps unsurprisingly, none of them recommended reading novels at all. “Beware of Bad Books” and “Novel-Reading” describe the moral and financial consequences of reading novels—like many of their contemporaries they focus special ire on Edward Bulwer-Lytton, now most popularly associated with a prize for bad writing. Popular novels were derided as distracting readers from the Bible (the only book guaranteed to be morally instructive), inciting crime, wasting money, eroding social connections, and destroying the minds of their readers. “If a good book can be read without making one better, a bad book cannot be read without making one worse,” they state simply.

In the same anthology as these tracts I recently read Ten Nights in a Barroom, a fantastically popular temperance novel that extolled the virtues of temperance and showed, graphically and hyperbolically, the moral and physical consequences of drinking. Ten Nights in a Barroom, to a modern reader, is by turns boring and maudlin but it never fails to be morally instructive. I found it to be something like a David Lynch movie (though unintentionally), one chapter maintains an almost unbearable focus on a family in a little house. The father is suffering delirium tremens and the daughter has been struck on the head by a thrown highball glass and is dying. The father hops in and out of bed and shrieks and the daughter lapses in and out of saintly conscience.

Ten Nights got me thinking about the modern culture of book reviewing and the covert insistence on moral quality in literature. The film critic Manny Farber used two terms, white elephant art and termite art, to address essentially the same issue. White elephant art is art that strives consciously for greatness and merit and by so doing makes itself clumsy, unlikable and bad. Termite art infests non-arty genres and chews away at their boundaries, daring to create interesting and valuable things in genres that are not supposed to have them.

Dragonlance was not termite art—it was just bad. I tried to reread it recently and found myself flushed with embarrassment, not because I felt people watching me read a book pretty clearly stamped with the hoofmarks of a serious dork, but because the writing was so deeply, truly awful: tin-eared and preachy. I’m certainly not suggesting that anyone should read Dragonlance, but I do think that both readers and reviewers need to think at least briefly on the implicit criteria by which we judge books. In this routine moralization we may needlessly denigrate some decent, entertaining books, and pointlessly elevate some pompous, uninteresting works.