Give Rupert Murdoch a Round of Applause

The 77-year-old media mogul/troublemaker still believes in newspapers and is saving jobs, as seen in Michael Wolff's excellent new biography The Man Who Owns the News. 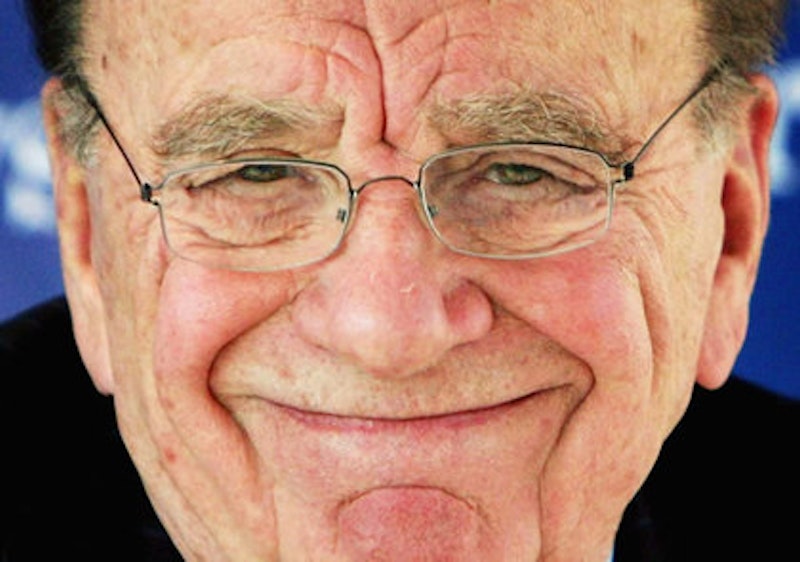 It’s great sport for liberals and conservatives to engage in arguments over who’s the most obnoxious mouthpiece/media personality espousing their respective political views. You bring up Keith Olbermann, MSNBC’s dreadful faux-Edward R. Morrow, and my blood pressure will no longer rise since a response is well rehearsed. It’s a lay-up. On the other hand, toss out the bait of Fox’s Sean Hannity and it’s likely a “progressive” will also have a rote comeback. We’ve collectively been engaging in this sort of repartee for years now, so much so that’s it’s no longer bitter, but rather just a pinprick.

There is, however, one name that stops left-of-center partisans cold, leaving them temporarily befuddled, trying to figure out an appropriately vicious retort. That man is, as you might suspect, News Corp.’s Rupert Murdoch, the communications industry entrepreneur/provocateur, a modern media icon who’s so complex and mystifying that he’s simply not in the same league as cartoon caricatures such as Ann Coulter, Maureen Dowd, Rush Limbaugh, Jon Stewart, Olbermann and Hannity.

Murdoch, now 77 and reportedly in fine health, has been the subject of numerous books, mostly written by disgruntled ex-employees, but no one has yet managed to capture the Byzantine nature of the native Australian with the precision of Michael Wolff, whose The Man Who Owns The News (Broadway Books) was released earlier this month. Perhaps that’s because Wolff, a Vanity Fair columnist and founder of newser.com, has no score to settle with Murdoch.

The book revolves around Murdoch’s audacious, and protracted, purchase of Dow Jones Co. (which publishes The Wall Street Journal) in 2007, with interruptions detailing the facts of his professional life—most of which are familiar. The vignettes of the negotiations between the News Corp. squad of yes-men and the far-flung, disengaged, fractious Bancroft family, which had owned Dow Jones for more than a century, juices the book. That Murdoch, reviled by the Bancroft clan—which for decades insisted the Journal would never be sold—pulled off this deal by offering the inflated price of $5 billion was, aside from the collapse of the newspaper industry, the most astonishing story of this young century.

And before proceeding, one truth ought to be made clear: Murdoch deserves the accolades of journalists everywhere, regardless of politics, opinions about the quality of News Corp. holdings or his business strategy. People may not like the man or what he allegedly symbolizes, but his acquisition of the Journal, much to the chagrin of his own company’s shareholders, saved what is, along with the now-beleaguered New York Times, the most influential and high-quality daily newspaper in the United States and perhaps the entire world.

Had Murdoch not schemed to cap his career with this latest takeover, it’s likely today the Journal would, like other dailies, have less staff and a bleak future. Who else but Murdoch, consistently described by Wolff as first and foremost a “newsman,” would make such an extraordinary gamble on a company rooted in newsprint? As for Murdoch’s detractors in the media—which means almost everyone except those in his employ—who grandly and instinctively predicted that the Journal would morph into a larger-circulation version of The New York Post, with celebrity scandals and lottery ticket promotions crowding out serious business coverage on page one, well, they’ve been proven wrong.

Wolff, who on a much smaller scale has made his own share of enemies (many as a result of the New York magazine media column he wrote for several years), is successful in his biography of Murdoch because of his intense curiosity, and extensive, candid interviews with the man himself, his current wife, children and assorted apparatchiks around the globe. One of the themes of The Man Who Owns the News is that nothing delights Murdoch more than business and media gossip, nuggets that will suddenly brighten his spirits and re-ignite his short attention span. Wolff also revels in gossip, and that’s why the two of them make an outstanding match as mischievous inquisitor and subject.

A few things observers may not know about Murdoch:

—He can’t stand Bill O’Reilly, the pompous Fox News host who, after a lackluster career hit paydirt with his bombastic O’Reilly Factor many years ago. Yet Murdoch won’t touch O’Reilly. It’s not dissimilar from a Major League Baseball general manager who suffers the immature behavior and impolitic grandstanding to reporters from a superstar. Say, someone like Alex Rodriguez. You don’t mess with the talent.

—Likewise, Fox News CEO Roger Ailes, whose own list of enemies rivals the Manhattan phone directory, is an untouchable in the News Corp. hierarchy, again because of success and also, as Wolff intimates, that even Murdoch is somewhat fearful of incurring his wrath.

—Wolff can’t let go of the simple, and unremarkable fact that Murdoch, who never cared about fashion until meeting his third wife Wendi Deng, wears “singlets,” the Australian phrase for sleeveless undershirts. (In the U.S. this garment, which largely disappeared in the early 1960s, is alternately called a “Wall Street” or “wife-beater,” depending on whom you’re speaking to.)

—According to Wolff, Murdoch doesn’t read books, watch television or movies, has zero interest in sports or pop culture; in other words, any of the topics that can lubricate a conversation before moving on to the business at hand. That, of course, didn’t stop him from buying (and selling) the Los Angeles Dodgers, and obviously his television and movie units have made him a lot of money. In fact, had Murdoch not started the Fox Network to compete with CBS, NBC and ABC, it’s very possible that Matt Groening’s The Simpsons would’ve never found a home.

—Murdoch’s obsessed with The New York Times, especially since current publisher Arthur Sulzberger Jr., whom he regards as a “New Age” lightweight took over control in the early 90s. Wolff writes: “Murdoch has been watching the Times’ strange behavior and spastic reactions with as much interest and appetite as he has for anything in the media business. The Times is his favorite train wreck—as well as, perhaps, his ultimate opportunity.”

—Murdoch’s four grown children, as well as his wife, are all somewhat liberal, as opposed to the arch-conservative image that the old man has. (Wolff, mistakenly I believe, says that Murdoch, along with Ronald Reagan and Margaret Thatcher comprised the defining zeitgeist triumvirate of the 1980s.) In fact, Wolff isn’t the first to point out that Murdoch’s politics are a matter of personal convenience, that even though he may truly believe in conservative tenets such as free markets and a staunch defense of Israel, first and foremost he believes in himself. Yet the political views of his children are significant, particularly current heir-apparent James, since despite Murdoch’s Twilight Zone notion that he’ll live forever, sooner rather than later he’ll bite the dust and the entire slant of News Corp. likely will be greatly altered.

The Man Who Owns the News is an engaging, breezy yet extraordinarily well-sourced book that is now the definitive biography of Murdoch. Michael Wolff has taken some flak for his writing style, but I find his use of the vernacular quite refreshing and a welcome respite from those, like The New Yorker’s pompous and fastidious Ken Auletta, who’ve written about Murdoch in the past. (Wolff isn’t shy, unlike more “respectable” journalists, to say that Murdoch admires men and women who have “the balls” to make a deal, or that buying Dow Jones was a giant “fuck you” to the pedigreed members of the media who despises him.) Wolff’s prose is a cross between, especially in the context of this book, the Journal and New York Post, authoritative and a little bit sleazy at the same time. It’s a winning combination.

At the end of The Man Who Owns the News, Wolff offers perhaps his most succinct characterization of Rupert Murdoch: “[He] is a troublemaker—one of the last great troublemakers in the holier-than-thou, ethically straitjacketed news business.”

Since the galleys (and Vanity Fair excerpts) of the book appeared, Murdoch complained to Wolff about the often very intimate dissection of his personal life. What’s fair is fair, though: Murdoch agreed to scores of interviews with Wolff and gave him access to his family members. Yet, despite the pro forma protests, my bet is that Murdoch was quite pleased at the portrait of him being a “troublemaker” who vexes and infuriates and defeats those who think they’re morally and intellectually superior.