A Pompous Habit Found Among Backpackers 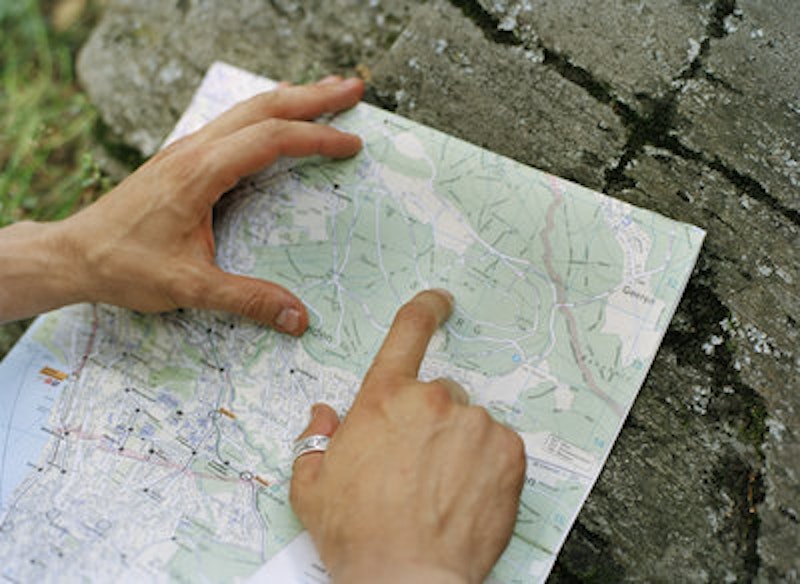 Let's say you want to know something about a travel route. Don’t ask a tall, heavy-framed young man who's standing near a wall map. “Okay, come over here,” he’ll say. He's going to use that map, and you'll have to stand beside him while he does so. I found this out early on, in the common room of a youth hostel in Mexico. I asked how many kilometers between this city and that city—a number question. The guy wanted to show me on the map. “Oh, I've got to do this,” I said and held out my broom, because I was sweeping up the hostel's kitchen, and the fellow turned away. Just like that: no map, no interest. I thought that was funny, but I didn't like it.

Months later I had a second map encounter, and this time I decided what the hell. After all I wasn't sweeping up, I was just standing there making conversation, and my question wasn't about kilometers. How did people get from Guatemala into Mexico without going through Chiapas (which had obnoxious border rules)? My friendly, interested conversation partner turned toward the wall map. “I'll show you,” he said. “Come over here.” I went along.

A couple of minutes later I knew that the route ran up here and skipped over this to get there. Simple information that did no harm. But I saw the guy as pulling a maneuver. He had a childish need to loom above somebody and instruct, and the map was his means of doing so. It was his tool for turning me into a prop. A harsh view, but I think events proved it out. I traveled with the guy a while, and his compulsion kept growing. Finally, in the depths of rural Cuba, he’d lay his arm across my chest to keep me from crossing the street too soon. No reason to think I was going to dash—it was hot—and no traffic to worry about. No people either. It was the weekend and quiet, and notable mainly for how little can be seen along a stretch of Cuban roadway. But he sighted toward one horizon and then the other, and while he did this he sternly locked his arm in place. Next road or street, same thing. There were long trudges from one to the other, but he didn't forget. It was a compulsion: he had to have his boost.

I'm a man, not a good-looking girl, and this fellow and the one at the hostel weren't homosexual. They were copping a feel on their thing, their gimmick, the crutch that told them it was okay. They were fingering their sense of superiority, the way a trim girl pats at her midriff. Some kids see themselves as walking examples for the others, demonstrations of the way forward. These kids make a big thing about maturity. They act it out, and they want to be noticed. A lot of rangy, high-breasted girls fall into this group, and so do a lot of husky young men. The girls tend to be noisy about it, the boys more crafty and matter of fact. “Yeah, right over here, I'll show you on the map.” It isn't an order, but it isn't a request. He's laying out an action plan. Good luck. If you go over there, you are his stooge.